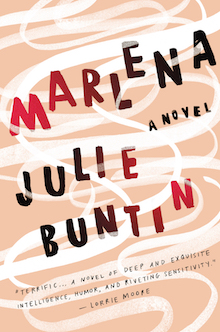 In her debut novel, Marlena, Julie Buntin dismisses any notion of suspense almost immediately. Cat, the novel’s retrospective narrator, reveals that Marlena, the reckless and pill-addicted seventeen-year-old she befriends upon moving to rural Michigan, dies at the end of the first summer the two spend together. By the end of the novel, readers have seen evidence to anticipate Marlena’s death, but the novel concerns itself with much more than her death, opening itself up to examine the friendship that emerges between the two unlikely-paired teenagers. The friendship is remembered in long stretches of flashback, intertwined with chapters from Cat as a thirty-something New Yorker, clearly still affected by the relative short period of time she spent with Marlena. In these fleeting moments of contemporary Cat, Buntin excels and turns Marlena into more than just a novel of two troublesome girls experimenting with sex, drugs, and alcohol. The allure of following Cat and Marlena’s budding friendship certainly propels the novel, but in the New York-based sections exposing Cat as a barely-stable, borderline alcoholic desperately at odds with her job and in her relationships, the novel earns its protagonist empathy and shows itself to be a complex examination of how one’s past influences the present.

The novel’s opening line serves as a kind of thesis, a sentence crafted as much for its poetry as for its meaning. “Tell me what you can’t forget, and I’ll tell you who you are,” Buntin writes, giving her protagonist a voice that sounds at once meditative but also slightly uneased. This present-day Cat immediately sinks into reflection, the memories intended to inform her current life. Her first recollection is of herself and Marlena barreling toward Lake Michigan beach, Marlena barely in control of the van she pilots toward the water. “She’s not going to stop,” Cat recalls, “and for a second, I feel something foreign, a rage that’s equal parts hunger and fear. Do it, I think, do it, and my stomach’s in my throat but I’m so tired of being the one to say no, be careful, stop.”

That sense of rage Cat experiences, the thrill of living dangerously while somehow recognizing the very threat of that danger, sticks with her into adulthood. Twenty years after Marlena’s death, Cat lives a life haunted by her late friend, a claustrophobic existence that she seems neither able to escape nor willing to forget:

I switch off my apartment light and she comes with the dark. The train’s eye widens in the tunnel and there she is on the tracks, blond hair swinging. … I’m fumbling with the key outside my apartment door, my eyes meet my reflection in the hallway mirror and I see her, waiting.

Cat encounters Marlena in the first place because she’s moved with her mother and older brother to a part of the state where housing is affordable and Cat’s mother can get the most out of her ex-husband’s alimony. As Cat and her family settle in, the relationship Cat forms with Marlena stabilizes a whirlwind period of insecurity and anxiousness. “I acted as her mirror,” Cat reflects on her early interactions with Marlena, and from that point onwards, Marlena’s influence only continues to strengthen, mostly due to a youthfulness unseen in other women in Cat’s life. In a telling moment watching her mother prepare for a date, Cat ruminates on her mother’s fading youth:

She didn’t look old, but there was something in her face — you’d never take her for a girl as young as us. I was always aware, in some buried place, that girls my age had just entered their peak prettiness, and that once my pretty years were spent my value would begin leaking away. I saw it on TV and in magazines, in the faces of my teachers and women in the grocery store, women who were no longer looked at, and I saw it when my mother sized up me and Marlena, some memory flickering in her eyes.

The aspect of beauty — of value and worth — spurs Cat to follow Marlena, but the long-term effects prove detrimental.

In present-day New York, Cat details the difficulty of forming friendships with women, noting the need for “dim places with complicated wine lists and small plates for sharing” while seeking a feeling of security and familiarity: “Like sex and cooking and watching bad television, like eating, like existing in the world after twilight, talking has become difficult for me without a drink.” The necessity of substance comes from a desire to feel complete, and of the women she meets and seeks to befriend, the one constant Cat notices is the echo of influence, the idea that every women she meets has, at some point, become who she is because of someone else:

Any and all tics, hand talkers, fidgeters, lipbiters, eye contact avoiders, the women I instantly adored who got too close when she was trying to make a point, who would put a hand emphatically on whatever part of me she could reach and try to touch me into understanding. I notice, and I begin to see the outline of the best friend, the girl she shaped herself around, according to. For so many women, the process of become requires two. It’s not hard to make out the marks the other one left.

And for Cat, the “other one” — Marlena — has left behind a best friend striving to become whole while simultaneously recognizing the influences of the past while also trying to escape them to some degree.

That divide, echoing the first line of the novel, continually makes Marlena such a fascinating exploration into how one’s life evolves from traumatic beginnings. As a narrator, Cat continually reveals herself to be an intriguing study in how one overcomes — and remains tied — to the past, and as a novel, Marlena demonstrates an author’s deft ability to capture such a condition.

Julie Buntin is from northern Michigan. Her work has appeared in The Atlantic, Cosmopolitan, O, The Oprah Magazine, Slate, Electric Literature, and One Teen Story, among other publications. She teaches fiction at Marymount Manhattan College, and is the director of writing programs at Catapult. She lives in Brooklyn, New York. Marlena is her debut novel.