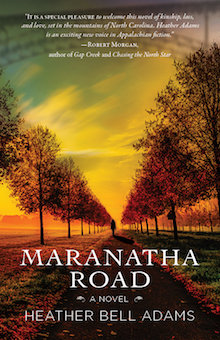 Appalachian fiction has a reputation for its split-knuckle prose, lean and raw, which pummels its reader into a vicarious experience of a hard-scrabble life in decaying towns, complete with heavy drinking and labor in the mines, lumberyards, or rail shops. This is the Appalachia that readers of J.D. Vance’s toxic Hillbilly Elegy have come to expect, an Appalachia blighted by addictions and poverty.

But Vance’s polemic is a parody of Appalachia, and novels like Heather Bell Adams’s Maranatha Road offer a much-needed corrective to Vance’s politically expedient fatalism. Maranatha Road searches for the definition of the modern family in the North Carolina countryside with prose as lush and poetic as the region’s vibrant bursts of trees, kudzu, and crops. The novel tells the story of Tinley Greene and the Caswell family, who grieve the untimely—and avoidable—death of the Caswells’ son Mark. Consisting of four parts that span from the late 1990s to 2001, the novel alternates between first-person narrators to reveal the fantasies of family that first Tinley, and later Sadie, weave in order to cope with losing Mark.

Adams doesn’t wait long to disabuse her readers of the notion that families are static affairs. The novel begins with Tinley, then sixteen years old, watching for her parents’ return from a grocery trip, without knowing that a car accident on a bridge has claimed their lives. While waiting, she does laundry in the landlord’s basement and sees “the irregular shape of North Carolina in the wood’s lines. Choosing a board on the left—the western part of the state,” she confides, “I trace the bumps in the wood, pretending they’re places my parents have gone.” In domestic realism’s confining architecture, Adams allows Tinley to feel, like so many letters in Braille, the complete history of her own family.

After her parents’ death, however, a sequence of calamities quickly befalls Tinley: she becomes isolated from her high-school classmates and riddled with depression over her parents—“day after day,” as she puts it, “of wanting nothing but to hide in the trailer by myself sniffing around for hints of Mama’s hand cream and Daddy’s aftershave.” She suffers sexual harassment and abuse at the hands of Haughtry, the predatory landlord—but Mark Caswell’s unlikely arrival, to ask Haughtry about road access for the lumber company, grants Tinley an escape from Haughtry’s theatre of horrors.

When Mark guides Tinley away from Haughtry’s property, her mind raptures over her young deliverer: “The boy holding my elbow looks like he’s built out of something different than the rest of us—like some part of him is made from the sun.” Not knowing what to do for her, Mark hides her in a rental house owned by his parents and begins tending to her every want. In a perplexing (and perhaps too convenient) plot turn, Tinley rapidly falls for, and soon has sex with, Mark.

Tinley’s sudden (and problematic) burst of beatific adoration for Mark persists for much of the novel—she judges other characters based on their resemblance to Mark—but it serves an essential dramatic function. She knows only the gallant, white knight Mark, not the young man with a history of depression, a well-to-do fiancée, and a terse relationship with his parents Sadie and Clive Caswell, whose childrearing philosophy is a combination of Appalachian stoicism and gruff faith in their son’s ability to do right by himself.

That is, Tinley’s euphoria over Mark betrays how little she knows about his inner life and those in his circle; she cannot know that he will not call off his upcoming marriage, or that he cannot confide in his mother, or that his natural inclination toward depression and sullenness will spike when Tinley—desperate to build a new family with Mark—tells him that she is pregnant.

Adams’s novel shares this much with the terse minimalism of other Appalachian writers like Jayne Anne Phillips, Breece D’J Pancake, or Ron Rash: she has a natural ear for the region’s spare (but subtext-freighted) language, and she has a grim awareness of the consequences of refusing to communicate our fears and anxieties. True to type, and because of his undiagnosed depression, Mark cannot accept himself as, to use his own words, “[s]omebody who takes things too far, who gets in too deep before he knows what kind of water he is in.” He can plot only one resolution to “doing wrong by [his fiancée] Maddie,” violating Tinley’s trust, and betraying his mother Sadie’s esteem in him: he leaps over a bridge and into a precipice below, leaving Tinley and Sadie to witness the aftermath of first responders crawling over the scene, powerless to affect any change.

From here, Adams alternates between Tinley’s and Sadie’s points of view. They clash: Tinley pleading with Sadie, Sadie blaming Tinley for Mark’s death. Tinley embarks on a solitary quest for family, which sees her settling in with a childless couple at a seasonal camp through her pregnancy and, after giving birth, almost settling with another Mark lookalike whose work as an insurance salesman offers a fleeting vision of middle-class stability. Sadie turns inward, leaving her husband Clive until his terminal illness draws her back to Garnet—back to confront the history of her family and its future in Tinley Greene. When Sadie visits Clive’s bedside, Adams’s masterful use of alternating first-person narrators again reveals the tragedy wrought in this family by failures of communication: “He [i.e., Clive] looked at me like he could change my mind, and I thought about all the things he didn’t know. [. . .] He didn’t know I’d sent her [i.e., Tinley] away, he wouldn’t have understood.”

But in the characters’ unspoken conflicts lies the small grace of Adams’s Maranatha Road, the crossroads where it insists on a turning away from the narrow brutalism of Vance’s Appalachia. In Maranatha Road, Adams plants the seeds for redemption by staging a final, recuperative encounter when Tinley and baby Rebecca park at the driveway of the Caswell family house on Maranatha Road, with Sadie watching. “For a second,” Tinley tells the reader, “the last bit of resentment clings on.” But Tinley and Sadie each cross this final threshold, coming together and fulfilling Maranatha Road’s vision of how adversity can transform family—if only we let go of our fantasies and our old resentments.

Heather Bell Adams is from Hendersonville, North Carolina, and now lives in Raleigh with her husband and son. Winner of the 2016 James Still Fiction Prize, her short fiction appears in the Thomas Wolfe Review, Clapboard House, Pembroke Magazine, Broad River Review, and elsewhere. Maranatha Road is her first novel.

Patrick Thomas Henry is the Associate Editor for Fiction and Poetry at Modern Language Studies. His work has appeared in the Massachusetts Review, Souvenir Lit, and Duende, amongst other publications, and is forthcoming from Fiction Southeast and Passages North. He teaches creative writing at the University of North Dakota.