Machines of Another Era by Bess Winter 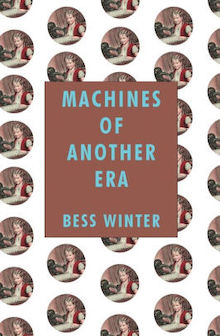 Why do we read fiction? To escape what we dislike about our lives? To defy what we deem culturally, spiritually, technically, physically, or morally unjust? To examine objects, people, and situations so closely that we are able not only to see the worlds they contain, but also to step inside them? The answer is, of course, all of the above. We read because we are obsessed; because we are bored; because we are angry, bewildered, fed-up; because we are curious. The stories of Bess Winter respond to all of these impulses and then some.

Winter’s debut collection, Machines of Another Era, may at first appear to be a narrative curio cabinet, full of bright, pulsing story-objects connected only by their uniqueness. But while the pieces in the book are distinct and do employ diverse containers and modes, they flow into and through one another so continuously and completely that at times, the book seems to breathe.

The stories share clear commonalities: the frequent appearance of children, dolls, and horses; a dollop of the otherworldly; a lack of easy (or perhaps any) answers. One essential notion that links these stories is uncertainty. Uncertainty is often perceived as weakness, but Winter’s stories gently remind us that we’re all functioning in a general state of confusion. Uncertainty is the norm, not the exception.

In “A General Confusion Overtook the Whole Vicinity,” a confectioner in Civil War-era Illinois attempts to break up a brawl between a Union and a Confederate soldier:

Mrs. Jeffries charged. Gaining speed, she locked eyes on the brawling pair. She aimed right for Eli, who failed to notice the pistol Caleb finally produced from the holster at his side, lifted to Eli’s beautiful jaw and — time unbearable slow, now, as Mrs. Jeffries hurtled toward this disaster — shot him, bullet blasting his Union cap right off where it tore through the back of his skull.

But this fantastic passage doesn’t even scratch the story’s surface. Other elements include a chorus of hashish candy-sucking farmers, a girl torn between two men, and the confectioner’s own deeply buried story of loss. At once funny and tragic, the story is full of movement and detail. It situates us in a time and place no one alive has experienced, yet every aspect is instantly identifiable: “Caleb, with some difficulty, lifted the shaking hand to his toothless mouth and tumbled the candy inside. Nothing to look at now but the puckered lips and bloodied cheeks, heaving in and out as he sucked, like a horrific baby falling asleep at mother’s breast.”

All writers deploy detail; few do it like Winter. To say that she is obsessed with objects — the buried bones of French prisoners of war, the thin straps of the IKEA shopping bag that cut into the shoulders of a character who shares her name, Koko the gorilla signing the word nipple, an omelet Gabriel Garcia-Marquez’s dead mother cooks for the writer’s brother — is putting it mildly. These details are not merely ornamental. They serve a larger purpose: They have a special role to play in historical awareness. We only grasp the present by looking at the past in all of its detail.

Winter’s work is often set in a past, real or imagined — a choice that may puzzle some readers. Why look at the past? Don’t we already know what happened? The answer is, of course, no. Our attempts at history are all horribly flawed, not to mention one-sided, and if we’re honest, the past is more of a mystery than the future. In “The Stories You Write About Mimico,” Winter explores this idea to dazzling effect. Structured like a nesting doll, the story swaddles a personal piece of writing in mitigating layers of research, detail, and invention. The cast includes a horse-raising Italian immigrant and his family, a struggling Hungarian artist, a jazz composer, and a girl named Bess. All inhabit the same place — a neighborhood called Mimico — at different points in Toronto’s history. Throughout the piece, their discrete historical contexts bleed through to touch one another gently, just as the jazz music of one era drifts through the others.

At the heart of the story is Bess, who spends her time researching and observing Mimico even as she inhabits and is inhabited by the neighborhood. Consider this passage:

One of the men, Mr. Franceschini, is familiar to the horses. You aren’t a horse, Bess, but you recognize this man, too, from curious nights spent researching the complex you’d moved to, the strange, hollowed out mansion at the center of it, and its foreboding old gardens peopled with headless putti. The horses know Mr. Franceschini’s smell and they know, even now, that he is ill, that every day he grows more and more ill, though he still doesn’t know it himself.

Winter’s use of her own first name for Bess is a sure sign of her recognition that any re-creation of events invariably involves fictionalization. Gorgeous, daring, haunting, inventive, engrossing, funny, “The Stories You Write About Mimico” asks how much we can ever know about anything — an object, a situation, a homeplace.

Machines of Another Era thrums with the idea that we exist in a continuum of moments, hours, and days. Subtly but distinctly braided with Winter’s essential questions about knowledge and confusion, this idea is what makes the book cohere. Together the stories in Machines of Another Era weave a tapestry — at some points transparent, at others opaque — that, like all art, manages to hide and unveil just what we need, when we need it.

Bess Winter is assistant Professor of English at Eastern Illinois University, where she serves as editor-in-chief of Bluestem. Machines of Another Era is her first book.

Jen Fawkes is the author of Mannequin and Wife: Stories (2020 LSU Press), and the forthcoming Tales the Devil Told Me (Press 53), winner of the 2020 Press 53 Award for Short Fiction. She lives in Little Rock, Arkansas, with her husband and several imaginary friends.