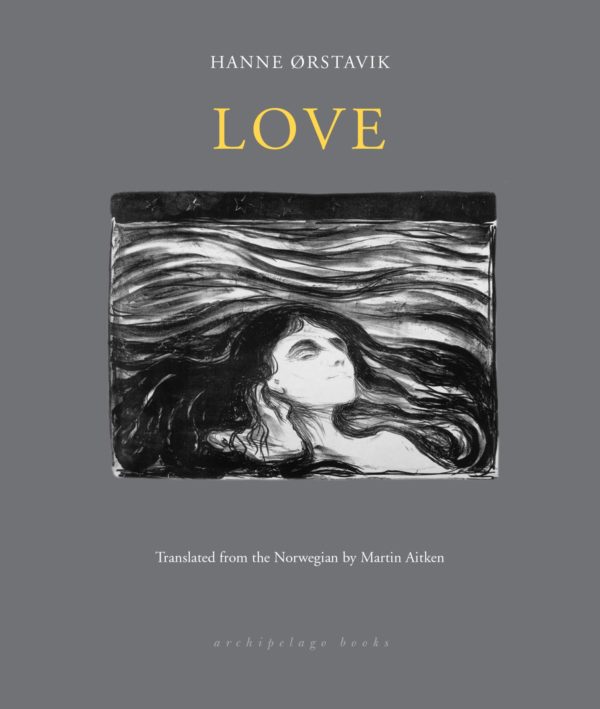 Toward the beginning of Hanne Ørstavik’s novella Love, protagonist Vibeke muses to herself while looking out of her living room window onto the small Norwegian village where she has recently moved. She thinks, “We need to address architecture, the way it brings things together.”

Vibeke works for the town as an Arts and Culture officer, and she’s just returned from work, so her mused thought fits snugly into what the reader is slowly learning about her: she’s a single mom with a new job, living in a new town, and she has a young son. But there is already a hint of a deeper meaning. Ørstavik doesn’t waste words; Love is a tiny story, each sentence carefully weighted amidst a larger whole—and this seemingly throwaway thought is actually the first unmistakable admission that the novel’s architecture will play a bigger role in the book. Because already by the time we read Vibeke’s opinion of the village’s design in her thought on page ten, Ørstavik has taken us through five enjambements shifting between the perspective of Vibeke and her eight-year-old son Jon. I’m using the poetic term deliberately here, because while at first these shifts feel completely natural as Jon and Vibeke are sharing the same space and their perspectives piggy back one another like this:

She sweeps her hair away from her face, gathering it in front of her shoulder and smoothing it with her hand, pleased at how long it’s grown at last.
He hears her footsteps on the floor above. Her shoes. Vibeke always wears shoes indoors. Sandals with a low heel.

Later, when the two are moving about town on their own, the shifts become a staccato, and create a lovely dissonance when it isn’t always clear to whom the pronouns are referring:

He watches the water as it flushes away, thinking suddenly of the light of summer, the way he can lie in his bed and look out the window, the sky completely white, feeling himself dissolve.
“We’re moving on tomorrow,” he says, stirring coffee granules into another mug of hot water.

The two “he’s” in these lines are not the same, and it takes a moment to re-focus on the correct frame. We’ve moved from children to adults, and the echoes are meaningful in the greater context of the story and the displacement of its different characters. And especially this image of the young Jon dissolving, and the mention of moving on. These are wonderful hints of what lies in store. This pattern of rapid, unexplained shifting will continue to the end, becoming sharper and more unsettling, and it is an integral part, like in a poem, of the novel’s tension, creating varieties of meaning at their edges.

Love recounts the events of a single evening, beginning in the late afternoon on the day before Jon’s 9th birthday. It’s difficult to list these events without giving away too much of the book, but this isn’t because they are big, explosive incidents—they’re not. Ørstavik details a series of commonplace and domestic moments. But there is an inescapable and escalating sense of anxiety as the story unfolds, mostly accomplished through the subtle juxtaposition of images that bring a sense of menace to what should be an ordinary afternoon and evening: a leather dog collar hanging from a chain on a wall, photographs of someone being tortured, a piece of fruit wriggling with maggots.

Added to this is the otherworldly, almost fairytale landscape of the novella’s setting. A small village covered in a deep snowfall, and currently hosting a traveling circus. There is also the nighttime element, the heavy darkness, and the intense cold. Multiple characters fall asleep within various scenes, often unexpectedly. The circus, although dealt with lightly, introduces the idea of carnival, of a world turned upside down. Also, when we first meet Vibeke it is through her fixation on books and reading. She’d rather live within the pages of a book than in her real life. And there is also the realization that almost everyone in the book is a stranger to one another—Jon and Vibeke are newcomers to town, and the people they meet from the circus will be leaving again the next day. All this tips the balance of the book’s atmosphere toward the surreal.

One of the most interesting elements of the novella, and an ingredient in its final, devastating outcome, is the distance between Vibeke and Jon, who revolve around each other so carefully but with very little actual interaction. In the scenes in which they are together, Jon orbits his mother, watching her, aware of her movements, giving the reader his interpretation of her. Strangely, Jon has an eye problem, and it isn’t long before we begin to wonder if he’s “seeing” clearly. Vibeke, for her part, thinks of Jon almost constantly, although it is always amidst a rush of other busy thoughts and she soon forgets him and focuses on other things. Like Jon, Vibeke has blindspots, too, and they become more and more apparent as the night deepens.

The psychological and physical distance between the two is only amplified by the repeated narrative enjambements. Vibeke and Jon are continuously connected, yet never together, and their respective thoughts increasingly encroach upon the scenes involving the other. This has the curious effect of infusing a child’s scene with an adult-like sensuality or pushing a note of Jon’s innocence up against a moment of Vibeke’s knowing awareness. It’s destabilizing and keeps the reader alert and wary. Exploited this way, architecturally, this distance can only signal catastrophe.

In many ways Love seems to be taking place within a threshold, an in-between time, a twilight & dawnlight moment that may or may not be completely real. This is a fitting notion for the dreamlike adventure we’ve watched Vibeke and Jon undertake as the novel unfolds, but this idea of threshold takes on a greater significance when we make our way to the end and find them on the last page, poised at the brink of a looming tragedy.

Hanne Ørstavik published the novel Cut in 1994 and embarked on a career that would make her one of the most remarkable and admired authors in Norwegian contemporary literature. Her literary breakthrough came three years later with the publication of Love (Kjærlighet), which in 2006 was voted the 6th best Norwegian book of the last 25 years in a prestigious contest in Dagbladet. Since then, the author has written several acclaimed and much discussed novels and received a host of literary prizes.

Martin Aitken is the acclaimed translator of numerous novels from Danish and Norwegian, including works by Karl Ove Knausgaard, Peter Høeg, Jussi Adler-Olsen, and Pia Juul, and his translations of short stories and poetry have appeared in many literary journals and magazines. In 2012 he was awarded the American-Scandinavian Foundation’s Nadia Christensen Translation Prize.