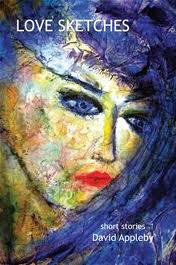 Readers of the first collection of stories by David Appleby will already be familiar with “Moon Alley”, the poor neighbourhood of Philadelphia, with McFadden’s Saloon and the elevated railway, “an environment of abandonment“ (160). Half of the 14 stories in this new collection take place there too, detailing the impoverished lives of descendants of Irish immigrant populations. But there is more here: the author has new characters to people his tales and, perhaps, new optimism. His other locus is academia – whether directly within a university setting or using characters who are academics or writers, certainly educated individuals with a different lifestyle from those in Moon Alley.

Love Sketches are snapshots, fast-drawn impressions of reality, whose characters we see from one side, in one instance. They relate facts that speak for themselves, with no apparent intervention/opinion on the part of the author. The author’s cover blurb says the collection:

…explores the sensuality of romance and the varieties and vagaries of love … Former colleagues, ‘almost lovers’, meet to discuss literature only to discover a yearning that kindles their lost romance; teenagers infused with the early flowering of romance struggle to maintain that romance against all odds; a young romantic learns a tragic lesson of love and redemption all too soon; an elderly professor devises a plan for one last try at romance; and amid an atmosphere rich in romance and sensuality two close friends reunite to reveal deep feelings they’ve held for one another, feelings which went unnourished for those years they had convinced one another they were ‘just friends’.

Most of the stories here are short (between seven and thirteen pages), one is very short (“The Graveyard of Romance” has three very effective pages) but three are longer and more developed: of these “Bus Trip” and “Sissy’s Story” are, I believe, the most successful in the collection.

The titles of the love sketches are simple and somewhat repetitive: four contain the word “romance” but none contain the word “love” – compare the author’s own description cited above. Some stories include a reference to the title at the end of the text: the first story “The Tree House” has these as its last words, as happens also in “Mother Would Be So Proud” (the last story); in “A Long Romance” and “Give and Take,” the words of the title are repeated in the last section – as if the author wants to bring the reader back to his topic before letting go, thus putting the story back into context. Five stories are told by men, four by women – narrators of different ages and backgrounds; the rest are told by the author or by different characters as the action moves forward.

“Love” then is the common denominator: young love, old love, married love, love manqué. How is the reader to interpret the stories? The anodyne titles provide few clues. Love is affection, being together, managing, survival. In Moon Alley, families are close, money is scarce, clothes hand-me-down, the church dogmatic. Love can be an escape from the daily drudge (as can drink or religion), a way to behave. There is little sexual love in the collection and where it exists, it does not liberate the characters or the reader, rather it leaves an unpleasant taste in the mouth. In “The Tree House,” a woman about to undergo a biopsy takes the narrator’s hands to caress her breasts (14). In “Do You Know What Ava Gardner Said?,” the naïve romantic narrator thinks there has been sex (not love) where there was none! In “Claire,” planned adultery comes to nothing but there is a promise of marital sex as the story ends. Not love.

The author treats sympathetically the narrator of “Mother Would Be So Proud” – a sensitive Proust-like voyeur (or pervert) who has difficulty differentiating between illusion and reality – as he does the pathetic old professor in “The Dance of Romance” who aspires to attract his young students. In fact, Appleby treats most of his characters sympathetically, albeit detailing their faults. Most of their actions are excusable – the almost adulterer Claire, because of her husband’s behaviour; the wife in “Give and Take,” because she is having “a case of the nerves” – except for the drug-taking Bobby Kelly and his girl Andine McHugh in the tragic “A Last Romance.”

“Love wears so many faces” says one character. We see them here. We also see the missed opportunities for love (or romance), for happiness. Even in the stories about married couples, there is illusion, misunderstanding, bitterness, “making do” – the wives are seen as manipulative, using sex as a weapon or a reward. On the whole, the women in the collection are full of guile, the men long-suffering and/or romantic.

Opelika, the heroine of “A Long Romance,” narrates directly her life in the big city, interspersed with letters to her friend Ruby back home, in a breathless style worthy of a women’s magazine romance – with a happy ending:

I first met him on the elevator. I was very skittish that morning, the first day of my new job; well actually the first day of my first job out of Southern Union State Community College. I was more than nervous. I was on the verge of a panic attack. I was gasping for breath; the perspiration was collecting, and soon would be visible in the usual places. The elevator stopped at the seventeenth floor, and when it had finally settled with a lurch and a hit, the doors opened and he walked in. He smiled at me. (16).

…kept their battles within the privacy of their four walls. They obeyed a Moon Alley code that held that a husband and wife ‘did not hang their dirty wash in public for all to see and hear’; they simply wrapped their private differences in a public truce that is the norm in most long-term marriages. (86).

Her constant criticism of his every move (or lack of) as they prepare to leave home (he lies almost asleep on the sofa) or while on the bus (he calculates that the casinos take about $2,160,000 per day) contrast with his memories of outings with their son Tom or his genuine concern when she cries at the casino (94). On the bus home, after their success in the casino, Regina tries to put herself on his wavelength, to be nice to James. With one hand on their winnings, “she placed her right hand on his leg. She allowed her hand to slide over the crease in his trousers, permitted her fingers to inch across the inner portion of his thigh …” Twice that day, James thought, his wife had changed faces: the first in the casino and the second on the bus: “the face of despair had been erased by the arrival of the long-sought jackpot … James saw the strange twinkle that had claimed her eyes; he saw how her smile, so clearly coquettish, was perfectly matched by the softness of her moist eyes” (97). But the reward of sexual favours (if we can call it that) was not enough: James sat straight and stiff “and in his aching heart he felt only the deep yearning for the good old days. Good old days that had been free from terrors born of change” (97).

“Sissy’s Story” is the longest and most developed story of the collection (almost a novella), divided into a prologue and seven scenes, where various pairs of female characters interact to provide background and action to the story: Sissy Shannon, her mother Mary Anne, her daughter Jelly; her godmother Joan Ratigan; her friend Shana Hughes and daughter Raven; Dr Selma Resnick. This is the most positive of the stories, with no underlying criticism of the heroine but an admiration of her determination to escape, through education, the misery of life on Moon Alley. There is more to say in this story, continued in a different format. It certainly is not a romance.

Novelist and short-story writer William Boyd has spoken of “the enduring power and appeal of the short story—they are snapshots of the human condition and of human nature, and when they work well, and work on us, we are given the rare chance to see in them more “than in real life.” The best stories in this collection provide this opportunity.

David Appleby is also the author of Moon Alley, a novel written in the form of connected short stories that was praised by Book View Ireland for its “pleasing symmetry in structure and convincingly drawn picture of a once thriving area.” He is the recipient of a PEW Fellowship and a graduate of Temple University. Find him at www.davidappleby.org.