Little is Left to Tell by Steven Hendricks 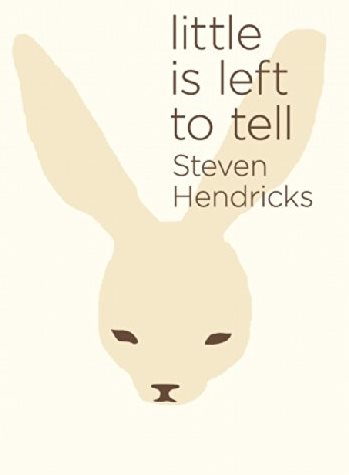 In the opening sentences of Steven Hendricks’s Little is Left to Tell, we are eased inside a tidy fairy tale. Mrs. Rabbit’s children are all “healthy and happy.” Their clothes and toys are all “arranged in their places.” Mother Rabbit is tending the garden and admiring her little ones through the window in the warm light of a summer evening. But we only get one paragraph to settle in to this bedtime story until we are jarred awake when the bombs fall.

The traditional fairy tale often follows the “Once upon a time” structure: a balance is introduced, upset, and then restored or resolved into a new balance. In Little is Left to Tell, our balance is barraged by the first line of the second paragraph. “When the bombs fell,” Hendricks writes, “mother ran for her children.” The reader is not eased into the narrative. There is no rousing character development or scene setting. It is here the reader is dropped into the mind of Mr. Fin, a man suffering from dementia, the closest we get to a protagonist. He restores his old boat, The Swan, and sorts through the wreckage of his memory and the stories he sifts out of the rubble to make sense of his grief:

He wanted to remember the stories, how he had told them the first time, the third time, the hundredth. He wandered, soaked in the dreary dream, to his study, where thoughts came so easily, and lowered himself into his wing, waiting…he could write it all down—but he gave up, for his unadjusted eyes left him submerged in a dark envelope.

Mr. Fin delves into the debris and pieces his stories together to make meaning out of his son David’s death. Like bubbles of gas rushing violently to the surface of a star, Fin’s memories shift and burst and disappear and morph into each other. Hendricks guides us through Fin’s nebulous recollections as he arranges these anecdotes into something he, and we, are left to make sense of. In this ever-shifting narrative landscape we find a cast of characters telling their own stories. “Hart Crane, the rabbit, the poet” tells us about bears that hatch from eggs and eat everything in sight. In turn, bears tell stories to little bunnies about how bears evolved from trees. Virginia the Wolf, an established author, tells stories to the bunnies around the dinner table. Fin tells stories about David that morph into stories within stories within stories.

Within these shifting recollections there is a seeming unease with “story.” Fin’s narratives expose memory as the fictions we produce in the interstitial space of consciousness to find meaning in things that don’t make sense, like our compulsion to create myths to explain the seemingly incomprehensible world around us. In the telling of a story or memory there is a near violence done to the events the story attempts to recount. It is this unease with story, this violence that “story” inadvertently commits, that is central to Hendricks’s novel.

We use stories to understand and make sense of reality, or to distort or reshape it. We tell children stories to lull them to sleep at night. Stories tell the truth. Stories lie. The stories that morph and travel through Little is Left to Tell fulfill all of these functions simultaneously while leaving what’s left up to the reader to sort through and piece together. Much like Barthes’ “writerly text,” Little is Left to Tell invites the reader to participate, alongside Mr. Fin, in the task of meaning-making.

With tips of the hat to everyone from Homer to Samuel Beckett to Virginia Woolf, Little is Left to Tell is a meditation on aging, the failure of memory, and the way we use stories to confront grief. In the end we are as lost inside Mr. Fin’s head as Mr. Fin himself, left to our own meaning-making devices. Little is Left to Tell is an ambitious, poetic experiment that longs to be read and reread, much like a memory is remembered and re-remembered until there is nothing left but a last line: “Now she was done wandering, and she opened the book.”

And what’s always left when there’s nothing left? Another story.

Steven Hendricks’s work has appeared in The Denver Quarterly, Web Conjunctions, Fold: The Reader, The Encyclopedia Project (Vol. 2), Sidebrow, and at XCP . He is a practicing bookbinder, book artist, and letterpress printer. He lives in Olympia, WA, with his wife and two children, and teachers writing, literature and book arts at Evergreen State. Little is Left to Tell is his first novel.