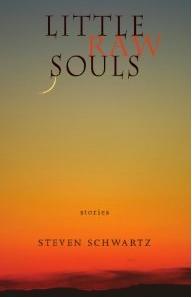 Steven Schwartz’s latest story collection is an aptly titled one. The souls occupying the pages of the eleven stories in Little Raw Souls feel a little uncooked, a little incomplete—but by no means should this be taken as a disparaging comment. The rawness implied in the title not only germinates in the imperfections of the characters but also through their staunch persistence; Schwartz is particularly adept at moving characters in strange and fascinating ways, and while their outcomes sometimes seem expected, the actions they take and the decision-making process that gets them there prove most satisfying.

A handful of the stories focus on the predicaments of an aging generation; characters are retired, becoming grandparents, and celebrating anniversaries, yet these same individuals are also seeking new relationships, venturing into unexpected romances, and attempting to rectify the damages of the past. Such subjects adhere to the collection’s overall thesis regarding rawness and a sense of incompleteness. Schwartz’s stories often capture characters in the midst of something monumental, and it’s to his credit that his stories navigate not only a spectrum of personalities but also of age and maturity, thus presenting a collection that is ultimately as rewarding as it is introspective.

The highlights of Little Raw Souls bookend the collection and both center on men facing the twilight of their lives. At sixty-eight, the narrator of the collection’s opening piece, “Bless Everybody,” has settled into a nice, post-divorce lifestyle that allows him to spend his retirement years tending to two-hundred acres of ranch land on the Wyoming-Colorado border. He maintains a healthy relationship with his ex, sharing custody of a golden retriever, and as the story begins, he’s telling her of the young couple he’s discovered living on his land. The girl appears to be well into a pregnancy, and because of the couple’s apparent impoverishment, he’s decided to allow them to live temporarily in the one-room cabin on the property. “Oh, Charlie, what have you gotten yourself into?” his ex opines, and his best response foreshadows how the rest of the story intends to unfold: “I’ll take my chances.” Charlie’s good intentions are immediately challenged when the young man shoots a mule deer out of season and in a restricted area. While deciding how best to handle the poaching incident, Charlie finds himself worrying for the young woman. He meets with her one night to express his worry about her safety and health, and she agrees to have him take her to a nearby hospital the following morning. Standing there, Charlie has a bit of insight into the experience between him and the young woman:

I had all these thoughts I shouldn’t have had, not the obvious ones that pertained to the wants of an older man in the presence of a young, comely woman and how she might save his flesh and soul and that he might be so delirious he wouldn’t know the difference between the two, but ideas about how the unexpected descended and snapped its fingers in your face and said, “Awake!”

When he arrives the next morning, he finds the couple outside, prepared to rob him of his money and his truck. It’s mostly the young man’s doing, but Charlie concedes and later, using the van the young couple leaves behind, he turns in the deer carcass to wildlife authorities, willing to accept whatever punishment he deserves: “I was all about rules and doing right by them and making the best of what time I had left on this merciful earth.” His mostly uneventful life upturned by the sudden threat of violence, Charlie comes to the sort of revelation frequent in Little Raw Souls: life seldom unfolds how we expect it to, and even when harm and uncertainty manifest themselves, the rightness of the world—particularly, the rightness of the character’s world —is still something to maintain some kind of faith in.

The last story of the collection, “The Theory of Everything,” acts as a spiritual compliment to “Bless Everybody.” The eighty-two-year-old narrator, along with his wife, has taken their grandchildren into their home due to their son’s inability to watch over the children. The children’s mother, beset by addiction, has abandoned the family, but as the story develops, she has returned in an attempt to restart her life. As part of this renaissance, the narrator’s son wishes to buy a coffee shop and would need the narrator to be a co-signer on the loan as well as put up his rental properties, his last remaining source of income beyond pension checks, as collateral. Rather than hand over the money that he’s sure will result in another failure for his son, the narrator chooses to approach the estranged wife, putting the money in her hand so that she will walk away and leave the family and the children for good. It’s a similar risk taken in “Bless Everybody”—placing one’s trust in the hands of what amounts to be a stranger—and before the narrator of “The Theory of Everything” knows whether his daughter-in-law will take the money, he chooses to leave the money in front of her and walk away, noting:

… I keep walking. I’m afraid to turn around, just like in the Bible because I’ve done a terrible thing that could turn me into a pillar of salt. But I don’t look behind me. I don’t look ahead. I just keep going.

The doggedness exhibited suggests a familiarity with life full of difficult decisions, and herein lies another for the narrator. His actions and thought process throughout remain compelling, and while his immediate problems would seem to be in the past, there’s still the promise of conflict lurking in the future between the narrator and his son, and that sort of uncertainty and the sense of things remaining incomplete colors every story in Little Raw Souls.

Elsewhere, Schwartz breaks from convention on few occasions, notably in “Indie,” a story of a high school teacher who puts a gun to his head at the front of the classroom. The story is told through the viewpoint of several students in class, and through the nine sections, readers gain a sense of the sort of terror and dread that enters into a classroom where tragedy is imminent. The countdown to the conclusion allows for a bit of elasticity in narrative point of view, but the ending tends to take on too much of a message rather than a satisfactory narrative conclusion. Better results are found in “Seeing Miles” and “Opposite Ends of the World”, more conventional stories that shed new light on topics such as sexual reassignment surgery and muscular dystrophy. In “Seeing Miles,” David, while on a business trip, meets up with a cousin he once found himself attracted to, only now, twenty-five years later, his cousin has changed from Mimi to Miles. The interaction between the two is interesting enough, but Schwartz makes the story special when David returns home to reconnect with his wife. In “Opposite Ends of the World,” Everett, at the onset of MS, must learn to deal with his growing disability as he and his wife consider the possibility of having children. Making matters worse, an unknown neighbor has filed a complaint about the noise of Everett’s dogs, and as the story plays out, Everett confronts not only his neighbor but his potential as a father and as an individual capable of living a satisfying life despite his mountain of physical limitations. In both stories, Schwartz concentrates on characters younger than the two protagonists in “Bless Everybody” and “The Theory of Everything,” but even with the shift in focus, Schwartz still manages to illuminate on the wondrous changes at work in the sometimes-chaotic lives of his characters. More often than not, the results are stimulating.

Schwartz’s fiction often follows conventional storytelling structures and styles, but with a collection like Little Raw Souls, conventionality and familiarity are welcomed traits. The work within is moving and deftly presented, and one hopes that Schwartz’s fiction continues to mature with the same sort of rawness and intensity exhibited by his latest batch of characters.

Steven Schwartz is the author of two story collections, To Leningrad in Winter and Lives of the Fathers, and two novels, Therapy and A Good Doctor’s Son. His writing has received the Nelson Algren Award, the Cohen Award, the Colorado Book Award for the Novel, two O. Henry Prize Story Awards, a National Endowment for the Arts Fellowship, and the Cleanth Brooks Prize in Nonfiction from The Southern Review. Married with two grown children, he teaches creative writing at Colorado State University and in the low-residency Warren Wilson MFA Program.