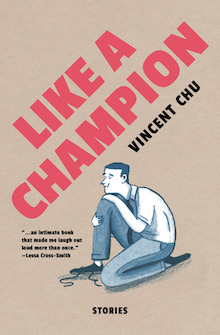 As children, many readers grow up on classic tales of thrilling adventures and triumphant heroes. By contrast, the stories in Like a Champion are all about defeat. Vincent Chu’s debut collection from 7.13 Books is a celebration of the loser for whom life is a constant struggle. But instead of pointing and laughing at these characters, Chu convinces us to root for them. Filled with neuroses and social catastrophes, Like a Champion focuses on the ironies of life and how our greatest failures collapse into the small victories that somehow keep us going.

Chu demonstrates an amazing level of range throughout the collection. “Recent Conversations” is written entirely through the back-and-forth flirtations of dating app messages. “The Tenderloin” is a particularly mysterious piece following Dean, a man searching for a possibly kidnapped woman whose phone he’s found on the ground. Along with following Dean, “The Tenderloin” vividly details the gritty, titular San Francisco neighborhood:

The smell of urine was almost unbearable but by the corner it passed, replaced by the smell of wet vegetables on the curb. The restaurants, hip ethnic ones included, had closed up shop and pulled shut their iron accordion gates and it was getting to about that time in the night when the population shifted and the faces changed and the passers-through became outnumbered by the all-nighters.

Much of Like a Champion addresses the monotony and social pitfalls of work life. In “Fred from Finance,” Fred constantly wonders why no one at his office remembers his birthday. Throughout his day at work and its disappointing aftermath, Fred analyzes the strange rhythms and personalities of his office, comparing himself to the loveable Glen:

People liked Glen and it showed. Last month on Glen’s Facebook page, seventy people wished him a happy birthday. Seventy! Fred didn’t know seventy people. Fred and Glen weren’t friends on Facebook but Glen kept his profile public. What a guy. Glen even got birthday wishes on his LinkedIn page. Offline, he also got balloons, cake from the VP, and of course, a happy hour. Fred didn’t go, but he heard things.

In many of Chu’s stories, the perspective is focused tightly on the protagonist’s brain. Any description or observation is received strictly through the main character’s eyes. While this can be a bit confining, the perspective does allow for lots of fun, neurotic moments in which the protagonist spins off theories of what’s going to happen or what those around her or him might be thinking. Everyday interactions are charged with possibility. In “Ambrosia” the narrator can’t stop feeling self-conscious about the dish he and his girlfriend Sam have brought to a barbeque:

I watch Sam glance at the ambrosia here and there throughout the barbecue, not saying a word, not even taking a spoon herself. She smiles at Priya’s eager jokes, picks at pieces of burnt chicken, but her mind is elsewhere. I stop eating the other food, even the meat, and focus on the ambrosia. How can this be salad. Who decided that any cold dish involving fruit or vegetables must be called salad.

As a consequence of this tight perspective, the writing of Like a Champion is heavily integrated into its character’s voices. Chu uses a wonderfully casual tone that complements his wallflower narrators. These lines from “Gory Special” capture the easy feeling of swapping stories with strangers in a bar:

After summer, I’ll go away to college and Marv will start driving for his dad’s bread company. Morning deliveries, weekend shifts, yeast. Poor bastard. He should’ve paid more attention in class, I always told him. Not giving a damn only gets you points in high school, not the real world.

To trigger their downward spirals, many of the characters in Like a Champion begin their stories with strong ideas of who they are or what they’re owed. These ideas are proven either completely wrong or they crack under the slightest pressure. In “Overseas Club,” Beatrice has moved to Germany in order to reinvent herself personally and socially. She immediately rubs her peers the wrong way and is socially supplanted by Bernie, the newer and more charming American teacher. As she works to win the favor of her colleagues in increasingly abrasive ways, Beatrice reassures herself that she’s better than Bernie:

Beatrice hadn’t felt such a strong sense of who she was since, well, maybe ever. Back home, she was just another girl from a lower-middle-class family. . . . She was a good person, she knew that much. . . . Just because you walked around smiling and being friendly to everyone, that didn’t make you a good person. What if you were rude and vulgar to everyone but had a heart of gold and made the right decisions in crunch time, when it truly mattered? Well, Beatrice decided, she would rather be that any day of the week.

Yet at the first opportunity Beatrice tells a needless lie to thwart her social rival. While she eventually tries to fix the damage she’s caused, Beatrice learns absolutely nothing from her time abroad. At the end of “Overseas Club” Beatrice is on a plane home imagining how she can hold her experience over others who have not had the opportunity to live in Europe. While there’s something humorous about characters remaining unchanged in the face of what should be monumental self-reflection, the repetition of this is a bit frustrating as the collection progresses.

The best stories in Like a Champion feature characters pulling off minor victories in the midst of enormous defeats. In the title story, Georgie’s comic book shop—called Like a Champion—is going out of business. Meanwhile, a number of burglaries have plagued small businesses around town, including Georgie’s. Georgie’s every attempt at improving his career, friendships, or romantic life results in a flop. But—in one of the best scenes in the book—Georgie unexpectedly succeeds in a small but very public way and is cheered on by the entire town. Despite his perpetual bad luck, “Like a Champion” ends on a note of hope and change for the future.

While its characters are plagued by letdowns and disappointments, Like a Champion is ultimately about seeing and living beyond failures. This keeps the collection from looking down on its protagonists’ shortcomings and instead leads readers to a place of empathy for each and every character. If you enjoy voice-driven stories that are funny and ironic without losing their heart, pick up Vincent Chu’s Like a Champion.

Vincent Chu was born and raised in the San Francisco Bay Area. His fiction has appeared in East Bay Review, Pithead Chapel, PANK Magazine, Cooper Street, Stockholm Review, WhiskeyPaper, and elsewhere. He has been nominated for the Sundress Publications Best of the Net as well as the Pushcart Prize. He can be found online at @herrchu.

Caleb Tankersley is the author of the chapbook Jesus Works the Night Shift. He has won the Wabash Prize in Fiction from Sycamore Review and the Big Sky/Small Prose contest from CutBank. More of his stories can be found in Permafrost, Psychopomp, Pacifica Literary Review, Big Muddy, and other magazines. He is the Full Length Editor for Split Lip Press.