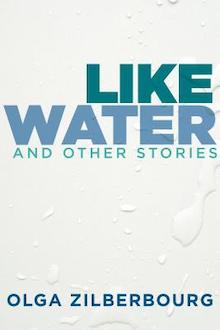 For many Americans, the fall of the Soviet Union in December of 1991 has faded into history. It is of the past, removed, something that makes for good television. At most, it is an event of international importance, something that happened “over there.” This is less true for Americans who were born in the USSR such as author Olga Zilberbourg, whose first book of English-language short stories, Like Water and Other Stories, was released last fall. For Zilberbourg, 1992, the year after the fall, is a milestone year around which many of her stories revolve. It acts as an invisible undercurrent weaving through the collection.

Zilberbourg’s writing walks a crooked line between the familiar and the alien. She writes about typical American preoccupations with family, how to raise children, how children come to dominate a parent’s life, especially the life of a mother. But stories of these American social touchstones come slightly tinted with the difference of someone who began life somewhere else, whose family has known a different kind of life.

There is irony in drawing this distinction since the vast majority of people who claim the identity of “American” started out somewhere else. We are, after all, a country of immigrants. In this sense, the familiar and alien is a distinction of culture not nationality. What Zilberbourg does, and does well, is elevate Russian culture and experience into the realm of American literature.

She does so in unconventional ways. This 172-page story collection contains 52 stories, including one, “-B,” that is only a sentence long. Many are two or three pages. Some are fleshed-out with vivid, “lived-in” or “round” characters as one is taught to write in American college fiction seminars. Others are ruminations, sketches of scenes, fragments of observations. By American literary conventions then, this work is highly unusual if not experimental.

The theme that binds this collection together, no matter if the narrator is young or old, professional, student, homemaker or child, is their experience between cultures. Each narrator has some link to the former USSR either through their childhood experiences or older family members. This link is something they carry with them. It informs how they see the world and creates a feeling of displacement, and sometimes alienation, as they consider the ways the two parts of their lives fit together.

In the title story, Zilberbourg’s first person narrator identifies herself as an adjunct instructor teaching Russian Literature and Culture. She writes,

Which is to say, even though I left the Soviet Union almost thirty years ago, my heritage still takes up the greater part of who I am. When asked, where are you from? I invariably answer, Leningrad (159).

She is inextricably tied to a place that now exists only in dreams. A place that changed dramatically in 1992 when the narrator was in her early teens.

The narrators of these stories are not identified. They are not necessarily the same person, but the events of stories often overlap to give a sense of continuity and understanding that, even if the narrator changes from story to story, their lives are closely linked and their experiences echo those of the narrator in “Like Water,” tracing a lineage of change back to 1992.

In “Rubicon,” which tells the story of a narrator encountering a man she knew as a child in Russia in the school pick up lane, and “Her Turn” — about going on a date with another Russian childhood friend as adult Californians — Zilberbourg explores the connection to this particular timeframe. In both stories, her narrators are children of the 90’s, but not the 90’s of American culture, rather of the USSR right before and after its fall. As adults, these narrators test out their old relationships and measure what has changed, what they have absorbed from their new country compared to these boys they knew who have become men.

These stories are less about being an outsider than being part of a world defined by globalism. Where previous generations might share surprise encounters with childhood friends in new cities or states, it no longer seems strange that one might cross oceans and still encounter people we know. The boundaries between states are not what they used to be. There is a fluidity of cultural exchange and integration that weaves through several stories.

This geographic fluidity also marks Zilberbourg’s characters as members of their generation. Her narrators often observe and interact with people who are older than themselves These people are removed from the younger generation’s experiences by a lack of fluidity between cultures. They may also be Americans but their experiences “over there” took up more of their lives. In “Doctor Sveta,” “Cream and Sugar,” and “My Mother at the Shooting Range,” these older people act as repositories of information on that other world for younger narrators trying to understand where they’ve come from, perhaps to fill in the gaps of what life was like before that pivotal year of 1992.

Zilberbourg’s narrators are separate from the older women who populate their lives. Their identities are presented as wholly one thing, defined by that world that, whereas the narrators have had the chance to be more than one thing. They are constantly trying to find their way through variances of culture that blends rather than culture that is static. In the penultimate story, a narrator describes one of those scenes tied so closely to 1992. She has gone to see “Eugene Onegin” on a school field trip. The scenery falls in the middle of the performance and what could’ve been catastrophe turns into something humorous:

And yet even as a fifteen-year-old I knew that the joy my friends and I shared was the other side of terror, born of the spectacle of degradation and loss. A star bursts, an empire falls, a ball of fire streaks across the sky. For us, its witnesses, this could be a once-in-a lifetime event. This could also be the start of the blaze that would consume our lives. The year was 1990. The future, impossible to tell (160).

This scene encapsulates everything that Like Water and Other Stories is trying to understand. The experience of being Russian at that particular time has made Zilberbourg and others of her generation into particular kinds of Americans, living out the legacy of a fallen empire in the midst of another. They are witnesses not just to stories of post-collapse immigration, and to the stories of their parents and grandparents, but also to their particularly blended, globalized lives. Zilberbourg’s often ethereal narrative voices, and her choice to represent these stories as brief fractures of narrative, gives readers a sense of the kind of work that goes into blending living reality with the fuzzy edges of past memory, trying to link together the pieces of what is known to understand what is unknown.

Olga Zilberbourg is the author of three Russian-language story collections, the most recent of which was published in Moscow in 2016. Her English- language fiction and criticism have appeared in Alaska Quarterly Review, Narrative Magazine, the San Francisco Chronicle, The Common, and Electric Literature. Born in Leningrad, USSR, she came of age during the country’s disintegration, when the fall of the Iron Curtain created unprecedented travel and educational opportunities. Among the first in a wave of post-Soviet youth to study abroad and in the United States, Zilberbourg attended the Rochester Institute of Technology, the Goethe Institute in Germany, and the San Francisco State University, where she earned an M.A. in Comparative Literature. She has worked as an associate editor at Narrative Magazine and currently lives in San Francisco with her husband and two children.

Jaye Viner is a writer and teacher of writing. Her first novel is forthcoming from Red Hen Press. She posts about writing, reading, music, sports, and her cat @JayeViner
Share This