Light Without Heat by Matthew Kirkpatrick 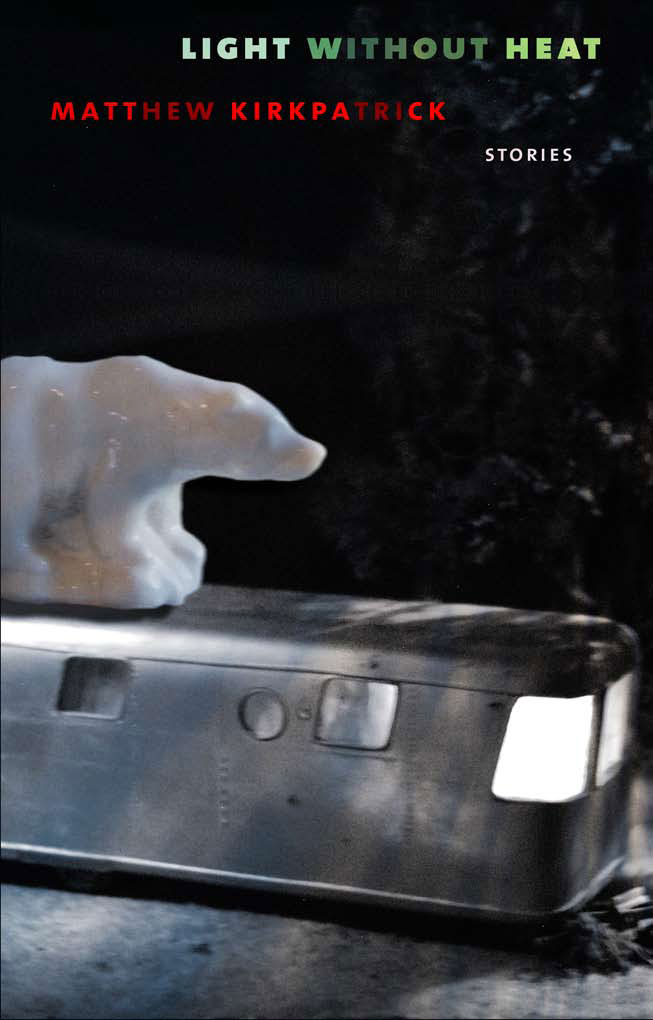 FC2 at the University of Alabama Press, 2012

Matthew Kirkpatrick’s debut, Light without Heat, is a diverse and exciting collection of fiction. Formally engaged and innovative, the pieces employ erasure, collage, illustration, false glossaries, false histories, actual histories, and photographs. Yet, the works are held together by a consistent focus on humanity, on emotion, on striking images and poetic prose. Here the innovations are not simply out of indulgence or idle experimentation, but in the pursuit of arriving at the strongest method of portraying a particular character, emotion, or story, and in the process of comprehending our common humanity.

In “Pineal Gland,” Kirkpatrick portrays character through an illustration of a brain, labeled with different aspects of personality and memory. This form seems like an exercise in the diminishment of the author’s authority in favor of the reader. For the reader is compelled to find an order in these notations, to understand if the “obsession with Styx” arrived prior to the “obsession with competitive cooking programs.” And where to place those darker obsessions of “arson,” and those obsessions acted upon, “damaged in fire”? Indeed, in prizing no one moment or interest above another, Kirkpatrick seems to further comment on the artificial representation of character within a traditional narrative, the development of a personality through conflict and epiphany, in favor of a total vision, where each of us are made up equally of our interests and hobbies as well as our obsessions, our misdeeds.

A later piece, “Pastoral,” is built from the repetitions of phrases and paragraphs, before shifting into the willful obliteration of these repetitions, erasing images, phrases, contexts. For instance, the reoccurring paragraph:

A raptor huddles in its cage hoisted high above and eats its own long frozen eggs cracking each shell with beak tip, sucking the thick, cold yoke. One it swallows whole and one rolls from the nest and falls through the cage wires and falls through trees and wires, falling, shattering on the hard ground. Each day the raptor lays new eggs and eats them.

is born anew, poetic and mysterious, through erasure into:

The effect, which is used throughout the collection, is impressive. In pushing the possibilities of narrative, Kirkpatrick returns fiction to something almost before “the word”: to sound, to image, to the contrast of white space and the black of ink, dissolving his writing until it becomes a beauty beyond sense, beyond story.

While not as obviously engaged with formal innovation as many of the other works, the exceptional “Throw Him in the Water” is also engaged with ideas of what happens when familiar elements are removed. In a mostly straightforward narrative we learn about a man who is Mayor of a town that is no longer a town, a place abandoned by many of its inhabitants for the coal fires raging beneath the earth. This strange sad world emerges as do many of the other pieces: through the emphasis Kirkpatrick places on his prose, on detailing the “smoke [rising] out of fissures in the playground. The heat burning their feet through the bottom of their shoes” and the “house across the street… ablaze, fire jumping out of the broken windows…. the walls blue and orange with the heat.” It is a world dealt into another century, cut off from civilization, forced to grow and raise and kill their food. We learn of the deluded men who swell with self importance and the wives who long to be freed of their husbands:

The other dead chickens in the coop screech like they know what’s happening and she starts to walk back up the hill with the bloody ax in one hand and headless chicken in the other on the way to see her husband in the pool. She stops and considers what she might do with the ax and how, without the Mayor, things would be simpler. There are no police here, no neighbors. She could do it, gather the children, and walk right out of town and nobody would ever know. He’d float face down dead in the pool water and they’d be free.

It is the story of what ultimately motivates the human spirit, the selfishness and the fear, the ambition and ego, the tenuous hold on morality, love, and family, in a world after our society, our culture, has been slowly reduced to nothing.

The final work of the collection, “Some Kirkpatricks,” similarly investigates our commonality in the face of approaching nothingness. A tour de force of diseases, historical outbreaks, plagues, epidemics, and other such mass deaths, statistics, photographs, and narratives, “Some Kirkpatricks” fuses most early formal elements in an exhilarating punctuation. Here are truncated narratives of various people named Kirkpatrick through the ages, photos of their tombstones, listings of their birth dates and death dates, the ways they lived, the ways they died, until the repetition becomes numbing, or, as we are finally told, “Kirkpatrick dies. Kirkpatrick is born. Kirkpatrick dies.” The effect of all of these Kirkpatricks, born and dead and gone to dust, is each of them comes to feel as anonymous and unknowable as the thousands of dead the piece elsewhere associates with various outbreaks and disasters. “Kirkpatrick could not remember being born,” we are told, “and will not remember dying, the last deep breath, the last short shrill inhalation, unsatisfied, wanting just one more, the lack of light or darkness.” No matter how one moves around in life, the conclusion is ultimate and it is inevitable for all our contingences and plans otherwise, and someday soon that which we are survived by will similarly cease, and finally, each will become “a name in stone eroding and bone.”

Light without Heat is, at once, a collection that is relentlessly engaged with the possibilities of form and language, while also deeply invested in matters of universal importance: of love, of purpose, of life, of death. As such, even those readers who are not typically interested in innovative and experimental fiction will likely find much of interest in Mr. Kirkpatrick’s marvelous debut.

Matthew Kirkpatrick’s writing has appeared in many literary journals, including Conjunctions, Western Humanities Review, DIAGRAM, and the Notre Dame Review, and is forthcoming in Unsaid. He recently finished his Ph.D. at the University of Utah. He lives in Salt Lake City, UT with the writer, Susan McCarty. Together, they maintain a small menagerie.

Robert Kloss is the author of How the Days of Love & Diphtheria (MLP NEPHEW, 2011) and The Alligators of Abraham (MLP, 2012). He can be found online at rkbirdsofprey.blogspot.com.