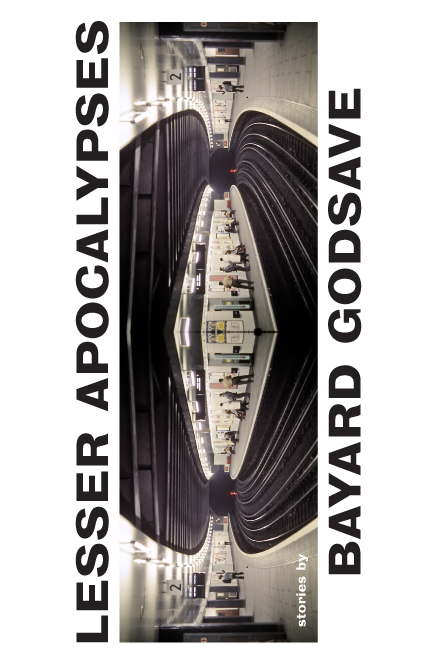 Bayard Godsave’s Lesser Apocalypses traces the half-lives of disaster—dissipating but never disappearing. This kaleidoscopic collection challenges the idea of catastrophe as an isolated incident, a dot on a timeline. Rather, disaster lays low in the crannies of people’s porous lives, resurfacing every time the sponge is squeezed. Drawing on an older definition of apocalypse, these stories are revelations of things hidden. The collection’s title reframes the dominant yet misconstrued idea of apocalypse as an absolute end. Defined by both quality and multiplicity, Godsave’s Lesser Apocalypses are endings whose afterglow quietly haunts the rest of the world that continues.

In the wake of a harrowing stay inside a missile silo, a former soldier sinks into the comfort of familiar habits, “predictable trajectories”. The echo of trauma is as subtle as the removal of spontaneity in an otherwise typically humdrum life. Cast from the perspective of the soldier’s second wife, Godsave’s opening story inhabits the murky distress of second-hand trauma, trauma once-removed. Alienated from the event and witness only to its effect, the narrator is unable to exit the claustrophobic confines of empathy—if empathy is even possible.

Meanwhile, in the second story, a couple confronts the slow crumble of their family through the smaller, satellite-battles surrounding their war-obsessed seven-year-old son. Spewing encyclopedic knowledge, Noah declares “A neutron bomb actually has a relatively low megaton yield, but emits high levels of radiation, so it can kill soldiers and stuff inside fortified positions.” Discussions of bombs and fatal radiation are both safely removed from the everyday reality at hand, and intimately analogous to the deterioration of that reality. Addressing his supposedly fortified position inside a nuclear family with the vocabulary of nuclear warfare, Noah implies its vulnerability—its permeability—and the stealth of calamitous radiation. The muted disaster of his family’s wane comes to light through Noah’s fascination with survival gear. A gas-mask monopolizes his birthday wish-list. Waist-deep in a McDonald’s ball crawl, entering his eighth year, Noah wonders whether it may be better to remain unaware of disaster’s approach, whether he should soften his vigilance. “Maybe it was better. Not knowing. But somehow it felt worse.”

Perhaps a lesson from the subsequent story has wafted backward to Noah, demonstrating that injury comes in the getaway, in the flight from disaster, not disaster itself. Working at the cusp of juvenile antics and calculated vigilante heroism, Victor now walks with crutches. “It wasn’t the explosion itself, or the shock wave that followed—admittedly a small one—but the getaway.” The romance of Victor’s mythology—welded by the complicated awe of his family, his admirers, his reporter, even his creator—is a tip-off that, despite the dexterity of Godsave’s prose, he is young. Nostalgic depictions of the narrator’s college writing course in which “overconstructed” and “workshop-malicious” comments shot like pin-balls herald this story’s reflexivity. We get a two-layer depiction of the protagonist—one written by a reporter for the public audience, the other tapping the private consciousness of his woeful sister.

The reporter-narrator’s negotiation of truth and “writing [as] an act of betrayal” seems pertinent to Godsave, an otherwise self-assured rookie. Certain rhetorical devices—“He trusted me because I was another person, and you should be able to trust other people. Right?“—In conjunction with sporadic footnotes embolden the self-consciousness that runs through the story. The narrator knows he is being read. Though consistent and coherent, these rhetorical speed-bumps can disturb the tempo of the prose. Perhaps this is the point—to make the reader as conscious of his readership as the writer is conscious of his writership. The reporter recounts a moment of paralysis in which he watches Victor’s niece maul a strange in a diner. His inability to move from spectator to actor becomes a pattern. He is equally passive about Victor’s foreboding briefcase, whose eventual combustion was rumored to have been visible from space, “a tiny flash beneath the clouds, like the wink of copper in a murky pool, and then the ripple.”

In the wake of disaster—the wake of apocalypse—there is always a ripple. Like radiation trapped in the eternity of half-lives, an ending is not the end of itself. Rather, it scatters and settles like dust on what remains. Victor’s sister imagines within the explosion “a shadow, Victor, wavering there for a second or two then disappearing altogether—No, not disappearing: dissipating, disseminating, spreading outward, growing into something else.”

Victor’s explosion passes the baton to a post-apocalyptic Paris—“The City of Lights” turned “The City of the Faint Glow”—from which the next story hails. Radiation waves from neutron bombs passed “through the walls of houses, and no less indifferently through the families inside.” But the city itself remained “standing, empty, like a museum at night, as though it had never been touched. Abandoned, unlivable, and draped in fallout.” A “middle-aged” fifteen year old is habituated to the aftermath of a disaster she never lived through. Fallout hovers like clouds, and red tracer bullets accent the skyline. These things are a commonplace. Like the adaptive quality that tames foul scents after extended time in their company, the inhabitants of the faint glow forgot that the lights had ever dimmed. What seems for most of the story to be a fatal complacency is reframed by the end as the positive capacity to calibrate oneself to even the most despicable baselines. Curled in a fetal position, dodging the airborne bricks and bottles of fire in the heat of an attack, the pregnant narrator reflects,

A description of cheap possessions in the moonlight may just as well describe the collection of stories in which it is found. Godsave’s stories “glow around the edges, seem to tremble and vibrate with a certain potential, like ripples appearing on water, sounding the presence of something beneath the surface.” Revelations of things hidden. These stories are haunting, unsettling and yet distinctly enjoyable. The best writing appears in a fractured narrative, scattered through the collection like grass between sidewalks. Its sense is more elusive, its omissions more suggestive.

Perhaps the only comfort to be drawn from absolute apocalypse is the knowledge that it will not be remembered. It has no wake, no aftermath, no legacy. These apocalypses may be “lesser” in that they are only a partial ending, one thread clipped within a larger fabric still intact. But maybe that makes them greater. These are the apocalypses of the everyday, the multiplicity of endings that punctuate the continuity of our lives. Perhaps this is their comfort. As Noah watches a fire devour a local bowling alley, his mother dampens the violence of the spectacle by affirming that “These things happen.”

Bayard Godsave is an Assistant Professor in the Department of English & Foreign Languages at Cameron University, where he teaches literature and creative writing. His fiction has appeared in, among other places, the Cream City Review, Pleiades, and the Gettysburg Review. He lives and works in southwestern Oklahoma.

Wendy Lotterman is a recent graduate of Bard College. Her writing and translations have appeared in Chronogram, Sui Generis, Documents Paradoxaux and Bard Papers. After graduating, Wendy pursued a brief stint as a farmhand in the Hudson Valley before heading southward to the outskirts of New York where she currently resides.