Land of Love and Drowning by Tiphanie Yanique 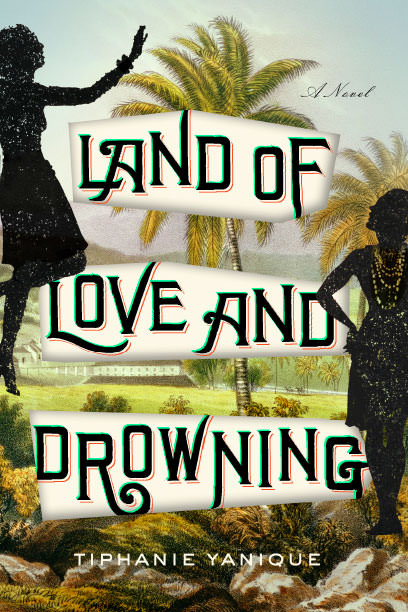 “Family will always kill you – some bit by bit, others all at once. It is the love that does it.”

“History could do that, change a person’s name. History was something so simple and insistent that none of us has escaped it.”

Tiphanie Yanique’s novel Land of Love and Drowning intertwines these two themes—the danger found in familial love and the inescapability of history. It is the story of the Bradshaw family, particularly of the sisters Eeona and Anette as they grow up and try to find their place in the world, and also the story of the Virgin Islands as it gets transferred from Danish to American rule and finds its relationship to the rest of the world changing. The family saga is complex, involving love and hatred, marriage and divorce, beloved children and unwanted pregnancies. Incest is a central theme, as we discover early on that Eeona and her father have had a sexual relationship and learn later that another possible incestuous relationship threatens. Love continually threatens to drown the characters, sometimes literally, often figuratively. Examples of long-lasting love are rare and seem to offer boredom more than sanctuary. Instead, love is a force that endangers and disrupts.

The same is true for history. The Bradshaw family history is shaped by events that sometimes seem far from their shores: U.S. prohibition brings an end to the lucrative business of shipping rum, World War II forces several of the central characters to join the military, and new forms of tourism transform the landscape and economy of the islands. The characters try to shape their own lives, Eeona attempting to move on from her relationship with her father and Anette determined to love whom she wants to despite her sister’s warnings. They are searching for the right balance between belonging to family and community and finding independence and self-determination, but their efforts to decide their own fate are thwarted by what they cannot control. Inheritance is one of those things, and it operates on many levels: genetic, cultural, mythological, financial. Eeona and Anette struggle to live their lives against a backdrop of family and history so sharply defined that their efforts to escape sometimes become desperate. In a nice use of irony, Yanique makes Anette a history teacher, but she doesn’t teach Virgin Islands history because it’s not part of the established curriculum. And yet that history is certainly there, whether recognized by the history books or not.

For the most part, the novel moves forward chronologically, beginning in 1917 on Transfer Day and moving through much of the twentieth century, but the narrator occasionally jumps ahead to tell us what will happen in the future, sometimes in vague, hinting terms, but often in specific detail. Although there are twists and turns of plot that keep the reader moving through the narrative, Yanique’s emphasis is not so much on unspooling the story in an orderly, traditional way, but on digging deep into the characters’ world. Part of that world is the myths the Bradshaw family grew up with, myths that come from Anegada, the island where Eeona and Anette’s mother was born. In particular, there is the myth of the Duene, human-like creatures who protect the wilderness. Their feet face backwards, so they can’t be easily followed:

This story haunts the novel, providing a metaphor for understanding the wildness within the characters and the untamable dark side of humanity. It also prepares us for the magical elements of the story, for this is not an entirely realistic novel. These magical elements and the occasional recital of future events give the novel its own mythological feel, as though Yanique is creating a new mythology or extending the old mythology in new directions.

The new stories Yanique wants to tell are narrated by many characters and by various voices. The novel opens in what appears to be a conventional third person limited omniscient point of view, but quickly shifts into omniscient, as the narrator looks into the future, and from there shifts into first person plural:

The story will become more real than the night itself because the story of it will last, while this wet night will soon be over. And here we are putting it down, so that it may last forever.

The “we” here is never defined, but it appears regularly, as though the Virgin Islanders as a whole were telling the story, or perhaps the Bradshaws, or the Anegadians, or even the islands themselves. Significantly, this first use of “we” is a reference to the writing of the story; it is communal myth-making at work. But the unidentified “we” is only part of the mix. There are also sections narrated in the first person by Eeona, Anette, and other characters, each in their own distinct voices, and, in the case of Anette, in dialect. The method gives depth to the world Yanique evokes, letting us see it from different time periods and perspectives, from characters of different races and ethnicities, and from characters with different experiences and motivations.

Land of Love and Drowning is a follow-up to Yanique’s 2010 short story collection How to Escape from a Leper Colony, which also told stories about the Virgin Islands, among other places, and also offered an impressive range of perspectives and voices. Both books demonstrate Yanique’s beautiful way with language and her interest in combining realistic stories with touches of magical realism. Focusing on one particular family as the novel does, though, allows Yanique to dig deeper into her theme of how historical and geographical settings, as well as family, combine to shape her characters. The novel shows that while family may kill us in the end and while history is inescapable, as the above quotations claim, the fight against them or alongside them makes us who we are.

Tiphanie Yanique is the author of the short story collection, How to Escape from a Leper Colony, (Graywolf Press, 2010) and the picture book I Am the Virgin Islands, (Little Bell Caribbean, 2012). Her writing has been published in Best African American Fiction, The Wall Street Journal, American Short Fiction and other places. Yanique is also the recipient of a Fulbright scholarship. Yanique is now an assistant professor in the MFA and Riggio Honors programs at the New School in New York City.

Rebecca Hussey is a Professor of English at Norwalk Community College. She blogs about books at Of Books and Bikes .
Share This