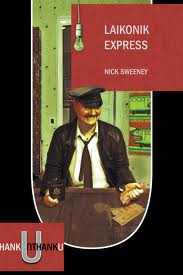 Nick Sweeney’s novel Laikonik Express is named after a long-distance train that runs between Krakow and Gdynia in Poland but we do not meet this “central character” until the narrator, Nolan Kennedy, has already travelled from Istanbul, where he lives, to Warsaw.

Kennedy has found an abandoned typescript by his friend Don Darius when the latter left his flat to move to Warsaw. Convinced that this is a major literary work, Kennedy is on his way to see Don, as the novel opens, to persuade him of the novel’s worth. Don has another priority, however: to trace a woman he met on a train. And so the pair set out: “Around six next morning, Kennedy was not entirely surprised to find himself and Don mooching around Warsaw Central station before boarding the Laikonik express for Gdynia.” (123)

This is the first mention of the name of the train. The title provides the context for the key event that took place there: the meeting between Don Darius and Aleksandra Bruzhevska (Ola) but also – more importantly – the experience of travelling with its views, glimpses and snippets of other lives, its chance encounters and overheard conversations, risks and opportunities. For that is what this book is about: Kennedy and Darius are travellers, observers, story-tellers, “people overseas”, who recount what they see and hear but do not necessarily go below the surface to understand more.

Laikonic Express is set in Poland in 1992. Nick Sweeney, who lived there from 1992 to 1996, says he wrote it hoping to capture the atmosphere of both changing times and the special climate of “silence in the snow” of winter.

The cold and snow are ever-present, since the characters have to struggle through them and the reader certainly feels the cold and damp. There are walks: around Warsaw, in Gdynia and Abel (a resort on the Black Sea) but much of the action takes place indoors: in bars especially (for warmth as well as refreshment), in flats, at stations and on trains, even in cars.

We get to know the main characters very well indeed. Kennedy, the narrator, is American, a teacher of English as a foreign language (EFL) in Istanbul. Don Darius is also an American EFL teacher, now in Warsaw, previously in Istanbul and before that in Saudi Arabia. Don describes them both as “lonesome world-weary loafers … overseas and out of place” (54). Jacek (who is called Jack) is a Polish teacher of English and PhD student of linguistics who rescues Kennedy and Don when they arrive in Abel. Krystyna is Jack’s mother, a former scientist who once worked in the USA, now seriously ill with cancer. Ola, the object of Don’s search, we only see briefly but do not meet; she remains pale. Ling (Kennedy’s Chinese girlfriend) and Kennedy’s dead father (a “beat”) we get to know well, through Kennedy’s reflections during the downtime of travel.

Other characters, often barely seen or heard, are vivid. Here are the first travelling companions we meet, grouped into the narrator’s compartment, and described in a style that represents the novel as a whole – humorous, good-tempered:

Around him were three Turkish men whose tongues worked loose from drinking raki to spout schoolboy stuff about women they would never have. They revealed the harems they kept in their heads, and Kennedy wanted to remind them: the only regular joes ever got to see the harem women were the eunuchs, you cuntstruck suckers. Who else was there? Kindly bearers of apples, two Iranian brothers in extra-extra-large. They gave Kennedy hell in good temper for being an American, fighter of unfair desert wars and non-believer in the only faith. Turks, in Kennedy’s experience, never gave a damn about that, and the harem keepers looked on in polite amusement. Last, and least, there was a Bulgarian woman so small she had surely passed herself off as hand-luggage. (7)

Kennedy has ostensibly left Istanbul to find Don after discovering his typescript: “Then it kind of turned into one of those mysteries that gets you out of your armchair and onto trains, investigating.” (29)

Is this an expression of friendship, one of the novel’s themes? On the surface perhaps, but Kennedy realises that he has other motivation (30). This was also a trial separation from Ling, whom her father would soon send back to China – separating them forever. The postcard he sends to Ling shows a romantic trait – as far from his everyday language as would be the style and vocabulary of the English he taught (another theme):

Ling I miss you and need you and wish you were here with me right now as I sit here czeching out Ostrava, January ninety two, Year of the Friend Indeed. Think of me and I’ll think of you and our thoughts will surely fly the continent and hook up. (31)

Kennedy is an aspiring writer too. His identification with Don and the typescript, which he promises to promote, shows how much he would like to produce something equally good … and publishable.

He had a few stories seeing the light of day in various little magazines that, he was sure, only other wannabe story-writers read. He had a novella out, the tale of a gravedigger who fell in love with a mourner who turned up at the wrong funeral, under the imprint of an eclectic publishing house in Manhattan. He had two abandoned novels in a drawer in his Istanbul apartment, had several more – three, at least – gone on the wind in various parts of the States; there were a hundred more in the wilds of his mind. (15-16)

Because you could not tell people that all you really ever wanted to do was write, and edit, and publish – you just could not tell them that. Unless you were already a fuck-off big writer, people just went into sneering overdrive. (105)

Don once, under pressure, describes what it is to write:

“Just get the urge one day, write down the thoughts going through my head, change them around a little… Not a natural urge, I guess. I mean…Well, take a look at Barnacle Bill out there.” He pointed to the fisherman. “Sits and reels in his fish. He has thoughts going through his head, right? But he doesn’t feel the need to come and spill them out so other people can know them.”

“Maybe he does.” Kennedy thought Don was being unfair to all the little people who got exactly that same urge one day, just like Don himself, and wound up writing books. (235-6)

Words and writing and symbols often feature in the text, whether in the Chinese characters Kennedy practices or, strikingly, as a path in the snow: “Kennedy’s thoughts careered in and out, fonts changing, going big and small and plain and fancy, and he let them write themselves onto the snow so that he could follow the trail of them back to the hotel.” (36)

The conversations particularly between Kennedy and Darius sound authentic: colloquial, sometimes foul-mouthed, with nicknames, plays on words, shared references to literature, films, music; their banter (often drink or drug induced) carries the “story” along with little effort on the reader’s part – except not to miss (easily done) the occasional pearl. Kennedy’s reflections are stream of consciousness, frequently very funny and occasionally poetic.

On the surface, much is flippant and light-hearted in Laikonik Express, nothing violent or nasty – except for Krystyna’s illness. Some scenes are pure slapstick, such as the encounter with a ticket inspector (43). Many jokes revolve around misunderstandings of English. For example, a scene with a fellow passenger who announces – to two teachers of English as a foreign language – that he has not understand a word of their English (276-8)! Or the priceless:

“Hey, Jack.” As the credits rolled, Don distracted himself with a new preoccupation. “That little bastard called the munchies is beginning to gnaw away at my body and soul a little. You know what I mean?”

So what is it all about? Kennedy has come full circle still “lost in words” (1) but the action of travel (as opposed to writing) has had a positive effect on his love for Ling and they now live together in China. The difficult question of being “people overseas” (32, 271, 295) has been temporarily resolved. Don has achieved the success of which Kennedy was the harbinger. Kennedy has written the story behind the story, as Krystyna made him promise to do …

It is a brave narration that includes so much detail, filling the novel of 296 pages. There is a risk that a reader could take exception to the tone (too brash, too clever?) and look for more structure, more depth in the topics raised (the new Poland, for example). However, Laikonik Express is an example of the journey being more important than the destination, the travelling of more value than the getting there – even with a happy ending.

Nick Sweeney’s short stories have been published regularly in Ambit and other magazines. Laikonik Express is his first novel. His short story “The Pitch” is in the Jan 2012 Ambit 207. Much of his work reflects his fascination with Eastern Europe and its people and history. His other obsessions are Balkan music, bike racing, Italian Futurism and walking for the hell of it, all of which make their way into his work from time-to-time. He lives in London, works as a freelance writer, and plays guitar with Balkan troubadours in the Trans-Siberian March Band.