Kinship of Clover by Ellen Meeropol 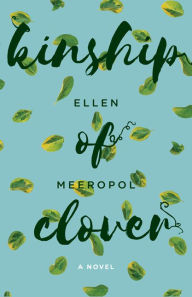 Ellen Meeropol writes novels in the tradition of such authors as Barbara Kingsolver, Rosellen Brown, and Paule Marshall. Whether termed radical, political, or socially engaged, hers is fiction that addresses the impact of culture and politics on human relationships.

Meeropol attacks issues head-on but with subtlety, posing complex ethical dilemmas in prose both literary and accessible. Her debut, House Arrest, about a home-care nurse and a pregnant cult member, asks, “Is it ever permissible to break the law for a greater good?” Her gripping second novel, On Hurricane Island, is focused on torture and the practice of extraordinary rendition and asks, “How should a society weigh individual freedom against the threat of terrorism?” But her newest novel, Kinship of Clover, is a stylistic departure. The theme of climate change and species extinction is handled in a more mysterious, even mystical way.

Kinship of Clover doesn’t pose a single question, and its various storylines weave in and about each other like vines. The novel opens with Jeremy, a sensitive, biracial young botany major obsessed with the extinction of plant species, experiencing hallucinations triggered by the release from prison of his father (a member of the cult in House Arrest). Jeremy seeks help from campus Health Services and then stays with his twin brother Tim, a business school major, and gets involved briefly with an eco-terrorist group. The second major story line involves Flo, an aging activist confronting Alzheimer’s; her granddaughter Zoe, a spirited young woman confined to a wheelchair; and Zoe’s father Sam, divorced and struggling to take care of both daughter and mother. Complications arise from how each navigates Flo’s condition. The narratives intersect because Zoe and Jeremy’s parents were in the same cult, and although the families are no longer close, the young people meet at a birthday party and fall in love.

Meeropol focuses on lives lived on the edges of the mainstream: unmarried parents, lesbian couples, feminists, lefties. This fluid notion of family that runs throughout all her novels is, in Kinship, mirrored symbolically by a litany of plant species and the families to which they belong, underscoring the theme of interconnection. Her characters are richly drawn, with so much heart and individuality that each is utterly unique and convincing.

Meeropol’s technical prowess is evident in how expertly she juggles five point-of-view characters and their distinct voices, how she artfully handles back story (primarily Flo’s relationship with a black man and why she left the Communist Party), and keeps up the momentum despite a leisurely pace. While there are important things at stake—will Sam learn who his real father is; will Jeremy’s twin brother Tim “out” him for his connection to a radical group; will Flo move into Assisted Care; and, most compelling, will Jeremy be committed to a Psych ward?—Meeropol doesn’t heighten the tension. For example, there is an Earth Day act of eco-terrorism, but the novel only mildly raises the issue of how far activists should go to save the planet, and Jeremy never seriously considers violence as a tactic. Even though he falls under suspicion by the FBI, that threat is resolved quickly, and the FBI simply disappears from the novel.

So what makes the novel so compelling and satisfying?

Meeropol’s stunning achievement is the interiority of the two most affecting characters in the novel, Flo and Jeremy. Flo’s mind is deteriorating, and we travel that journey in language that changes with the disease’s progression:

Locks required keys. Locks and keys and combinations and numbers meandered around in her brain, circling and spiraling and refusing to line up right. … She could hear the phone ringing on the other side of the door. Probably Sam, checking up on her.

She looked down at her clothes, rumpled and sooty and where was her pocketbook and her pills and what about all her books and her photo albums and her favorite jacket Anna made from pieces of Sam’s outgrown blue jeans that Flo had saved for years and lined with red satin, and how badly was her apartment burned anyway?

Sometimes when she tried to concentrate … the words slid away and were replaced by buzzing. It started in her ears like a thousand bees and it moved into her brain and it got so loud she couldn’t think. The sound grew enormous, vibrant and electric and insistent…

Finally language leaves Flo altogether, and we never return to her point of view.

Throughout the book, Jeremy pays homage to extinct plants by intoning their names. Meeropol uses the incantations as an elegy for species that are slipping from our collective memory, paralleling Flo’s loss of individual memories.

Green vines circled his arms and slid under his shirt and skimmed along his back. Soft stems tickled his neck with their delicate suckers.

By the end of the novel, the warmth and acceptance Jeremy receives from Zoe and her family will provide him with an alternative to the temptation of violence. They also help him to view his hallucinations positively.

This, from Flo’s deathbed scene:

And then the buds swelled and burst into flower and he stopped worrying … The blooms were large and spiky and deep red—red, of course, because Flo loved the color red. He knew this plant. It was Blutaparon rigidum, from the Galapagos Islands, only extinct a few years. The heavy blossoms covered the three of them and it was perfect and lush and comforting …There were more flowers, too—different flowers from his favorite extinct species all growing together in one extended family of green—the rosy red lace of Vanvoorstia bennettiana and the ruby-gulleted white trumpets of Nesiota elliptica.

Kinship of Clover advances a deep appreciation of difference and of the bonds of love that provide sustenance in a fracturing, threatened world. It is a wondrous example of how a political novel, in the right hands, can achieve high artistry.

In addition to the novels House Arrest and On Hurricane Island, Ellen Meeropol is the author of the dramatic program, Carry it Forward, about the Rosenberg Fund for Children. A former nurse practitioner and part-time bookseller, Ellen is fascinated by characters balanced on the fault lines between political turmoil and human connection. Her short fiction and essays have appeared in Bridges, DoveTales, Pedestal, Rumpus, Portland Magazine, the Writer’s Chronicle, and others. Ellen is a founding member of Straw Dog Writers Guild.

Céline Keating is the editor of the anthology On Montauk: A Literary Celebration (2016) and the author of Layla (2011), Play for Me (2015), and short fiction in many literary journals. Her website is www.celinekeating.com.
Share This