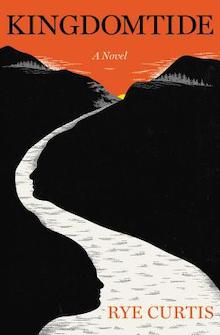 Kingdomtide, Rye Curtis’s debut novel, opens in a Vermont nursing home where Cloris Waldrip recounts the events following a plane wreck of twenty years earlier in Montana’s Bitterroot wilderness. After watching her husband and the pilot die, Cloris spends months wandering the woods, physically and emotionally lost. She promises that her “account should tell the whole of the story, even the unpleasant parts I’d rather leave out.” Over the course of the book, she keeps this commitment to honest storytelling, adding reflection and the odd bits of humor that hindsight can offer. Cloris’s narrative runs parallel to that of Ranger Debra Lewis, who heads the search party charged with finding the older woman. Though these women could not be more dissimilar — Cloris’s rigid sense of propriety, even in the woods, is at odds with Lewis’s recusant nature — both women are worn out and tired of society. Yet they keep going.

At the beginning of the novel, Cloris prefaces her tale with, “I no longer pass judgement on any man nor woman,” suggesting that she has come into contact with someone of dubious character. The Arizona Kisser, a fugitive accused of kidnapping and murdering a young girl and thought to be hiding out in the Bitterroot wilderness, fits the description. Curtis reveals details about the Arizona Kisser slowly, as Cloris becomes dependent upon, and later friends with, the masked fugitive. Several times, always when she feels the most desperate, Cloris tells him, “You are a decent man.” He says nothing in reply, and the reader, all but certain of his identity, begins to worry for Cloris’s safety. Later, when they are harbored in his cabin, he gives Cloris a set of extra clothes more suitable for the young girl he is rumored to have kidnapped and murdered than for Cloris. The tension spikes as the reader realizes the incongruity while Cloris does not.

A strangely interdependent relationship begins to form. Both characters want to escape society. Cloris forgoes an opportunity to be discovered by Lewis in favor of staying with the alleged fugitive. When their woodsy safe house catches fire and the Arizona Kisser suffers serious burns, Cloris valiantly attempts to return the compassion he has offered. When she finally learns of his transgressions, she insists that he is innocent while acknowledging that she can never know with certainty whether she is correct about him. She knows what she knows, though, and counsels the reader, “You’ve got to decide for yourself what you want to believe.”

Though Lewis and Cloris never meet, Curtis uses the reappearance of seemingly insignificant objects in each narrative to subtly remind the reader that the paths of these two characters are linked. At the site of the wreck, a wallet belonging to Cloris’s husband proves critical to Lewis’s ability to identify bodies; Cloris has also examined it, revealing details about her life prior to the accident. The same raccoon that Cloris saw feasting upon the pilot lingers until Lewis finally locates the wreckage. Later, the reader recognizes the sculpture of an eagle on which both Lewis and Cloris at different times stub their toes. The eagle, along with a wayward balloon that also appears in both narratives, serve to pin Cloris and Lewis to the same location. Though these convergent details could easily be overdone, Curtis handles them lightly. When Lewis asks a search crew member what was on the scene, the crew member only says, “Just a goddamn balloon stuck in a tree.”

Other objects take on weightier implications, such as a book Cloris finds in the cabin, The Joy of Lesbian Sex. To the reader’s surprise, the conservative Cloris reads the book and her perspective seems to broaden as a result. After the FBI shows up at the cabin and accounts for all the objects there, Lewis sneaks the same book home, like a child wanting to explore forbidden information. One of Lewis’s demons, aside from an ever-present thermos of merlot, is her recent divorce. Searching for Cloris, she is drawn into a relationship with a male colleague to whom she responds with sexual indifference, surprised to find she is more interested in the colleague’s daughter. The stolen book becomes a means by which she, too, broadens her understanding of what love is or can be. The book connects Cloris and Lewis, reminding the reader that both women are quietly searching for a way out of a wilderness that is at once emotional and physical.

By deftly weaving weather events through each character’s story, Curtis builds a sense of anxiety and anticipation. The night Cloris leaves the site of the plane wreck, a thunderstorm incites a fear of the unknown when she thinks she glimpses someone in a mask watching her. We later learn that, in fact, someone was — the Arizona Kisser, lured by the hope of scavenging supplies from the downed plane but whose mysterious and alarming presence suggests more nefarious purposes. At that moment, only he knows what he wants. The weather and his presence inspire movement, pushing Cloris down the mountain as the reader keeps turning pages to see what happens. Near the end of the book, a snowstorm at the log cabin threatens the survival of both Cloris and Lewis as they circle closer to each other — more movement, more near-misses. As Cloris absconds from the cabin, Lewis arrives. Urged to flight by the advancing search party, the older woman seems uncertain whether she wants to be found. “No doubt,” she tells the reader, “many of you will believe that I am a crazy old bullfrog to have walked away from the search party sent after me. Perhaps I am. It is mighty difficult to know your own mind.” The powerful element of weather drives this moment, heightening the sense of urgency even as Cloris stalls to reevaluate what she wants.

Curtis exploits the story’s geography to build dramatic tension while connecting the two narratives in time and space. In her rescue effort, Lewis stops at the home of one of the more colorful locals, who offers that he has seen campfires in the distance. He conjectures that the fires might be due to the Arizona Kisser, or the missing Cloris, or anyone, really. Knowing that the smoke signals the presence of Cloris and the fugitive, the reader can connect these dots, but Lewis cannot. The effect is visceral: The reader desperately wants Lewis to figure this out. Waiting intensifies the reader’s apprehension. There is other, more overt evidence of Cloris’s having passed through the wilderness, such as the stump where she carves her name in a dramatic moment, believing the site could become her grave. Although Lewis and her search party find this stump and pin their missing person to that exact spot, they don’t know when or why Cloris made the carving. But the reader does.

What the reader does not know is what would have happened if Lewis had found Cloris. But Curtis leaves us exactly where he should. The novel ends with a glimmer of hope about the power of resilience in desperate times. Cloris finishes her story by saying that nothing “escapes the hands of the clock. And nothing of life comes to mean exactly what you expect it will, and neither is it often simple nor easy, particularly when you get to be my age.” Each woman has learned something about her sense of self and about the intentions of others. Both women must move on, and the reader must, too.

Rye Curtis is originally from Amarillo, Texas. He is a graduate of Columbia University and now lives in Queens. Kingdomtide is his first novel.

Darcie Abbene is an adjunct professor at Northern Vermont University and Managing and Nonfiction Editor of Green Mountains Review. Her work has appeared in Parhelion Literary, A Portrait of New England, and Capsule Stories, and is forthcoming in Tupelo Quarterly. Darcie is working on a novel and a collection of essays on teaching and is a candidate in the Stonecoast MFA program.