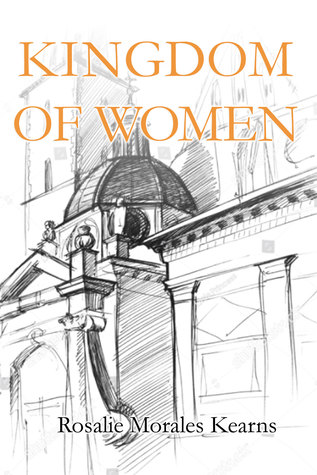 “The biggest lie of the patriarchy is to convince us women that we aren’t violent,” reads a postscript, scribbled at the end of a short story, which is mailed to an FBI agent by a female professor who knows that she’s being watched. Just an ordinary day in the world at the beginning of Rosalie Morales Kearns’ timely and powerful Kingdom of Women, which gracefully revolves around questions of violence, justice, anger, and goodness. Vigilante organizations of women are taking justice into their own hands, having been let down by the government and justice system for just too long — which, in these times, can be, extremely gratifying to read about. At first, their maneuvers of justice seem random and disconnected, amounting to explosions here and there, and rapists and murderers dying mysteriously. It takes some time for the government to realize the connections between these events, “as if the doings of women were beneath notice, as indeed they had long been.” Meanwhile, in North Dakota, a matriarchal, multicultural, feminist utopian society emerges and flourishes — Erda, “the republic of women.”

The novel covers a lifetime of geopolitical and moral conflict, grounded in vivid and compelling characters. Averil Parnell, the keystone of the novel, is the lone survivor of a massacre intended to wipe out the first class of female Roman Catholic priests. Once an ambitious and prodigal scholar, now wracked with survivor’s guilt and paralyzed by trauma, Averil embarks on an ill-advised affair and comes to be struck with visions, deemed a mystic over the course of the novel. Some of her earlier visions are more concrete — in one, she plays chess with the Pope — but the beautiful, lyrical, and lucid passages increasingly bind Averil to spirits of the past and to the natural world. After reading about a fourteenth century female spiritual seeker, Schwester Katrei — or Sister Catherine — who feels held back by her male advisor and goes on a transformative journey, Averil experiences one such vision:

As Averil is falling asleep that night at the Rectory, her room begins to shimmer. She is in a forest of trees that grow tall and pillar-straight, translucent as if made of glass. Somewhere in the luminous forest is the voice of Schwester Katrei.

I am illuminated, says the voice. I am perfected. No matter what manner of crime I commit, it is no sin, for I am firmly established in God.

Appropriately, Averil’s visions usually speak on multiple levels, in conversation with her personal dilemmas and movements in the novel outside of her knowledge or control. Shortly before this vision, she discusses current events theoretically with Catherine Beck, who becomes a rock through Averil’s life, more than friend and protector. Catherine searches for a quote from the bible: “Something about ‘people who hunger and thirst for justice.’” She’s not quite sure what the line is. Averil responds, affirming the sentiment, “that they’re blessed. That they’ll have their fill.”

The novel is triangulated between three loosely-defined relationships, which Kearns uses to anchor the reader: Averil’s affair with a former (yet unapologetic) rapist called John, her relationship with Catherine, and the tension between John and Catherine, about which Averil does not know. Centering around these three characters, Kearns peppers the chapters with an assortment of other characters, such as the FBI agent watching the professor, a trilingual reporter, an angry grad student, some of whom only show up once. Each chapter is composed of multiple vignettes, which makes the narrative feel like a pendulum, swinging back and forth in place and time. In this way, the novel manages to take a broad, bird’s-eye look at the world of the novel, so to speak — without neglecting the three central characters, whose entire lives unfold over the course of the story.

Watching the patriarchy manifest in Kearns’ world is so recognizable, and that the climate descends so chaotically into such a fully realized war feels very real. She weaves small telling moments — a wealthy young man who kills the nineteen-year-old he’s sleeping with by accident (yet pantomimes the murder, laughing about it later), a preacher who demands that women forgive rapists, a judge who deems a man’s murder of his cheating wife “understandable” — alongside news to cover large swaths of time:

News of the war came in constantly […] uneasy ceasefire, U.S. troops in disarray from internal dissension […] martial law was declared in the U.S., but some journalists reported that the laws were being enforced only against women: people arrested for curfew violations were almost all women, meetings broken up by police […] were rumored to always be gatherings of women or mostly women.

People choose sides. The United States allies itself with white supremacist and other radical militia groups; North Dakota secedes to become Erda and a collective of Indigenous American nations. Catherine becomes a powerful General in the Erdan army — yet Erda was once a place where even carrying a gun was shocking to onlookers.

The aftermath of the war is, predictably, messy. There are sensitive challenges, difficult, if not impossible, to resolve:

Men raised under the patriarchy were dysfunctional. Perhaps irredeemably so. It was not only a question of reeducating. They had to be resocialized. Reshaped. This was going to take a long time.

Kearns does not resolve the state of things neatly or painlessly, to her credit. While some of the views posited are frustrating to read, they are realistic, and it would feel trite for a story so thoughtfully wrought to end tidily. Each chapter opens with a quotation from a great thinker or Saint, many from the twelfth and thirteenth centuries. One is from Judith Butler, the contemporary gender and queer theorist: “How will we know the difference between the power we promote and the power we oppose?” Violence is relentless, on all sides, in this novel, often without due process, and Kearns weaves a thread of trauma not just through specific characters, but through her fictional but recognizable society as a whole. Something Averil says in the first chapter rings through at the end, decades later: “Anger doesn’t just disappear […] it bubbles along, it surfaces in different ways. You try not to feel it in every waking minute. You learn to live with it.”

Rosalie Morales Kearns, a writer of Puerto Rican and Pennsylvania Dutch descent, is the founder of Shade Mountain Press, the author of the magic-realist story collection Virgins and Tricksters, and the editor of the short story anthology The Female Complaint: Tales of Unruly Women. A product of Catholic schooling from kindergarten through college, Kearns has a B.A. in theology from Fordham University and an MFA from the University of Illinois.

Anna Press is a writer and educator, currently living in Brooklyn, NY with her husband and three rebellious dachshunds. She writes essays, reviews, and short stories, and is currently working on a novel. Talk to her on Twitter, where her handle is @annaepress
Share This