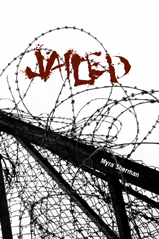 Not all of the narrators of the stories in Jailed have been to jail. But they’ve all been in jails. The distinction seems like it should be less complicated than it is.

If you go to the Wikipedia page for American Prison Literature, you’ll see a quote that begins, “Prison has been a fertile setting for artists, musicians, and writers alike.” This word, “fertile,” is unsettling.

Most of the stories in Jailed are told straightforward. If we leave the collection thinking any one thing, it is definitely not that working in jails for so many years was a “fertile” experience for the author of the collection, Myra Sherman. If anything, we leave with the unequivocal feeling that jail is a wasteland: for those incarcerated, for those who work there. And while, yes, in this wasteland there are stories that need to be heard, they are the stories of human beings withered, winnowed into shadows of human beings.

These are the inter-connected stories of women and men in jail; of social workers and deputies who work in jail; of detectives who read detective novels and kill their wives and then are sent to jail; of husbands and wives whose partners work in jails.

In Prose and Cons (no, not the Saturday Night Live skit), but the book, Prose and Cons: Essays on Prison Literature in the United States, D. Quentin Miller writes in “’On the Outside Looking In’: White Readers of Non-White Prison Narratives” that the “prison narrative cannot follow a conventional narrative order,” because the narrative is written for those outside, because “[the prisoners] bear the burden of educating the liberal and the liberated white reader as to the social circumstances that surround the narrative while also persuading the reader to sympathize with the subject, rather than judge him [or her].”

While all of Sherman’s stories begin in media res, mostly due to the nature of the form of the short story, they do seem, maybe because they’re a different species of prison narrative, to reject where Miller’s essay is going, which is to say that there’s some sort of explicit purpose in prison literature–like how we understand the context and the import of “Letter to a Birmingham Jail.” “[the] literary value [of prison writings] is not only their ability to persuade, but to mediate separate worlds and to rend their message with sufficient complexity and artistry.”

What’s most disturbingly effective about Jailed is that Sherman shows just how un-separated, at times, these worlds are, for the inmates and the professionals who work with them. Most of this is done through the first-person point of view:

In “Jail Work,” Zelna, a mental health professional at the jail, thinks:

Sometimes it was hard to tell the mental health staff from the deputies, the deputies from the inmates. Tom was right. We all sounded the same after awhile.

The characters in these stories sometimes feel how we think they’d feel; whether we learned this through watching T.V. versions of these kinds of characters or whether we’re practicing real feelings of empathy.

In “Inmate,” we meet Harry Woods:

On the job, Harry could almost convince himself he was the real deal. Dressed in discounted Brooks Brothers, hair styled to enhance the wave; he grabbed everyone’s eye, the sharpest detective in homicide with a great career and a wife who looked like Cameron Diaz.

Harry is a detective who loves British detective novels; Harry seems a little like any other kind of detective we’ve seen on T.V.; until Harry kills his wife, in what might be self-defense; and yet Harry doesn’t recognize himself as an inmate, so he asks for a barber, who turns out to be a nun, to shave his head, which seems very much like something someone on the outside can understand:

He wasn’t worried about somebody recognizing him. It was more like he didn’t want to recognize himself.

Then there’s Deputy Fred Lopez, in “Night Shift,” who goes through a startling metamorphosis within a few sentences, while watching some inmates try to get his attention, to fuck with him:

Like bugs under a microscope, Fred thinks. Filled with middle-class guilt, he feels sorry for them. But when they make gang signs, Fred’s pity turns to repulsion. He shakes his head. When they pretend to be choking, he goes off on them.

This is the same Fred who always wanted to be a chef, but was viciously beaten after leaving the restaurant where he worked, and so afterwards resigned himself to law enforcement. Just as the reader is wondering whether or not to sympathize with him, to forgive his outburst, he sleeps with an inmate, Lucinda.

As his shift winds down, he tries to rationalize and understand his actions:

He knows there’s no excuse, but he’s not sorry.

This kind of story is balanced with “Third Strike,” a series of letters from a mother to her infant daughter, a mother who shoplifted a $200 dress and was sent to jail for 25 years, because it was her third strike.

These examples might make it seem like the inmates are more redeemable than the professionals who work with them, which isn’t the case. More than anything, it’s the jail itself that seems irredeemable: the pee-holes and rubber rooms, the constant sour smell of piss and vomit.

There’s something about these stories that made me immediately investigate the author. In a complete about-face of the New Critical tactics I prefer, I needed to see that she wasn’t just making this up. And yes, I know this is fiction. And no, I can’t rationalize this reaction. It’s not that someone who hasn’t had these experiences doesn’t have permission to write about these kinds of experiences. In his Research Notes here at Necessary Fiction, Ben Nadler writes about writing Harvitz, As to War and his main character who is sent to prison at Fort Leavenworth:

To access those details, I ended up turning to an internet forum for women whose husbands and boyfriends are imprisoned at Leavenworth, and other similar facilities. The more experienced women addressed the other women’s concerns, such as how their men would be eating, how they could receive mail, and how safe they would be. I felt like a bit of a creep peering into these women’s lives—they were all dealing with real pain, and had not put up their public forum for the benefit of first time novelists—but part of being a writer is entering spaces that weren’t meant for you.

But I do know that I think it was important Sherman wrote these stories–not because she’s pushing some greater lesson, some moral to be gleaned, but because these particular kinds of prison narratives, especially from the point of view of professionals working in the system, is so rarely told.

In “Linda M.,” Maureen, a clinician on the Mental Health module of the jail says of her patient, the inmate Linda M.:

I wanted to find meaning in her tragedy, but couldn’t. Our lives had intersected randomly. Like dandelion fluff, we’d drifted together, then parted. There was no meaning, only escape.

Of course, there’s no escape for Linda M. For Maureen, there is the hypothetical escape of leaving her job. But then, there’s everything else on top of that as well, the economy, the sense of identity and pride that comes alongside having a profession. These are the constraints that keep Maureen in jail. And when Linda M. asks, ““Am I trapped? Are you?” The reader knows the answers to both are a resounding, defeated, “Yes.”

Except the very first story, “Three Nights in Jail,” features a social worker, Karla, who walks off the job. While what jail does to a person, whether there by force or for work, is suffocating and debilitating, Sherman reminds us, from the very beginning, the very real difference: that those of us on the outside can choose to stay in.

Myra Sherman received a Master’s in Social Welfare from The University of California, Berkeley and is a licensed clinical social worker in California. She has worked as the Director of Mental Health in a San Francisco Bay area county jail, and as a therapist specializing in patients at risk for suicide, homeless substance abusers and mentally disordered sex offenders. Her writing is inspired by her clinical work and gives voice to the marginalized and forgotten. Her fiction and essays have appeared in numerous literary journals including Ars Medica, 580 Split, Fifth Wednesday Journal, Mobius, JMWW, Storyglossia, Skive, r.kv.r.y. and The Medulla Review. After living in Israel, upstate New York and Berkeley, Myra now lives and writes in Lake County, California.