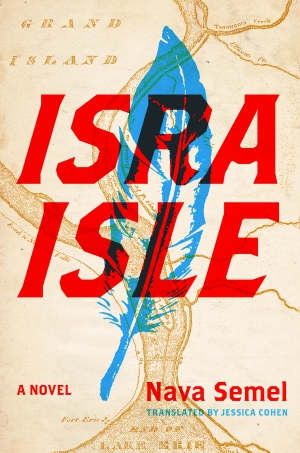 It’s rare to read a book as brave and brilliant as Israeli author Nava Semel’s Isra Isle, a book that defies classification. Is it a detective novel, a la Chabon’s The Yiddish Policemen’s Union? Is it a historical novel, rooted in the real life of Mordecai Manuel Noah, an American journalist and visionary, who in 1825 bought Grand Island, a piece of land downriver from Niagara Falls, with the hope of creating a Jewish homeland that never came to be? Or is it an alt-universe, science fiction novel where the reader gets to find out what might have happened if Noah’s vision had succeeded? The answer, of course, is that this extraordinary and extraordinarily strange book is all three.

The first section begins in September of 2001, just prior to the events of 9/11, with Native American NYPD detective Simon T. Lenox trying to track down one Liam Emanuel, a recent immigrant from Israel, who has gone missing in the U.S. Emanuel discovered that he inherited Grand Island from Noah and came to claim it. Section two shifts back in time to 1825 and is narrated by Noah’s mysterious Native guide. We follow Noah as he purchases the island from the Indians and attempts to create a new Jewish homeland. In section three, we shift back to an alternative history of September 2001, a history where the Jewish homeland exists on Grand Island, or “Isra Isle,” not in the Middle East, the holocaust (at least for the Jews) has not occurred, and Jewish traditions have intriguingly merged with Native American culture:

Think what could have happened if the Jews hadn’t had a ready made island shelter. The Jewish people’s fate could have been as bad as that of the Gypsies, the handicapped, the mentally ill, and the homosexuals.

The novel reads like a strange dream where time and space work at the quantum level and therefore don’t abide by our normal rules of cause and effect. Words and objects, even the names of characters, bleed from one narrative into another:

But Simon T. Lenox prefers to chronicle events before they occur. To him, going backwards is the most logical direction. Putting toe to heel is not a regression, because it allows him to uncover the clues from which the future actions of the subject will derive.

The result is that the reader has the disturbing feeling that everything has happened before and will again, that home is an idea and not necessarily a place that exists outside our own subjective reality. Of course, Simon’s Native American identity and the fact that he often has visions that conflate time and space play perfectly within Semel’s carefully crafted structure.

Semel’s decision to have a Native American protagonist uncover the mystery of a lost Jewish homeland is loaded with nuanced riffs on the nature of home. For, of course, the island was not empty when Noah purchased it—hundreds of native men, women, and children had to be evicted:

On the information brochure from the Chamber of Commerce one can also read of the island squatters, who were forcibly removed by the Niagara sheriff. It took five days and nights to burn down seventy huts and make a hundred and fifty men, women, and children refugees.

The history of any land is complicated, as is the history of any nation. The Iroquois gained their land by pushing out the Huron and the Ojibwe. In turn, the Ojibwe pushed out the Sioux. In each case, native people displaced others who had been there before them. Semel’s choice to have two of the sections narrated by and/or focused on Native Americans caught up in the story of the new Jewish homeland seems to be, if not an implied critique, at least an acknowledgment of the reality behind the creation of any homeland—someone is always displaced.

It is this fearlessness in tackling the big themes that makes Semel’s novel so interesting: What constitutes a homeland? What does it mean to be an exile? What is the nature of both individual and national identity? Of course, there are no easy answers to questions like these, and Semel offers none. Instead, she conjures up a story that breeds more and more questions:

Is one’s homeland the place where a person evolves into life, or is that a choice made in adulthood, as one chooses a fateful name? Perhaps it is also your memory Father Raven, that plays tricks on me and the land that was given to my mind’s eye is not at all the homeland where our ancestors lived. Am I entitled to call my island “home,” even though I do not live in it permanently? Even though from sun cycle to sun cycle it becomes more of a dream? … If land is not property, then anywhere may be considered a homeland, and the Jewish tribe may therefore adopt the island even without a deed of ownership. The Jew is free to settle in whichever land he desires. Why, then, does he insist on drawing borders for himself…

The genius of the third section is in the way it shows us how no “homeland” can solve every problem. For while the Jews escape the holocaust in the alternative reality of section three, they do not escape 9/11, and while the Jewish people have gained a secure homeland, they may have lost their sense of identity.

Edgy, tight, introspective, and, at times, almost stream-of-consciousness narration pulses through each sentence of this narrative. Semel’s prose dazzles, and Jessica Cohen’s superb translation harnesses every bit of that energy delivering a daring, provocative, and entertaining novel.

Nava Semel has published novels, short stories, poetry, plays, children’s books, and a number of TV scripts. Her stories have been adapted for radio, film, TV, and stage in Israel, Europe, and the United States. Her books have been translated and published in many countries. Her novel And the Rat Laughed was adapted into a successful opera, and it is also being made into a feature film, directed by David Fisher. Semel is on the board of governors of the Yad Vashem Holocaust Museum. Her book Becoming Gershona received the 1990 National Jewish Book Award in the U.S. She has received many other literary prizes including the Women Writers of the Mediterranean Award (1994) and the Prime Minister’s Prize (1996). She is married to Noam Semel, Director General of the Cameri Theatre of Tel Aviv, and a mother of three children. She lives in Tel Aviv, Israel.

Peter Grandbois is the author of seven books. His poems, stories, and essays have appeared in over seventy journals. His plays have been performed in St. Louis, Columbus, Los Angeles, and New York. He is a senior editor at Boulevard magazine and teaches at Denison University in Ohio.