In the Season of Blood and Gold by Taylor Brown 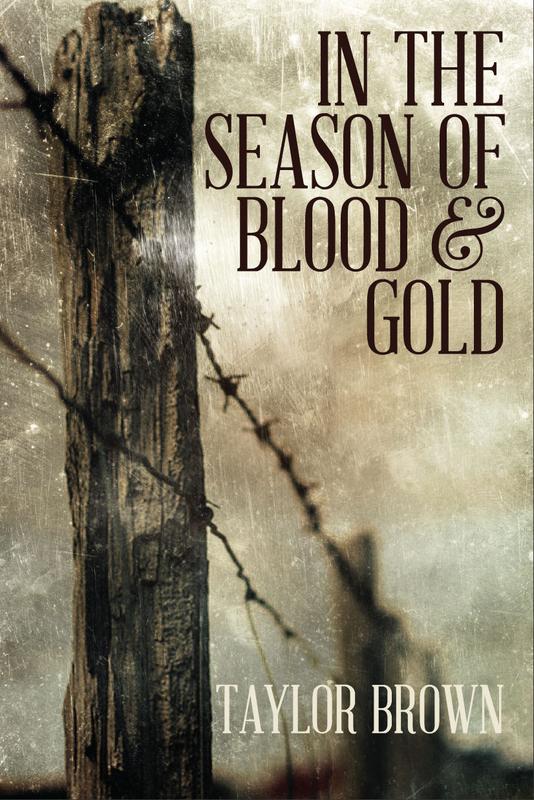 Taylor Brown hails from the south, and if a reader happened to miss such a fact in his bio, the stories in his debut collection will undoubtedly confirm such a geographic connection. And while at times In the Season of Blood and Gold may seem to tread in the familiarities of Southern Literature, Brown isn’t so much just a writer from the south as a writer utilizing the south as a backdrop to demonstrate his greatest talents—range and syntax.

Regarding range, in the featured twelve stories, Brown skillfully moves back and forth between contemporary narratives and tales that span all the way back to the Civil War era. He even appears to jump forward in time, including a post-apocalypse tale where characters speak of Osama bin Laden and remember him as a “Terrorist from before.” While Brown is certainly not the first to accomplish the task of spanning eras, only the story collections of Ron Rash come to mind when considering a Southern writer’s versatility in managing to bridge generational gaps while illustrating how a region and its people have changed—or not changed—over the course of time. The range in time period, again, isn’t exactly new or unseen in contemporary American fiction, but Brown’s steady hand and linguistic skill allow for these stories to unfold one after the other without any need to pause and gain one’s bearings. There’s a kind of timelessness to this collection, not unlike flipping through a family scrapbook that intersperses black and white photographs among digital colored printouts. Some stories may read as though tinted by a sepia filter, but they’re all of the same family and the same mind, and to the benefit of readers, Taylor Brown’s mind is filled with stories worth returning to today, tomorrow, and long into the future.

The collection begins with two stories that harken back to at least the 1940’s and center on illicit relationships that provoke men to commit violent acts. The opening story, “Rider”, concerns a geese poacher faced with either admitting his transgressions or fulfilling the wishes of a local warden, who believes the surrounding land to be hexed by a witch. The supposed witch is in fact the rider’s mistress, and the developing conflict for the rider forces him into a decision with undesirable options with any choice he makes. Brown manages this drama succinctly, compacting the narrative by carefully constructed scenes and tight language. Take the opening paragraph for example:

Iron-shod hooves stove the old wagon road, rock-jeweled, like gunshots. That sound lying in ambuscade in her chest for so long arrived now out of a quadrant near alien to the meat where she stored him. Her heart.

It’s not the most digestible paragraph, but it artfully captures what the rider’s mistress holds closest to her. By the story’s end, a reader who’s managed to keep these sentences in mind will understand the affect Brown intends with such an opening paragraph, and the rider’s decision makes the opening paragraph all the more significant. While some readers may find the language daunting at times, Brown is to be commended for his meticulous and sometimes rhythmic prose that enlivens each story.

Such is the case in the collection’s second story, “Kingdom Come.” In the story’s early pages, Brown again demonstrates his succinct style, establishing the essence of the story in one, well-crafted paragraph:

His loose-laced boots crunched on the frost mud road. The road wound over a small rise to the west and toward this he tread, his black slouch hat haloing his head in shadow, the sun rising pale and heatless at his back. He had no pistol, no car. No kin to hide him. None who would. He had only her, his stepsister, no blood between them but what they’d made, and whether she would love him or hate him for what he’d done he could not know. Would not. Her husband’s face had looked so surprised at his end, his blood so bright and diffuse against the hard-packed snow.

Having wronged a family heavily invested in bootlegging, Brown’s nameless protagonist (known only as “the boy”) proceeds in committing a heinous act that he believes will right his wrongs, but as the story unfolds, Brown illustrates how the boy’s decisions bring further harm—rather than resolve—to himself and his family. Like the collection’s first story, “Kingdom Come” settles nicely into its period setting without relying too heavily upon it, and what takes precedent is ultimately the roots of all great fiction—drama, characters worth investing time in, and exceptional prose.

Stories set in modern day achieve much the same effect. “Covered Bridge” and “The Tattooist’s Daughter” being two highlights. In the latter of the two, Brown shifts away from male protagonists and settles on a relationship between mother and daughter and the way generational gaps have a way of dividing families. The violence that appears in other stories all but vanishes only to be replaced by caustic dialog and the disapproval a mother has for a daughter who’s chosen to live her life as one of the region’s best tattooists. The daughter’s announcement that she’s pregnant and her subsequent revelation of the actual truth of the issue keeps the story steeped in tension, and while the themes of the story may seem familiar and rooted in domesticity, Brown twists the story in ways unrecognizable and fresh.

Elsewhere, Brown’s finest modern era story, “Covered Bridge,” concerns a father and son coping with the loss of a wife and mother. Her family’s land has been lost to developers, who aim to overrun the dilapidated homesteads and replace them with luxury houses. It’s not the first time in the collection that readers note the issue of progress and its effects on matters of class, and like so many of Brown’s other protagonists, the father and son refuse to allow their way of life to be comprised without fighting back. The end result, however, yields tragedy rather than triumph, and Brown strikes the proper tone in conclusion:

He closed his eyes to the blossoming flood, the terrible hemorrhage of beauty in the river, and crumpled fully to the deck, hearing only the river run onward, so jagged-toothed and sweet.

The lineage of Southern Literature spans decades if not centuries, and over the course of time, names will be forgotten and stories will be retold, substituting names and dates for upgraded versions to appeal to contemporary readers. In the Season of Blood and Gold is the sort of collection that has staying power, and Taylor Brown has the type of talent that will draw imitators rather than detractors. More importantly, he’s a writer capable of capturing the essence of a place while not forcing readers to immediately label him a regional writer. Ultimately, his prose is more impressive than his knack for place, and given such ability, one should expect great things from Brown going forward.

Taylor Brown was born on the Georgia coast. His short fiction has appeared or is forthcoming in The New Guard, The Baltimore Review, CutBank, The Coachella Review, storySouth, CrimeSpree Magazine, the Press 53 Open Awards Anthology, and many others. He received the Montana Prize in Fiction for his story “Rider,” and he was a finalist for the 2012 Machigonne Fiction Prize. He lives in Wilmington, North Carolina, and his website is www.taylorbrownfiction.com.

Brian Seemann’s fiction appears or is forthcoming in REAL, Red Savina Review, and Mojave River Review among other journals and has been anthologized in Home of the Brave: Somewhere in the Sand (Press 53) and The Mix Tape: A Flash Fiction Anthology (Flash Forward Press). Winner of the William J. Stuckey Memorial Prize for fiction, a Southern Writers Symposium: Emerging Writers Contest Finalist, and an MA and MFA graduate of Wichita State, he currently lives in Colorado.