In the Company of Men by Véronique Tadjo 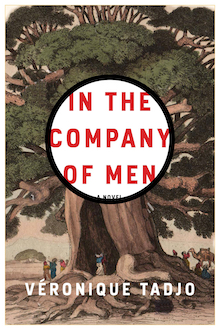 The sheer number of people killed by COVID-19 makes it meaningless to say any other viral epidemic was “worse,” but the suffering and torture inflicted on Guinea, Liberia, and Sierra Leone during the Ebola outbreak from March 2014 to June 2016 go beyond what anyone wants to imagine. For the Ivorian novelist Véronique Tadjo, it’s crucial that such imagining takes place.

First published in 2017 as En compagnie des hommes, and now an English-language release as In the Company of Men, Tadjo’s book is less a narrative than a collection of voices salvaged from the devastation. A lightly fictionalized oral history of the Ebola crisis, it’s told to us by the doctors who fought to contain it, the survivors who became untouchables after beating back the disease, the grandmother who took in an orphaned boy driven to the streets after being marked contagious, and even some observers from the wider natural world. The baobab tree, the bat, and the Ebola virus itself all bear witness and tell their tales.

Tadjo, the Grand Prix de Littérature d’Afrique Noire winner for Queen Pokou: Concerto for a Sacrifice, has experience working trauma into precise, yet sometimes fantastical prose. Queen Pokou tells alternating versions of the Akan legend wherein the titular monarch sacrifices her only child for the good of her people. Faced with such daunting subject matter, Tadjo never dwells too long in the misery, and even lets voices of hope enter into the chorus.

She operates in a similar mode here, allowing the Ebola crisis to become its own cautionary fable, a warning to be passed down in stories for generations to come. We get a sense early on that Tadjo will provide space for us to breathe as we move between horrors. When the trees tell us how their “crowns merge with the sky’s cotton-wool dreams,” it is a respite from the brutalities at ground level. And the more we absorb what the forest tells us, the more Ebola becomes a visitor from another realm, and not simply a monster to be beaten back.

“What humans don’t seem to understand is that I have no predilection for them,” says the virus. “I won’t seek them out. It is they who come to me.” The sentiment is menacing in its stark eloquence, but leaves us feeling as if it’s Ebola, not us, that has found itself out of place — an idea echoed in Tadjo’s title.

Among the humans, the varieties of agony produced by Ebola seem endless. There is the child forever traumatized from watching, hidden, while the corpses of his parents are doused with disinfectant. There is the funeral gathering, put on before knowledge about the disease was widespread, that became responsible for more than 300 deaths. And there is the ruthless haunting of survivors, with the infection “potentially leading to blindness, extreme fatigue, and cognitive difficulties.” Tadjo writes: “It will take years for us to recover from what we’ve lived through.”

As different as their torments are, the scattered human voices often speak in a similarly grim register, plainly stating their traumas before moving on to whatever obstacle they must overcome next. “Suddenly, he vomited all over her shoulder. Her white coat was soaked and stuck to her skin. That’s how she caught Ebola. A few weeks later, she died.” Perhaps this numb, unadorned recounting is inevitable, as fighting Ebola requires a single-mindedness that doesn’t leave room for outside thoughts. Even specters are dismissed as nuisances. “If a ghost comes to visit me one of these days — or nights — I simply tell it to leave me alone,” says a man tasked with burying the dead.

The lamentations of those who, rather than battle the virus, battle to retain their humanity in the face of the plague, resonate more on a gut level. “Board up the windows if you like, but I’m staying put. I want to die in my own bed. Burn down the house if you must, but leave me in peace!” cries a mother desperate to live out her final days in the house where she raised her family. The struggle for dignity feels more winnable than a fight against an all-powerful and invisible enemy.

Meanwhile, the non-human voices, removed from the fight entirely, provide a break from so much despair, and also serve as the book’s fonts of wisdom. “Did you know that no other terrain shelters as many living creatures as the forest does? Were you aware of that?” asks the baobab tree. “I’m not to blame for this tragedy. It has happened entirely against my will,” scolds the bat. “Maybe humans are afraid of me because I remind them how fragile and evanescent life is. From one day to the next, everything can change. Chance is inscribed in their genes. They’re born by chance, by the accidental nature of existence,” says the virus.

A novella as propulsive as it is gut-wrenching, darting seamlessly between the ethereal musings of an ancient forest and the raw logistics of vaccination politics, In the Company of Men is essential reading that will serve to remind and educate its readers long after Ebola, COVID, and whatever other pandemic come and go. As a local prefect puts it: “Are we better prepared if disaster strikes again, or has everything fallen into oblivion already, crowded out by the thick bustle of our days?” It’s hard to know. But if we can’t hug or touch or cry in mourning together, and if we have nowhere to put our grief, at least we have a repository for it in the written word. The better our memories are, the better chance we have of not repeating our mistakes.

Véronique Tadjo is a poet, novelist, academic, and artist from Côte d’Ivoire. She earned a doctorate in Black American Literature and Civilization from the Sorbonne, Paris IV, and went to the United States as a Fulbright scholar at Howard University in Washington, DC. She headed the French Department of the University of the Witwatersrand in Johannesburg until 2015. Her books have been translated into several languages, from The Blind Kingdom (1991) to The Shadow of Imana: Travels in the Heart of Rwanda (2001) and Queen Pokou: Concerto for a Sacrifice (2005), which was awarded the Grand Prix de Littérature d’Afrique Noire in 2005.

Matt Matros lives in Brooklyn, NY. His work has appeared in Electric Literature, The Washington Post, Mental Floss, and on the Ploughshares blog, among other places.