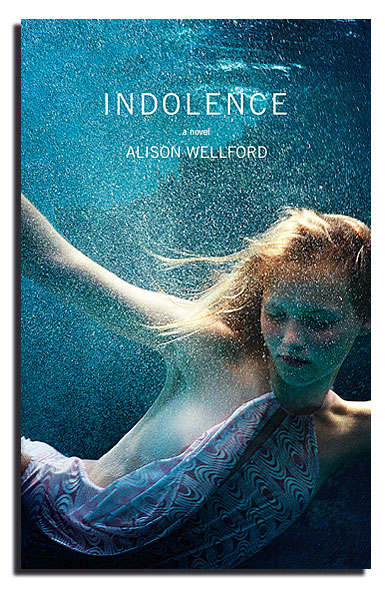 Alison Wellford’s first novel, Indolence, is told in the first person by Maria, a sixteen-year-old American girl whose parents live in the South of France. She tells of her sexual awakening, passion, domination and attachment to an older man, Omar, at a time of intense emotional upheaval over the summer and autumn when her mother dies. The writing is at times painful – it is raw, yet innocent and totally credible. One may not like Omar but the narrator certainly does. She does not hide his faults but ascribes these generally to traits of character – how he is.

Omar himself could be a stumbling block to enjoyment of the novel but the treatment of his character is largely sympathetic, seen through Maria’s eyes. She is attracted to this elegant older man who wears beautiful clothes and knows so much about art, especially Impressionism (with its links to the area of France where they live). That he is half-Moroccan, has been an art dealer and mixes in the shady world of art theft makes him even more attractive. He decently refuses her first (perhaps semi-innocent) approaches but not her direct ‘assault’ in his own home:

I marched to his door. He was hiding inside. I knocked. No answer. I kicked the door but then stopped. I was afraid. Answer the door. Don’t answer the door.
When I looked up, his arms were crossed, his hips jutting out. He could not have known [that her mother had just died] but he reached out and held me as if he did. We kissed, a too wet, a too thick kiss.

Maria’s first sexual experience is recounted minutely, matter of fact: “I wasn’t sure how long we’d kiss or what to do next.” She watched a spider’s web, wafted by the ceiling fan: “Sex should’ve changed everything.” (But she doesn’t say if it did.) “He fell directly asleep for a time and I waited.” Not romanticized:

There was a stain on the bath where I had been sitting, like the stain on the bed, and I turned away in embarrassment.
You’ve never been with a man, he said.
He was gentle with me in the bath, not like he was in the bed, almost apologetic, and I wondered if that’s how all men loved their women, and if it would change next time, if I would ever be the one to lick the wounds I had inflicted upon him. Of course I hadn’t been with a man.

It was a painting of a naked girl on the bed, her legs open, just a floss of hair there and some strange diaphanous smoke, or a scarf, floating above her thigh. Her arm was draped over her breasts, her hair flowing behind her, the bed tilted as if you could enter the painting – an invitation … the girl revealing nothing about herself but her sex, locked up in some great interior mystery, but maybe that was the mystery of youth, of her being just a bud of a girl, that her life had yet to take hold of her, and in fact, was about to happen.

As we follow Maria’s account of her summer, we learn about her father and mother, of their shared love and protective environment, her frustration and sorrow at being kept at boarding school in the States, of her poor school results, lack of friends, awkwardness when offered friendship by Annie (to whom she writes unposted letters later – an almost friend). She is a sensitive yet tough young woman who survives.

At the funeral of her mother, Caroline MacVeigh, the priest emphasizes that she was a wife and mother, the greatest gift to the world. “There was a burning in my chest and the shadows behind us felt heavy and the light was thick, and I knew it was a moment in which something was happening, my mother was dead, but this realization didn’t make it any more real to me.” At the funeral and at several other points in the novel, we are told how much Maria resembles her mother physically and we see in her writings, imagination and love for Omar that this is truly so.

Maria feels guilt at her behavior towards her parents: the shocking last conversation with her mother, her disappearance from her father. She matures throughout the telling of her story. She does not feel guilt for her behavior with Omar because, she says, this is something of her very own. She does need to feel in control of the relationship, however, and when this is no longer possible, she acts: “Each painting was a window to somewhere else, but now I was inside. I had to think about an exit and I worried that once I left, I would forever mourn this place …”

Indolence has connotations of wishing to avoid trouble, love of ease, laziness, avoidance of responsibility, disinclination to exertion – all of which we find in the novel. At the party at the beginning of the summer, Maria’s mother calls Omar “the do-nothing king” and Maria picks this up, in her autumn hiding, calling their couple: “le roi et la reine-fainéante.” A secondary, medical, meaning for indolence is that of freedom from pain or suffering – which is I think the narrator’s goal: deliverance from suffering caused and experienced.

Alison Wellford earned her BA from the University of Virginia and an MFA from Queens University of Charlotte. She has worked in photography and design for fifteen years in various cities in Europe and currently resides in Barcelona. Her work has appeared in The Gettysburg Review, among other journals, and has been nominated for a Pushcart Prize. Indolence is her first novel.