In The Distance by Hernan Diaz 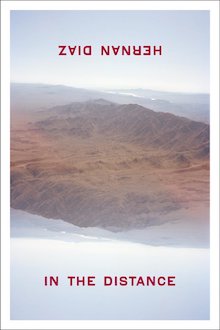 Hernan Diaz’s In the Distance is more than just an atypical Western: it’s also an atypical ‘New Western,’ charting out fresh territory even among those postmodern novels that appropriate the conventions of the classic Western for subversive purposes. It follows the misadventures of a young, wayward, and largely speechless Swedish emigrant who finds himself accidentally traversing the harsh landscape of nineteenth century America. With its choice of protagonist, the novel casts aside the stoic, steadfast settlers whose presence usually defines the Western and replaces them with a confused, often clumsy adolescent incapable of settling anywhere. Then, not content to simply humanize one of the faceless beggars among the “wretched refuse” of the Old World’s “teeming shore,” In the Distance makes playthings of the narrative trajectory and language that are typically found in both the Western and the New Western. Much as its protagonist takes a childlike view of the unfamiliar world he lands in, and much as he relies on trial and error to figure out how it works, the novel itself finds a sort of innocent wonder in mixing and matching the key elements of its two genres.

Sent abroad by his father to escape a life of rural poverty, Håkan Söderström is a naive young boy dispatched to find his fortune in the place he knows only as “Nujårk.” Traveling in the company of his elder brother, Linus, he boards a ship in Gothenburg with a plan to cross the Atlantic. While changing vessels in England, however, the two brothers lose one another. Håkan promptly climbs aboard another ship bound for the Americas, convinced that Linus will reach New York first and await his arrival there, but instead of docking in the United States he is swept past Buenos Aires, five thousand miles off course, and then, after rounding Cape Horn, he ends up abandoned and alone in California. From San Francisco, still determined to reunite with Linus, Håkan sets out on a haphazard journey to the east coast on foot.

So much for a Western novel about purposeful pioneers intent on settling in the West. So much, too, for a Western whose hero either domesticates a frontier territory or is domesticated by it. Håkan’s wanderings see him embroiled in not just one of the mythic ventures of the American West, but outlandishly, implausibly, in an abundance of them — in a gold prospecting outfit and a small-town racket, in an eccentric naturalist’s scientific expedition, in a wagon train journey to the northwest, in conflicts with Indians and religious zealots, in a shootout and a flight from the authorities, in a standoff with a self-aggrandizing sheriff, and in more besides.

Yet despite applying the kitchen sink approach to a Western narrative, In the Distance never feels overstuffed or capricious, never reduces Håkan’s journey to a satire or a tragicomic picaresque. It achieves this feat largely because its prose is so tightly controlled, so grounded in its young protagonist’s perspective, and so respectful of the demands imposed on it by its guiding conceit. Prior to the novel’s release, Diaz spelled out this conceit in an interview with the Paris Review. “[O]ne of the most fascinating formal problems in literature is point of view,” he said,

because taken to its ultimate limit, I think it’s also an ethical problem, since it’s related to power. How much about your characters do you know? How far into situations or people can you see? … I [stick] with Håkan’s point of view in a very drastic way, in that regard. If he doesn’t understand, neither do we.

This is no exaggeration. Håkan Söderström is an immigrant to America with almost zero command of English. To him the language is “a mudslide of running, slushy sounds” and “some particularly gelatinous vowels.” Simple sentences strike him like this: “Frawder thur prueless rare shur per thurst. Mirtler freckling thow. No shemling keal rearand for fear under shall an frick.” Moreover, Håkan is a child with virtually no concept of adult behavior, interests, and motivations. He doesn’t grasp the fundamentals of sexual attraction, commercial exchanges, assumed authority, the exercise of power, or the forces that encourage people to manipulate and exploit others. He looks older than his years — he is preternaturally tall and bulky, effectively a giant — but with his habitual silence amidst the hubbub of a foreign tongue, and his bafflement in a world governed by greed and guile, he comes across as the Michael K. of the wild frontier. He is a lumbering yet meek behemoth, abandoned to the elements yet capable of survival, and absolutely single-minded in his dogged pursuit of a distant desire.

Crucially, though, Diaz doesn’t go for the easy option of allowing an omniscient narrator to explain what’s happening around Håkan, or what’s going on inside his head, whenever the boy is mystified or alienated by events. Nor does he resort to first-person prose that allows Håkan to spell out his confusions, his emotions, his desires and his hopes. Instead, Diaz tries his hand at some aesthetic alchemy. Literary naturalism requires readers to infer the thoughts and feelings of a character from a more or less objective description of their behavior. Free indirect style conveys a character’s impressions of the surrounding world by channelling them into largely depersonalized, third-person prose. Diaz amalgamates these two technical devices, applying free indirect style to a character who has to read his own world the same way we read naturalistic literature — one who can only observe incomprehensible things and guess at their apparent meanings, their seeming causes, and their potential names.

At its best, the effect of this alchemy is both engrossing and disorienting, offering partial access to the thoughts of a person who watches strangers go about their business as if they belong to another species. “After a while,” Håkan observes of the gold prospector James Brennan,

he stopped, spat on the rock, and rubbed it with his fingertips. Suddenly pale, panting and stumbling stiffly like a flightless bird, he went to his children, dragged them to the hillside, and seemed to explain to them what he had just found. With eyes shut, he pointed first to the sky, then to the ground, and finally to his heart, on which he tapped while repeating the same phrase over and over.

In other instances, alien sights for which Håkan has no terms of reference are described almost entirely in impressionistic prose. As he ventures into the Midwest, for instance, Håkan comes across a beast apparently “made out of two different bodies ineptly put together,” with a head “so massive [that] it seemed to have been dreamed onto the rest of the body,” “as if nature had changed its mind halfway through it.” Call it by its name and the buffalo loses the majesty these words confer upon it. Convey it through the eyes of a child who’s never seen it before, a child who also lacks the capacity to describe it, and by virtue of the language alone, rather than the imagination, the buffalo becomes a creature every bit as magical as something plucked from a fantasy novel. And even when the passage of time allows Håkan to pick up some rudimentary English, Diaz sustains his torque on the language by confronting Håkan with sights that shatter his syntax. Alone in the desert somewhere, the boy comes across a mutilated corpse. This is as much as he is able to articulate: “Corrupting, there, forsaken, becoming, already, nothing.”

It wouldn’t be quite right to say that Diaz takes the novel’s conceit to wildly experimental extremes or applies it with the rigor of an Oulipian constraint. There’s an ease and looseness to In the Distance that makes it easy to be immersed in the story of Håkan Söderström and to not have to attend too closely to Diaz’s technical tricks. But the novel is shot through with breathtaking imagery and moments of real profundity — an unforgettable incident on a salt lake, a gut-wrenching sequence in a desert cañon, a tense climax in a subterranean enclave — and all of these derive their power from Diaz’s meticulous approach to his protagonist’s point-of-view. If the raw action of In the Distance would make it a compelling Western in any event, it is finally a novel of larger, more sweeping ambitions which it realizes through the sheer force of its style.

Hernan Diaz is the author of Borges, Between History and Eternity (Bloomsbury 2012), managing editor of RHM, and associate director of the Hispanic Institute at Columbia University. He lives in New York.

Daniel Davis Wood is a novelist and essayist based in Birmingham. His début novel, Blood and Bone, won the 2014 Viva La Novella Prize, and his literary criticism has been shortlisted for the Observer/Anthony Burgess Foundation Prize for Arts Journalism and a Sydney Review of Books Emerging Critics Fellowship. He blogs at Infinite Patience (DanielDavisWood.com) and he also edits and writes for Splice, a small press and online review of adventurous, unconventional literature.