I Burn Paris by Bruno Jasieński 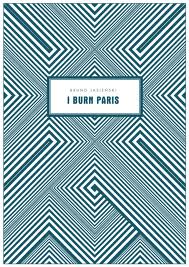 And it’s about time. For the economic and classist woes besieging Paris in the novel are equally prevalent today. Factories are closing, the gap between rich and poor widening, and thousands of honest workers discover themselves unemployed and overdebted, making I Burn Paris an accessible and relevant read despite the eighty years distance between author and reader.

But even today, the controversial politics of I Burn Paris could make readers uncomfortable. Banned by the French government “on the grounds that ‘it exuded blind and stupid hatred for Western European culture’” Jasieński’s novel erects a dozen political city-states within the walls of Paris, then mercilessly peels away layers of principle and morality until all that’s left is a pile of rotting corpses. And from these ashes, the ideal socialist commune is born.Even the title is shrouded in controversy. And ambiguity. Did Jasieński, as the translator suggests, really misunderstand Paul Morand’s usage of the idiomatic expression “I Burn Moscow” and was his novel his incendiary revenge? Or could he too be referencing speedy travels through capital cities? Even so. This second interpretation seems no less problematic when considering the speedy traveler is the bubonic plague — the ultimate non- respecter of persons — infecting the CEO and the factory worker with equal enthusiasm.

For besides the plague itself, which purges Paris of its brothels and jazz bands and other capitalist debaucheries (like a forest fire clearing the earth of rampant undergrowth so the seeds of a socialist utopia can be sown) there are very few heroes in the book. Only minor characters befriend starving orphans with truck rides and bananas or reject a multimillion dollar inheritance to organize factory protests or die trying to save a starving population without having to declare war or spread disease. But far as the main characters go, few elicit sympathy. None escape death. And all leave an equivocal impression on the reader.

A few examples for illustration purposes:

1. Pierre, a victim of mass-layoffs who consequently loses his home, his girlfriend, and his sanity, poisons Paris’s water supply and condemns the entire city to inevitable death.

2. P’an Tsiang-kuei, a starving orphan educated by Lazarist monks discovers Marx and becomes a high-ranking revolutionary who values principles more than life (including his own). But at least he is “buried with military honors” and his body, ironically exempted from cremation, “lay in state in the Pantheon.”

3. Captian Solomin. A taxi driver turned military hero in the White Army, who humiliates and murders a Russian Jew, discovers his dying brother among other Bolshevik prisoners and commits suicide. He too receives a hero’s burial with full military honors.

6. David Lingslay. An American tycoon with significant political power accepts Rabbi Eliezer ben Zvi’s bribe to sneak 3000 Jews out of Paris at the risk of bringing the plague to the US. But three hours from shore, he changes his mind and dispatches a telegram to sink the boat, saving an entire continent from ruin.

No one is a villain. No one is a hero. And every love is lost, which personal disappointment catalyzes the most drastic political actions. So really, Jasieński has written a love story — or a lack-of-love story — to fuel his pro-communist soapbox. And yet he, like the plague itself, deals fairly and equally with all his characters.

Except for the frequent metaphor that delights with language for language’s sake, and a futurist’s admiration for the man-made or the machine — a “dense herd of huffing, breathless automobiles battered against the low embankments of the sidewalks, ready to boil over at any moment” or the “dull, weepy bells” that “fought it out over the city with their fists of lead in their hollow bronze chests” the real energy in Jasieński’s text lies in the characters’ conversations. Between rabbis and tycoons. Between comrades who want war and comrades who want peace. Between professors and the revolutionaries who murdered their sons. Jasieński admirably illuminates multiple and antagonistic perspectives with equally compelling arguments. He can see all sides, and yet it is his beloved communism that wins at the end of the day.

Except in real life there are no winners. Real life is too fickle — Jasieński’s own life providing a perfect and tragic example. For even though Russia (where the first edition of I Burn Paris “sold out in a matter of days”) welcomed Jasieński post-publication as a political and literary hero, less than ten years later, he was expelled from the communist party, thrown in prison, and executed. Now, even his hometown of Klimontów, Poland has disowned him. The high school that once bore his name has been rechristened after a Roman-Catholic saint.

Bruno Jasieński (1901-1938) was a Polish poet, novelist, playwright, Futurist and Catastrophist with a fascinating life and history. Read his full bio at Twisted Spoon Press.