I Am a Very Productive Entrepreneur by Mathias Svalina 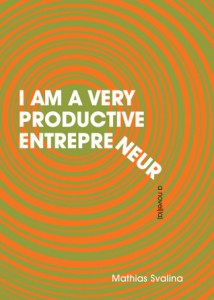 I am a Very Productive Entrepreneur is a book of “absurdist” (Svalina’s word) business plans.

But to call these plans “absurdist” seems to self-deprecate or to shy away from the very real, intense attention to sadness that many of these businesses attempt to alleviate.

I started this one business that retrofit memories to include pilot lights. Thereafter the memories stay lit … Even when your loved one has been dead for so long that the junk mail in his name has stopped arriving in the mailbox.

Or maybe that’s the point: to even attempt to filter or process or understand the loneliness, the terrible things that happen, is absurd. Sadness is absurd. It is outside of logic. Pulsing and parasitic, there is no way to manage it. Which is why each vignette in I.A.A.V.P.E. begins “I started a business…”—in the past tense perfective that suggests failure.

Always in this failure is a kind of hopeful sincerity:

I started this one business that employed generous looking, kind-hearted looking people to walk by you & smile warmly at the exact moment when all you can think about when you see a building is how tall it would have to be to ensure that the fall would kill you.

And while a collection of these might verge on the maudlin, Svalina’s bursts of non-salient language ensure this doesn’t happen: “Sunshine is a student at night.”; “I had a five-year-old son for a while but soon enough he became a red fist.”; “It is difficult to look at a rhinoceros and be proud of one’s couch.” Salience is meant to be helpful in the communication of ideas; it is how we supposedly understand metonymy; it is supposed to rescue us from being overwhelmed by choices and to quickly make meaning. But in these moments of surprising comparison, or of the gift of unexpected images (the business that puts padlocks on clouds), we the readers are left usefully adrift.

Over and over again in the book we read “I started this one business,” and while the repetition might make the “I”, as a narrative element, disappear into the solely imaginary, the narrator drifts in at opportune moments to ensure that we don’t lose the human impetus at work. One vignette begins:

I started this one business that installed rustic, old-fashioned stone wells inside people’s bodies.

And the narrator takes a moment to describe why:

I need the inside of a person to be as carefully considered as the outside… There are so many ways to shut the self off from the world. With this business I wanted to provide new ways of opening.

Many of these business plans seem to address similar goals: for instance, the question of identity. Take the business that does tours of people’s own neighborhoods:

What people want, it turns out…is to simply have the tour guide simply state who lives in each house & what the house looks like.

Alongside these kinds of businesses that accommodate a human need to be recognized, there is the business that places “enigmatic notes & to-do lists” to be found in used books.

The reason for the creation of these particular businesses seems to arise out of a desperation to be seen, to be recognized in the world and at the same time to make a connection to someone else. While the businesses are whimsical and born of serious attention to play, their foundation is grounded in a very real despair. So when I saw that Forbes linked to I.A.A.V.P.E. and quoted a section of the blurb that refers to it as diving into the “quixotic entrepreneurial spirit of American capitalism,” I laughed in despair. That nod mentions only the businesses–not the need that created their very existence.

But the narrator does, at times, interrogate and condemn this need. There is the company that covers everything in the world in gold, and when the gold runs out, the business’s technicians, “go out into the world & declare each thing not covered in gold paint to be beautiful.” There’s the business that builds skyscrapers in a person’s likeness.

What says I am somebody more than 70 stories of you among the old crust of stone & steel on the skyline.

Or the business “that found the exact middle between two things,” because “With no middle, there is nowhere from which one can perceive.”

In an interview at HMTL Giant, Svalina explained that I.A.A.V.P.E. “functions as a field rather than a progression.” This is an astute way of discussing the book without having to pin down its genre, which some have called a prose poem and others might opine as a treatise for the 100%. In the disciplines of mathematics and physics, there are “fields of potential.” A term I’m deliberately misreading to understand Svalina’s refusal to define the genre of I.A.A.V.P.E.; a way of misunderstanding a singularity: something (in this case, the form of the novel(la)) that doesn’t behave in the way expected. Yet in mathematics, singularity refers to the failure of a structure. Perhaps the failure to settle on a defined form of this book is a place of potential. Very much like how in the failure of these businesses we both delve deeper into the crevasse to interrogate our own needs and sometimes perceive a very real hope that even if they can’t be met, at least someone else has them too.

Mathias Svalina was born in Chicago. He is the author of I Am a Very Productive Entrepreneur (Mud Luscious Press, 2011) and Destruction Myth (Cleveland State University Poetry Center, 2009). He has also published numerous solo and collaboratively-written chapbooks, many of which were authored with Julia Cohen. With Zachary Schomburg, he co-edits Octopus Magazine and Octopus Books. He currently teaches writing and literature in Denver, Colorado.

Jess Stoner’s novel, I Have Blinded Myself Writing This (Short Flight/Long Drive Books, a division of Hobart), will be published in February 2012. Her choose-your-own adventure chapbook of poems, You’re Going to Die Jess Wigent (Fact-Simile), comes out later this summer. Her prose and poetry have appeared in Alice Blue Review, Everyday Genius, Caketrain, Juked, and many other handsome journals. Jess currently lives in the sweat and brisket of Austin.