How to Keep Your Volkswagen Alive by Christopher Boucher 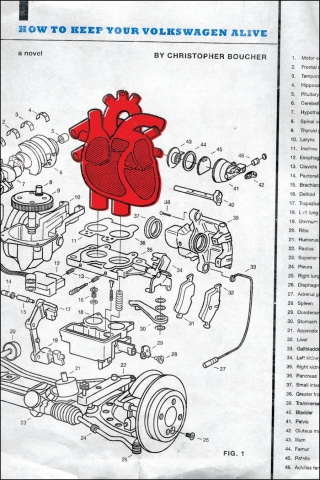 Beware! Things are not what they seem in Christopher Boucher’s How to Keep Your Volkswagen Alive, out this summer from Melville House. Within the pages of this quirky yet delightfully thoughtful novel, we have a Volkswagen that is not only a car but the narrator’s son, we have Trees that steal hearts, ovens that striptease, swordfish who work on cars, stories as fuel, and a raft of intriguing and extraordinary substitutions.

I use the word “substitution” on purpose, because one of the most fascinating aspects of Boucher’s novel is how it takes an already familiar word—like book or time or phrase, for example—and then uses it in the story to mean something else. Some of these substitutions are simply funny or clever, most are easy to swap once the reader gets the hang of what’s going on, like faith for anything sexual, time for money and power for book, but others, like, “I maytagged at the kitchen table,” or “This sounds treble,” are more illusive, yet these textual landmarks give the novel a real uniqueness and texture.

It would be easy to write about this book without providing any sense of its story or structure, simply because the wordplay and experimental feel of the writing tends to dominate. Yet there is a story, one that revolves around two large events in the narrator’s life: the death of his father (by a Heart Attack Tree who then escapes with an entire farm and goes into hiding) and the birth and death of his son, a 1971 Volkwagen Beetle. The father’s death precedes the son’s birth, and in a tricky twist of plot, the son’s death ends up preceding the father’s undeath.

Boucher’s narrative is self-consciously metatextual and, well, storyful; the narrator wants you, the reader, to remain aware that you are reading something that is being written both for the narrator and the narrator’s son, but also for you, and that what’s being written is a collection of experiences now crafted into “stories.” By transforming what has occurred into stories, he gives each of these moments a different kind of life. The transformative process is as important as the narrator’s ability to perform the conversion, and this works both within the storyworld of Volkswagen, because it comes to be a matter of life and death for both the narrator’s father and son, but it also reflects outward in the way the reader then experiences Boucher’s playfulness with language, imagery and metaphor. Here, for example:

Once my hand slipped while I was draining the sufferoil in my Volkswagen, and I was infected with the story of a Smith College student who drowned herself in a public fountain. It took twenty-four hours for that story to clear from my blood, and those hours were some of the most difficult I’d ever encountered—every word was a prison, every note the same.

Or, here, from one of two early chapters which give a series of clues as to how the reader should approach the entire novel:

As you read, though, keep an eye on the book’s combustion spark— that moment where the experience is separated, refracted, amplified. And if you ever lose it, or can’t spot it, just lift up the lines of type and look behind them—you’ll see something shivering, or something laughing, or something looking back at you and sticking out its tongue.

Readers are often divided where experimental literature is concerned—some avoid it, some crave it. What is great about How to Keep Your Volkswagen Alive is how well it straddles the experimental/conventional divide. On the one hand, by choosing to parody a How-To manual that actually existed, the now-legendary VW handbook by the same title, Boucher pokes fun of that era and the cliché structure of a How-To, yet that very structure is familiar and thus provides the reader with little handholds for navigating his otherwise language-rich, whimsical, and sometimes puzzling story. In each twist of metaphor, in each playful turn of the story and substituted word, a hint of deeper meaning then creates a game between the reader and the book. What is Boucher getting at? Is this supposed to be serious on some level? Or not at all?

That game makes for an engaged reading experience. Interestingly, sometimes Boucher’s extreme whimsy undermines a moment which seems to be striving for real poignancy. And so while taking up with the very serious subjects of birth and death and many more of life’s difficulties, Boucher’s particularly fanciful rendering of those moments lessens their grief and softens their sharpness. They almost always become grotesquely funny, still tragic, but in a fantastical, extraordinary way. Here, for example:

Five or ten minutes later, I pulled into the parking lot in my slow, rotten VeggieCar and found an empty patch of land, a bleeding hysterical Truck, a few Atkin’s employees huddled together and a pack of CityDogs pacing the ground with coffee mugs in their paws and cigarettes dangling from their lips.

I ran to the half-conscious Truck first and spoke with him as they loaded him into the ambulance. He mumbled a How to Use This Book of what had happened. I remembered he just kept apologizing over and over.

I held the Truck by his lapel. “Is he alive?” I begged.

“His chest was…split,” said the Truck, spitting a mouthful of blood onto the street.

“Were there any stories in his eyes? Any stories at all?”

Maybe my father heard the Tree breathing, or noticed his shadow, and maybe he looked up to see the Tree salivating at the window. Before he could move or do anything, though, the Tree attacked—slamming his fist through the glass and into my father’s chest and pulling all of the stories out of his heart.

You see? This is the reason I’d stopped booking: I didn’t, couldn’t, understand this machine—the system of parts and action that was Western Massachusetts. It seemed far too big, and it had shown me too many conflicting things. How could the same place pave the roads that brought me to my family and Atkin’s Farm and pave the roads that allowed the Tree to deheart my father? Who even knew that there were such things as trees that fed on stories, or that would kill an innocent man for a meal? No one did, because the rules kept changing and changing back, with no warning. How could I be expected to navigate such a place?

But then again, transformation is the point. In one sense, How to Keep Your Volkswagen Alive is about inventing ways to tell sad stories about tragic moments that will then help us—the reader, the writer, whomever—to find ways outside of them. This is denying the book’s overriding silliness to some measure, but I think that combination of silly and solemn is exactly what gives Boucher’s novel the ability to drive up off the page and into the depths of our literary garage hearts.

Christopher Boucher received his MFA in Fiction from Syracuse University, where he studied with George Saunders and Junot Díaz. Before moving to Syracuse, he worked as the Arts and Entertainment Writer for The Daily Hampshire Gazette, and drove (when it started) a 1971 Volkswagen Beetle. He currently teaches writing and literature at Boston College, and is the managing editor of Post Road Magazine. In his free time, he plays banjo in a bluegrass band.

Michelle Bailat-Jones is a writer and translator living in Switzerland. Her fiction, translations and reviews have appeared or are forthcoming in various journals, including Ascent, The Kenyon Review, Xenith, Hayden’s Ferry Review, Atticus Review, The Quarterly Conversation, Cerise Press and Fogged Clarity. She is the Reviews Editor here at Necessary Fiction.