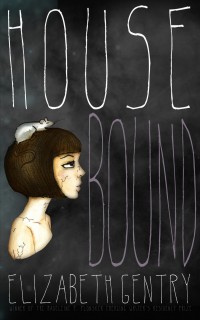 This distinctive and atmospheric novel begins on a note of suspended animation:

With the radio dusty and their records scratched and worn, they perched on the ends of straight-backed chairs reading as if with peripheral vision engaged, shoulders tensed against an encroachment of space unlikely to occur.

“They” are a peculiar family—nine children, two parents—living in a large house on the outskirts of a small city. In many respects, they are an experiment, a utopia created by the parents according to very specific rules. The greatest of which is their near complete isolation from anyone else excepting a weekly trip to the library. This excludes the father who works every day in the city—and his difference from the rest of the family is an important element of Gentry’s narrative structure. Now, if this house and family is a utopia, it is one without a moving force; it has turned inward and become frozen. And even when the story’s action begins with Maggie, the oldest child, deciding to leave the family and take a job in town, this feeling of being perched and poised continues. As Maggie begins her preparations for leaving and, suddenly relieved of her role as child-minder for the first time, begins to wander about the property and visit the neighbors, there is a sense of the family holding its breath. And this psychological stillness begs the question—what is everyone waiting for? That tension stretches on, and gently but powerfully becomes the novel’s focus.

Interestingly, the geographical location of this fictional world is irrelevant, even while Gentry makes much of the notion of personal geography. In fact, the book is very much a mapping of personal and emotional boundaries as the characters move amongst each other in a defined location. And the role of memory becomes important as Maggie (who is the novel’s main character, even if there are short moments of focus on her siblings and parents) re-visits the places she has not been to in so long that she ended up taking them as scenes from books or from stories told to her, instead of events she once witnessed or experienced herself. Like here, in the following scene, when she comes upon her grandfather in a farmhouse not far from her own house:

Boots pounding the dirt, Maggie breathed deeply the fragrance buried in the bark of the trees and without effort began picturing an old man’s hands curling cedar beneath his pocket knife as he shaped the wood into a serving spoon. The image stayed with her until finally she emerged from the forest into the grassy front yard of the farmhouse, where she indeed saw such a man sitting in a lawn chair, shaving wood with a pocket knife. He looked up when he heard her approach, stared a moment from beneath his straw hat as if appraising her, then resumed whittling. She recognized the man from the book she had read as a child, the same book she asked the librarian about the day before.

This memory loss also raises a question—how is one to have a future when one’s past has been erased in this way? This is an unsettling dilemma, and indeed, the overall feeling in Housebound is of being unsettled. Gentry is extremely skilled at creating a mood of uneasiness, of a vague unspeakable magic and small hidden cruelties. In this way, Housebound resounds with wonderful echoes of the writing of Barbara Comyns. The tensely pastoral imagery and the novel’s feeling of suspended animation made me think of both Who Was Changed and Who Was Dead and The Juniper Tree, while the tightly controlled family dynamic was reminiscent of the petty brutality in The Vet’s Daughter.

I want to make it clear, however, that Housebound isn’t unoriginal; the world that Gentry has created is unique in its psychology and filled with startling perceptions and curious insights. Perhaps it is because Gentry, like Comyns, maintains a narrative that continually verges on fairytale, inciting the reader to wonder when the hidden horrors might suddenly make their appearance. Everyone that Maggie comes across, even her siblings and parents, seem to harbor some small seed of cruelty, regardless of whether they choose to wield it over Maggie or over each other.

With respect to this feeling of uneasiness and its fairytale mood, Gentry takes a singular risk in Housebound and that is to eventually make concrete all that appears at first to be vague and undefined. In some ways it isn’t easy for the reader to make this leap from hints to certainty—it does somewhat break the novel’s dream-like state. Without giving too much away—the family is waiting for something to happen, for a certain understanding to come upon them. Maggie’s decision to leave is also a decision to puncture a bubble of blind acceptance that has grown dangerously overstretched among these eleven people, to question the rightness of the utopia and most specifically, to examine the founders of that utopia. The revelations that follow speak of a hidden trauma and a life spent in denial—the repercussions of which have trickled down through each and every member of the family.

The exceptional accomplishment of Housebound, however, is how it takes the novel’s revelations and turns them into the seeds of the family’s healing. Not through some easy or cheap emotional trick—in fact the path opened up for the characters is quite daunting, quite horrible—but in the way Gentry investigates each character’s complicated reaction, how particular these reactions turn out to be, how delicate and horrible and real they all feel. And Gentry elevates these moments with a language that is somehow a little awkward but still quite beautiful and easily understandable:

They would have to be patient with one another as they felt their way along this new terrain, harbored in unknown territory where language might be allowed, unable to move freely until fluent. For they had all begun a struggle over what to say and what not to say, when to say it and in what way and to whom. Maggie knew they would do so badly and in spite of themselves, hoping others would listen past the details for the origin of stories, occurring once and repeatedly across the limitless span of time.

Language that invites you to read and re-read, to look for hidden meanings and unexpected discoveries. Language that celebrates all that is complex and resists any movement toward fixed and trite resolutions.

Elizabeth Gentry won the 2012 Madeleine P. Plonsker Emerging Writer’s Residency Prize with Housebound. Gentry has an MFA from the University of North Carolina at Greensboro. Originally from Asheville, North Carolina, she has lived in Knoxville, Tennessee, for twelve years. She currently works as Writing Specialist for the UT College of Law and teaches writing and literature for the University English Department.

Michelle Bailat-Jones is a writer and translator living in Switzerland. Her fiction, translations and reviews have appeared in various journals, including The Kenyon Review, Hayden’s Ferry Review, The Quarterly Conversation, Cerise Press and PANK. Her translation of Beauty on Earth, a novel by the Swiss author C.F. Ramuz was published in 2013 by Onesuch Press. She is the Reviews Editor here at Necessary Fiction.
Share This