Her 37th Year, an Index by Suzanne Scanlon 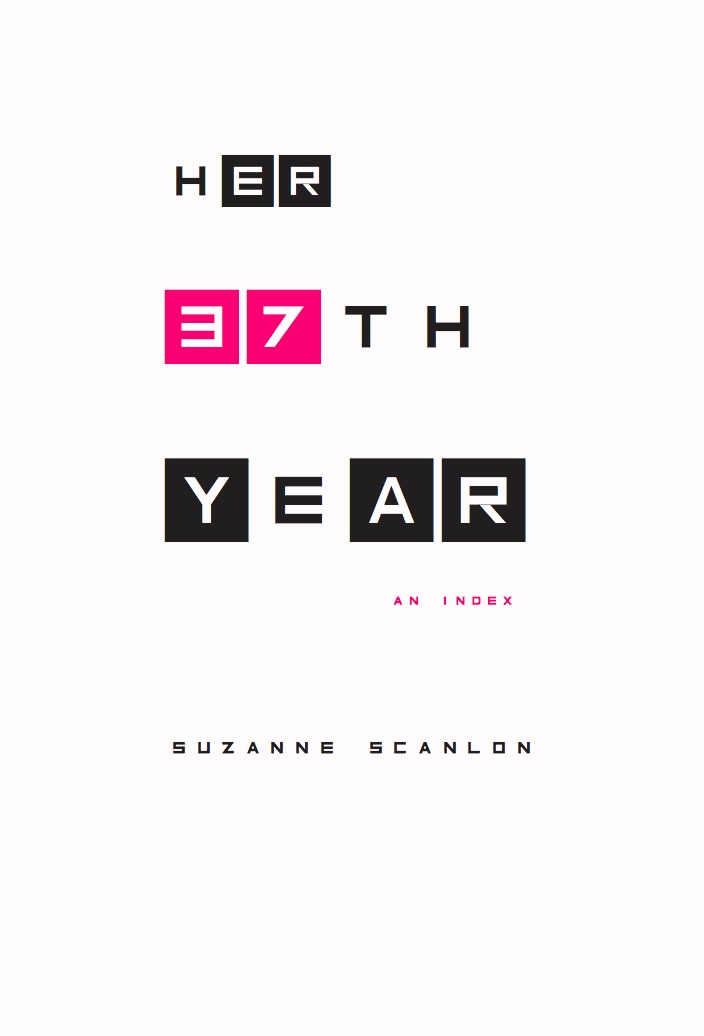 When I was a kid, I loved reading scripts for plays. I loved reading detailed scene expositions and character descriptions. I loved the hints for how to read a line. Slowly. Abruptly. Whispering. With warmth. With fear. With apprehension. An aside. An interruption. An insinuation. I loved these parenthetically contained words, these descriptive little ghosts of lines unspoken. I felt like the truth of a play could be felt in between parentheses, in these embedded thoughts, this hidden lexicon.

In addition to being a writer, Suzanne Scanlon is a professional actress. Her latest book, Her 37th Year, an Index, employs a highly constrained medium — the index — to embody her frustrations as a female writer. Her index functions as a kind of silent script, composed of unspoken, parenthetical instructions. Scanlon’s text is a beautiful self-contradiction. The index comes complete with definitions, footnotes, and “see also” citations, everything except the story that is indexed. Much like the parenthetical line notes in plays, her narrative is described by the index itself, through layer upon layer of references. The index reveals its own story, with the master text removed, deconstructing her piece as an example of écriture féminine.

It’s difficult to quote from this book in the context of a review. So much of what matters is already quoted by Scanlon. Nevertheless, I feel like the book’s definition for “Feminaissance” is some kind of compendium for Her 37th Year, an Index:

Feminaissance (see also: Kraus, Chris; and Écriture féminine), in which Kraus writes: “There is always too much feeling in female writing, but feeling itself isn’t the point. It is intellectual vaudeville. It arrives at the moment of feeling, then leaves. It demonstrates something: itself.”

The emotiveness of Scanlon’s text is in constant conflict with its indexed form. These definitions allow just enough space to “[arrive] at the moment of feeling, then [leave].” By writing in spaces too brief and specific to fully flow together, Scanlon creates a sense of distance, sets the stage for an “intellectual vaudeville.” As a reader, I experienced a desperation, a need to be absorbed into her narrative.

Admittedly, I was not absorbed by the first few sections. The index is grouped into alphabetized chapters, and I wasn’t engaged until somewhere in section “C”. I was too focused on the words themselves, too intent on assembling puzzles. I didn’t feel involved until I allowed that the words become lost in their own definitions. That, or the words are implicit in their definitions, with no meaning (or, at least, no narrative) without. For example:

Here, again, she “arrives at the moment of feeling” and leaves the reader longing for what is not revealed.

The remarkable thing about Scanlon’s text is that her voice, her wit, and her insight resonate even through this highly structured form. She seeps into the book over time, as the reader begins to appreciate patterns. The definition of Duras, Marguerite is recalled in the definitions of Leek Soup, Oblivion, Soup, and Suicide. All of these definitions reference Duras’s quote: “You can want to do nothing and then decide instead to do this: make leek broth. Between the will to do something and the will to do nothing is a thin, unchanging line: suicide.” In Oblivion, she applies this quote to anecdotes about reading an essay by Donald Justice assigned by a beloved teacher. In Suicide, she writes about her response to a friend’s confession that grading papers makes him “suicidal.” “I get it,” she tells him. “Duras once linked the making of soup to suicide.”

This book is not the fragmented, disjointed experiment a less empathetic writer might have written; it is a text brimming with stories — both told and suggested — all beautifully channeled into one another.

This is not to suggest, however, that this “channeling” appears through a neat, perfectly consistent process. Much of the beauty in Scanlon’s text comes from its interruptions, its subtle interrogations of the index form. A number of words are strategically divested of their definitions. For example, the aforementioned Leek Soup simply reads, “see also: Duras, Marguerite, and Suicide.” Most notably, the definition which comprises all of chapter Q reads:

The book otherwise contains no mention — let alone a definition of — Hysteria.

Numerous footnotes also perform as interruptions to the institution of Scanlon’s index. Lengthy subtexts, side stories, entire conversations are divulged in these miniature underworlds. She reminds us that while this text may be beautifully organized, it is not an organization which emerged organically. One wonders, what is being covered up? Why is this here? Where will this current ultimately lead?

Near the very end of the book — in chapter V — Scanlon’s confession of desire erupts from the netherworld of footnotes into a passionate, unrestrained definition:

Volvo (see also: Our Teacher) Do you remember how I came alive in the back of your Volvo the constraints of the space allowing freedom how I shrieked and wept the seat belt latch sharp in my left buttock you licking my clit the anticipation of a car slowing down. Let’s christen it you said. I flinched. And you sighed and I said fine then okay show me and there we were before I knew what or how first my face on the floor next to your mouth on my clit the sharp latch again you are so wet you said and when I came you said again come again and I came again. This is how you christen it? I said my leg over your shoulder now and Yes this is how you said Yes my hands in your hair wanting to something but your face gone now yes this is Christ.

Scanlon masterfully inhabits the breaths between her lines. She deftly orchestrates these under-surface rhythms, molds each breath, each hidden word into a note or definition. She writes herself so well the reader early on forgets to ask which parts are indexed by author, narrator, or actress. These roles bleed into one another seamlessly until Scanlon lets the seams unravel, lets us feel where she is bleeding.

In a definition of Real, The, one of Scanlon’s admirers asks how she manages to create a “crazy sounding” voice without “really” sounding crazy. Easy: Just be a woman, an actress attempting to organize all that which cannot be organized.

Suzanne Scanlon is also the author of Promising Young Women (Dorothy, 2012). She lives in Chicago.

Meghan Lamb lives with her husband in St. Louis. Her work can be found in The Collagist, Pank, Necessary Fiction, wigleaf, and other places.