Have Fun In Burma by Rosalie Metro 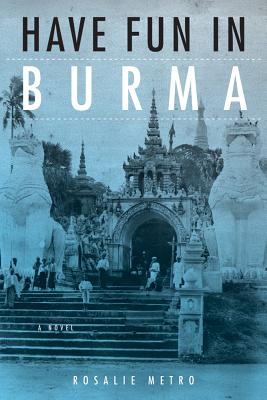 Adela Frost is the millennial you love to hate. The eighteen-year-old recent high school graduate has one eye on the thing she’s doing and the other on how doing it will seem on Facebook. Life for Adela, in the early chapters of Rosalie Metro’s debut novel, Have Fun in Burma, is more a performance for others than an experience to savor. Then there’s the fact that even by American standards, Adela is privileged. Her high school is elite and her “hard won” spot at Pomona College awaits her, no matter how much fun she has or does not have in Burma/Myanmar. This is not the kind of character who can easily inspire empathy in the hearts of readers.

Yet she does. As if aware of this risk, Metro adeptly shows us Adela’s world through her eyes. Though perhaps ignorant of the complicated nature of the long-simmering mutual animosity between Buddhists and Muslims (animosity that sometimes turns violent), Adela is not insensitive to it, and it’s easy to forgive her for being a little too trusting in the ability of groups to follow rational arguments away from hatred.

The premise is this: Adela, having been dumped by her intellectual boyfriend Greg, finds herself without plans for the summer, so she applies to participate in the Myanmar Volunteers United program. It’s a “voluntourism” opportunity that would put her in a monastery in Myanmar, working with monks and children. She feels spiritually drawn to the place, though in keeping with the millennial stereotype, she spends plenty of time imagining how her blog about it will seem to folks back home.

Throughout this novel, Adela’s blog is an opportunity for us to see how she processes culture shock. She’s still writing an assignment for the high school she’s left behind, an essay on unreliable narration in George Orwell’s Burmese Days. On her blog, she writes, “The main character, Flory, who is obviously based on Orwell himself, is spineless and self-obsessed.” (Bold is original; Metro uses bold to indicate a blogpost.) Adela’s failure to recognize self-obsession in herself is an early indication that she has a lot of growing up to do.

The challenge for Metro is to make Adela more than just a vehicle for her own vast knowledge of Burma. Metro is an anthropologist of education who has been studying Burma/Myanmar for nearly two decades; the novel risks becoming less a bildungsroman than a primer on the conflict between Muslims and Buddhists. In the first half of the novel, Metro does lay a lot of groundwork for the reader’s understanding of the situation in Myanmar/Burma. This groundwork is done through conversations Adela has with the monks she teaches and with Daw Pancavati, a spiritually-grounded mother figure who offers advice and sometimes comfort to Adela when she feels adrift in a strange place. We learn as Adela learns. Yet the prose really shines when Metro drops nuggets of insight into Adela’s character that have nothing to do with her status as an American in a foreign country. Here, she writes about Adela and her friend Lena:

She turned over her hand to look at the scar on her wrist. She and Lena, under the influence of Lena’s depressive sophomore year boyfriend, had gone through a brief phase in which they’d cut themselves with safety razors. Adela had done it only half-heartedly, in solidarity with Lena, but one time she’d cut too deeply, glimpsing some fatty yellow goo under her skin before blood gushed forth. This brief vista into her own body had alarmed her, and she’d never cut herself again.

Here we see Adela without Burma in the background. She is just a teenager here, searching for a way to ease some nameless discomfort and falling under the influence of the wrong person. Though we may not all resort to cutting, we can easily imagine ourselves in her place. Here she becomes human.

While in Burma, Adela finds herself drawn to a young man named Thiha. They begin a relationship that must exist in secret for reasons Adela discovers late in the novel. At first, the sex seems satisfying to Adela, but there is a part of Thiha’s life that Adela neither understands nor has the sense to ask about. She knows that Thiha spent time in prison for his participation in the Saffron Revolution, a protest against the government’s ending of fuel subsidies that resulted in a jump in the price of gasoline. He’s only a few years older than Adela, but has lived through much greater hardship and his past often asserts itself during their private moments together, as in this moment after kissing on the dirty floor of an office:

They were quiet for a long while. He rested his head on his knees, and she thought he might have gone to sleep.

He shook his head, not looking at her.

“Nothing’s going to happen,” she said, answering for him, trying to convince both of them. “I’m going back to America and you’re going to Singapore, and Buddhists and Muslims are going to keep killing each other.”

Their relationship, despite Adela’s best efforts, could not transcend the cultural boundaries. In the end, Adela “felt how impersonal it was, how their lust had nothing to do with either of them. They were just bodies, sealed bags of skin filled with unattractive things.” Their relationship is, in many ways, a reflection of Adela’s relationship with the culture.

Eventually, under unwelcome circumstances, Adela returns to the United States. Readjustment is a struggle. She begins meditating to cope. She describes her sins in Buddhist terms: she did not “refrain from harming living beings” or “refrain from taking what is not freely given _or _refrain from sexual misconduct.” Perhaps the most important growth point for Adela is her acknowledgement that she did not “refrain from taking intoxicants which dull the mind” — the intoxicant here being vanity-driven use of Facebook. Her regret on this point is the most redemptive. She may be eighteen years old, but she’s no longer a millennial in spirit.

Adela suffers. It’s part of growing up. We get the sense that she will learn from this experience and suffer nothing greater than deep remorse. Americans like Adela have that luxury. As portrayed in this novel, those native to Burma do not. In this way, _Have Fun in Burma _is about American privilege — its blinders and who wears them, its costs and who pays. The book avoids becoming merely a vehicle for a lesson on the Muslim/Buddhist conflict or Burma. As Adela suffers, we see that even suffering in certain ways is a privilege. It makes one wonder: How am I suffering? How bad is it, really? How lucky am I?

Rosalie Metro is an anthropologist of education who has been researching Burma/Myanmar since 2000. She holds a PhD from Cornell University, and she is currently an assistant teaching professor in the College of Education at the University of Missouri-Columbia.

Peter Biello (peterbiello.com) is the founder of the non-profit Burlington Writers Workshop. He hosts All Things Considered and The Bookshelf from NHPR on New Hampshire Public Radio and has been published in Gargoyle, Lowestoft Chronicle, and other journals. He holds an MFA in fiction from the University of North Carolina at Wilmington and a BFA in creative writing from the University of Maine at Farmington. On twitter: @peterbiello.