Goodnight Nobody by Ethel Rohan 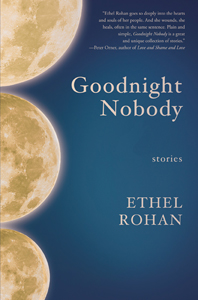 Ethel Rohan’s story collection, Goodnight Nobody, is a compelling set of stories from an Irish writer who captures the essence of ordinary moments and infuses them with a quiet sense of importance. The characters who populate the thirty stories in the collection span both of Rohan’s worlds; the Ireland of her early life, and the America of her more recent years. As these short, robust tales unfold, the characters experience love, loss, disconnection, pain, and epiphany. It is Rohan’s ability to create truthful, painful, and believable characters in all her stories’ geographies that leaves a lasting impression on the reader.

From the opening story, “Major Drill,” to the closing, “Someplace Better,” there’s a surefootedness to the writing that speaks to Rohan’s place as one of Ireland’s most promising US-Based writers. The first lines of “Major Drill” set the tone for what’s to come:

Dad wiped the blot of ketchup from the corner of his mouth.
A vein of red stayed, coloring the crease down the side of his jaw.
Mam returned to the cooker and spooned the last of the fried
onions onto my plate. The trace of burnt oil hung in the air. My
sisters sat opposite me, arguing over a magazine and pulling on
its ends. Dad snatched the glossy and tossed it across the kitchen.

The details the narrator provides here bring the reader into the frame of the story, as if they were viewing a painting in a gallery at close quarters. It is the “vein of red,” and the “trace of burnt oil,” that shows Rohan’s deft touch as she fleshes out her brief, yet densely-packed narratives, with such flourishes.

Rohan delves into the unspoken territory of the Irish social fabric in “Out of the Wreckage.” The reader learns how, “By lunchtime, Stella’s cheek had swollen and remained pink with her mother’s handprint.” The conflict between mother and daughter is exquisitely drawn, showing the father, silenced in the background, and Stella longing for escape, but afraid to abandon her father to the brutality of her mother. Rohan delivers the story in simple, pragmatic sentences, and consistently finds the perfect pitch ending, particularly in “Out of the Wreckage,” as Stella prostrates herself on the floor of the garden shed, and “hugged the unfinished rocket harder to her body and hoped maybe, just maybe, it would make it into the sky.”

In “Bee Killer,” Rohan works in surreal territory and touches on the human body as a source of interest. “Bee Killer” opens with a woman discovering a foreign object in her ankle:

The mri revealed the source of the pain and limp in my left
foot: a hair caught deep in the tissue around my anklebone.
Likely a dog’s hair, the doctor said. One in a million chances
a tiny hair could cause such trouble, he added. The cords in
his neck made me think of blue-black liquorice vines. After the
surgery, the doctor confirmed what I’d suspected all along—the
supposed hair was in fact the leg of an insect, a bee.

And by story’s end Rohan’s narrator herself tells us how,

I jumped to my feet and started dancing, my arms raised over my head, clap, clap, and my butt shaking. My husband turned around in the doorway. I shimmied and twirled and waggled, searching beyond the black net of his mask, watching for any sign that he understood.

The way both bees and narrator mirror each other in the dance is a wonderful juxtaposition.

Rohan returns to the world of the anthropomorphic in the story, “Sweet Pea,” in which the narrator has a wing in place of an arm. The reader is told how, “Not too many in Ireland in 1969 born that way, not the world over either, to the best of my knowledge.” The suggestion that “Not too many” were born with winged limbs allows for the reader to speculate on a whole sub-culture, or tribe, of one-armed, one winged individuals peppering the towns and villages of Ireland. Again and again in these stories, Rohan ends them with such surefootedness, and particularly in “Sweet Pea,” as the narrator explains,

Betty’s crossed eyes brought to mind shattered glass and they seemed about to fall out of her. We looked like a statue together, like something a great sculptor would give her whole life to create.

Another stand-out is “Out of the Ashes,” in which thirteen-year-old Esther’s grandfather self combusts in front of the television. This short, simple story of loss and pain is reminiscent of Jeanne Leiby’s wonderful story, “Viking Burial,” and Rohan’s story again closes with another fantastic scene, where Esther is in the car with her family:

The car motored along, the engine like the hum of a thousand
whispers. Esther’s insides turned cold with fear. Maybe her
granddad’s death was because of something to do with the devil.
Esther pictured her granddad, searching the memory of his bright
eyes and wrinkled face for any signs of evil. She glanced across
the backseat at her little brother, his eyes and face shrunken with
worry. Her ma’s too, and her da’s in the rearview. Then, as if in
response to some unseen signal, Esther and her family opened
the four car windows. The others, like Esther, must have felt the
sun’s burn.

There is no doubt Rohan shines among her peers with her blend of fabulism and gritty reality, and particularly in how she takes some of the small, private moments of life, such as driving home from Mass, and infuses those narrative spaces with deeper meaning. This is a testament to her ability to construct at the sentence level these powerful moments where more is going on than the reader might at first realize. One of these moments is when Esther “Glanced across the backseat at her little brother, his eyes and face shrunken with worry.” There’s a transfer of energy that takes place between Esther and her family, in this seemingly ordinary moment, one that results in a physical shift in everyone’s sensibility. This is Rohan’s genius, the weight of the narrative moment so finely balanced.

Ethel Rohan was born and raised in Dublin, Ireland. Her first story collection Cut Through the Bone was longlisted for the 2010 Story Prize. She is also the author of the chapbook, Hard to Say (2011). Her work has appeared in The New York Times, World Literature Today, Tin House Online, Sou’wester, Post Road Magazine, and_ The Rumpus,_ among many other publications. She received her MFA from Mills College, CA, and is a reviewer for New York Journal of Books and a member of the San Francisco Writers’ Grotto and PEN America. Visit her at ethelrohan.com.

James Claffey hails from County Westmeath, Ireland, and lives on an avocado ranch in Carpinteria, CA, with his wife, the writer and artist, Maureen Foley, their daughter, Maisie, and an Australian cattle-dog, Rua. He has a son, Simon, who lives with his mom in San Diego. Blood a Cold Blue is his first story collection.