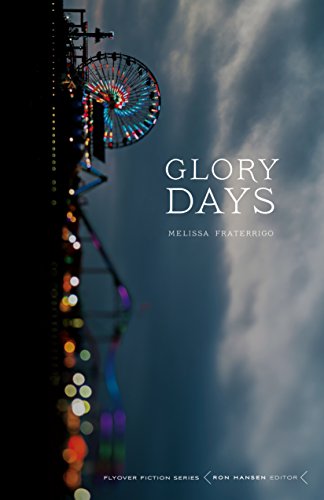 Language and imagery of great originality are the most striking aspects of Melissa Fraterrigo’s Glory Days. Centered on the imaginary town of Ingleside, Nebraska, as it undergoes disruption and transition, the novel illuminates the broken lives that result from being cut off from the land and the once-vibrant farming and ranching culture that formed the town’s connective tissue. This past is not presented directly; the reader gleans it from vivid shards of description, a kind of fractured mosaic: “corn pollen still thicks the air with its fertile rotting … the land was broken by rows of houses.”

Glory Days is a loosely structured novel-in-stories, many of which have appeared in various literary journals. While several stand alone, those near the end of the book provide a novelistic sense of closure, and a longing for connection links all the characters. The book opens with one of the most affecting stories, “Ghosts,” centered on the two primary characters, Luann and her father Teensy, just after the death of his wife and the loss of their ranch. Luann is the adoptive daughter of Teensy and his wife. Teensy, overcome with grief, either sees the ghost of his wife or is falling into madness. Luann wants to believe in the ghost of her mother but tries to keep her father tethered to reality. In further stories, Luann, left with her grandmother (Teensy, no longer able to ranch, gets a job as a long-distance truck driver), finds solace by sleeping around with all the men in town, and eventually becomes seduced by the sociopath Footer. These tragedies cartwheel into yet others that eventually ruin Luann and come close to destroying Teensy as well.

Without an overarching plot to rely on for momentum, Fraterrigo provides tension through a looming sense of danger, threat, and violence in many of the stories. Others are drenched in mournfulness and despair (absent parents, estranged children). But the bleakness is offset by the beauty of Fraterrigo’s language and precise images. She employs both lyrical realism (in descriptions of nature) and the magic realism of ghosts, visions, and the afterlife, conjured from the characters’ longing for connection and escape from the lives they are trapped in. In “Fredonia the Great,” Fredonia, who works at the Glory Days amusement park, experiences the deaths of those on whom she lays hands. Her husband Borlan, a welder who also works there, has pressured her to tell him of his death, and she finally agrees:

I straddled him. My hair flowed over my shoulders like a cape. I placed my hand palm down on his chest, could feel my eyes rolling back while the rest of me remained steady. I saw the sky, a deep cerulean blue, and I was Borlen atop the steep structure of a roller coaster. The wind coursed against the scruff of his neck as he bent over a metal beam…blue sparks shimmered in a generous arc on either side of him. … There was a blast of pain at the base of his neck. An errant beam had loosened from above him and swung away, and Borlan toppled head first over the steel skeleton. … Wind cupped his body as he fell.

The title story is one of the most remarkable, told from the afterlife in the point of view of a murdered boy:

…the river is a thick and unmoving as cake batter. Carp was up on the banks. Jeremiah knows that if he were still alive, he would spend his days poking their sickly, motionless bodies with the end of a stick. But first he would explore the shore in search of the ones whose gills continued to flap, and then he’d push these fish back into the river, wait to see if waves trickled the surface or if their bodies floated up.

In her sensory language and descriptions, Fraterrigo’s choices are distinctive and evocative, whether of characters, action, or landscape:

He smells of hot dogs and the metal handrails that mark the perimeter of rides.

…the gummed meat of his face and husked brows.

[they] suck marrow from bones. She can almost taste the gamy grease, its deep-rooted flavor.

Everything was drying, dropping, fading away. … it blazed up in her a remembering for how the thistle and alfalfa would go gray with the first frost. Heads on the clover would shrivel and droop, but in the morning steam would rise from the ground and the breath of each cow would be visible.

Fraterrigo gives the reader little in the way of redemption or relief until the final story, “Chains,” where Teensy is once again working with animals and in nature. (Gardner, who became rich by selling his ranch to the developers of the Glory Days amusement park, in “Teensy’s Daughter” leaves his estate to Teensy out of guilt over his role in Luann’s death.) At just four pages, the story is a revelation, depicting an exquisite moment of grace as Teensy delivers a calf:

I restrain her in a halter, tie the tail up and to the side, then rewash my hands and scrub her back end with soap, rinsing the area with fresh water and patting her dry with paper towels. I get the chains and soap them good. … I put on fresh gloves and push firm to get inside the heifer’s rear, then loop each chain around the front legs and above the hooves. … One hipbone goes through and then the other, and the calf slides out in a steamy wet black blob. My heart hums full and bright.

After this euphoric moment, Teensy sees coming toward him the grandson he’s never known, asking for his mother Luann. Whether we are to understand this as a vision that brings Teensy joy, or as a real person, is unimportant. Either way, the moment is a perfect epiphany for the novel and the reader.

Melissa Fraterrigo is the founder and executive director of the Lafayette Writers’ Studio in Lafayette, Indiana. She is the author of a collection of short fiction, The Longest Pregnancy.

Céline Keating is the editor of the anthology On Montauk: A Literary Celebration (2016) and the author of Layla (2011), Play for Me (2015), and short fiction in many literary journals. Her website is www.celinekeating.com.