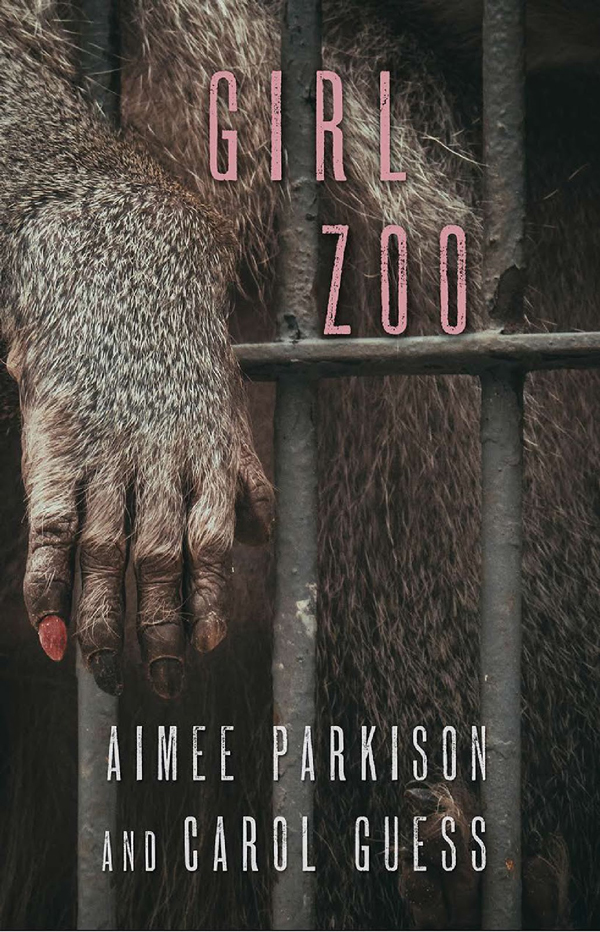 Confinement in plain sight is a process of breaking a thing apart and watching it die. The panopticon of sexism and male gaze riots in Aimee Parkison and Carol Guess’s book, Girl Zoo. But it is beyond mere seeing, it’s the speculative bending reality, it’s the text becoming its own confinement. The book is split into around 50 flash fictions all writhing and connecting into each other. Each story focuses on a subject in captivity while Parkison and Guess’s narrator straddles the breakage between being one woman and every woman. The text grapples with the means of telling. Throughout, narration varies, taking on unconventional voices and structures. In “Girl in One-Act Play” notably, and in other instances throughout the text, the story ends with lighting. The strike of the end splits a reader straight down the middle, left smoking, black, and burning: almost as if the confinement has fallen, the clarity comes and nothing is left but open air.

Upon first read, the text is quick, punchy, says what the hell it needs to say and gets out. It’s truly a masterclass on the clinch- grab- run approach, but it isn’t that simple. Starting at “Girl In Knots” Parkison and Guess, in utilizing footnotes, create a split in the narration, staggering the reader with either scanning between the footnotes, or reading them all as they are listed later on. Either way, the content in the footnotes runs between either being extra narration, or later on, a complete dissection of the existing narrative. This tool confines a text within a text. “Girl In Pink Flower” reinvents this tool into a means of supplying information, which I am beyond hesitant to call straight forward. In reality, nothing in this book is completely straight forward as a conventional collection might. Occasionally, in the aforementioned “Girl in One-Act Play,” Parkison and Guess leave the reader wondering until turning everything on its head. This alone carves the importance of this text into my mind, because it fights to be listened to until listening is not enough.

The themes radiating through the text are like long, bright red threads. Early on in the book, Parkison and Guess begin with the term “zoochosis,” the stereotypical behavior of animals when in captivity, as a means to describe the position of women in a similar captivity. This is the titular concept within this collection. The women in this book are, as the authors explain, are in a Girl Zoo experiment, or a dollhouse where they live in plastic boxes, or a girl in a hot car, or a girl in a clock. The lives are contiguous and yet discontiguous. They are rioting inside each other, beating against the confines of the structure with everything they can.

Gaze stuns in its inclusion. There are men in this book and they serve as reminders that zoochosis is impossible without viewers and a zookeeper. Perhaps, as the book elucidates in blips, the viewer is the reader, the consumer of art. “Why are you surprised by this?” the authors write, “why do you read this as fiction?” And later on: “Our bodies are objects of art, not personal but cultural, and therefore no longer our own.” Girl Zoo takes the men and sets them as above the subject, as patients in twisted medical settings, as both the viewer and the enactor of violence— as seen in the various mentions of sexual violence.

Girl Zoo attacks the strange with stunning clarity. Occasionally, the text will feel uncertain, shaky almost in its positioning, but through the brief moments in the progression of the story, the purpose becomes clear. This experience of clarity with expansion highlighted the reading of this book. At first, the strange gives way to a feeling of whimsy. Then, as the pages turn, even in the first piece, Parkison and Guess lean into the speculative and strange with force. This style has a quick learning curve, to the point where, after reading a few of the stories, the idea of dogs in drywall or the structural twist of using footnotes becomes something that isn’t all that strange at all. This is likely because the themes of the book strike at a strangeness far higher than the basic shock value. Story to story instances of “mundane” strangeness— which is so different than the structural, unavoidable strangeness of oppressive structures— start to peel away at the larger message.

Girl Zoo is exposing contradictions at a higher level than it ever could with mere description or subversion. Parkison and Guess attack the political with the speculative. The book burns hot for the entirety of its read-time, and ultimately, leaves the reader with a puzzling-yet-fitting finish. The confinement doesn’t end, but is given the opportunity to end at a cost. Parkison and Guess have produced an enthralling read that lends itself to teaching the power of attention to every word, sentence, and paragraph. But this is not just fiction. This is a viewing of the act society always performs: watching, from the watchtower, until the zoochosis kicks in. But they’ve struck at it, made us aware. We have a way out.

Aimee Parkison is the author of the novel The Petals of Your Eyes (Starcherone/Dzanc 2014) and two story collections, Woman with Dark Horses (Starcherone 2004) and The Innocent Party, (BOA Editions, Ltd., American Reader Series 2012). Parkison’s fiction has won numerous awards and fellowships, including a Christopher Isherwood Fellowship, the Kurt Vonnegut Prize from North American Review, the Starcherone Prize for Innovative Fiction, the Jack Dyer Prize from Crab Orchard Review, a North Carolina Arts Council Fellowship, a Writers at Work Fellowship, a Puffin Foundation Fellowship, and an American Antiquarian Society William Randolph Hearst Creative Artists Fellowship. Residing in a house full of books, surrounded by owls and trees in beautiful Stillwater, Oklahoma, Parkison is the director of the Creative Writing Program at Oklahoma State University, where she teaches fiction writing.

Carol Guess is the author of nineteen books of poetry and prose, including Darling Endangered, Doll Studies: Forensics, Tinderbox Lawn, and With Animal (cowritten with Kelly Magee). In 2014 she was awarded the Philolexian Award for Distinguished Literary Achievement by Columbia University. She teaches in the MFA program at Western Washington University and lives in Seattle.

Kaja Rae Lucas (@kraelucas) is a writer & poetry reader for Brave Voices Magazine. She has been published in Crab Fat Magazine, L’Ephemere Review and elsewhere, and has a chaplet with Damaged Goods Press.