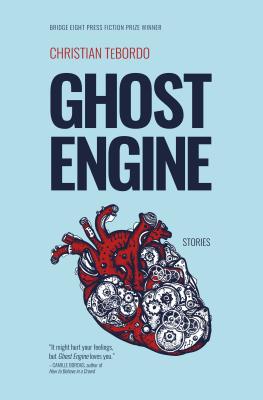 Christian TeBordo’s sixth book is a collection of short stories connected by yearning and loneliness. A pair of brothers build a flying machine and taunt their mother; a sister runs away, leaving her sister to question why; androids populate a town center only to question their own existence; and a death metal band gets mistaken for Christian rock. But to simply explain what these stories are about is a disservice. They are at their core an inquiry into language and its debilitating effect.

The title of the book comes from a series of stories in the collection that follow Frag and Watt as they try to save “the ghost engine.” It is never revealed what exactly makes a ghost engine or what would save one, but the fuel for such an apparatus is the lifeblood that runs through the rest of this collection. The two characters poke at this concept from all angles and eventually from within as well. Their pain is a provocation to the reader to bleed for their own set of answers.

A few of the stories share characters. Some nod to others with a quick footnote. The whole collection moves with a knowingness that seems to put each story in conversation with the last. One example is a recurring narrator named The Ultimate Warrior, and for all intents and purposes, it is, yes, that The Ultimate Warrior, made clear by the detailed digression about his vendetta against Hulk Hogan. These occasions still feel somehow unconnected by theme and expression, playing off one another in the same way an episode of Seinfeld would resonate with an episode of Veep if they played back to back. Julia Louis-Dreyfus plays a comic role in both, but because of time, content and audience, only her appearance remains familiar. The whole concept points toward the effortless connections our brains make between pop-culture, high-art and our everyday lives.

The story that seems to accomplish this effect best is “One to No One”, in which the narrator follows a homeless woman who tells him she is performing at the Borgata Casino tomorrow. The joke is that the performance is always tomorrow, in the same sense that if there is a sign in a bar that reads “Free Beer Tomorrow” every time you walk into the bar all the bartender has to do is point to the sign, no matter if you return the next day. This infuriates the narrator into a kind of obsession, until it is slowly revealed through a series of detailed thought experiments that the narrator is no more sane than the homeless women because he thinks he is The Ultimate Warrior.

The standalone stories fall somewhere in the George Saunders/David Foster Wallace camp of concept-driven, style-heavy ruminations on the lifestyles of others. A good example of this is the final story, in which an ex-girlfriend writes to TeBordo about her brother’s obsession with Ayn Rand. On one level it is a less than generous rendering of a young man trying to find his way in the world. He is repeatedly misguided but manages to convince a few people to follow him on his journey that is at the very least a mediocre life. On another level it is a sister trying to make sense of her own world through the lens of her misguided brother. And it’s the care she takes in wondering why. Why does he live with his parents? Why does he take the first job offered to him? Why does he do everything he is told? Not that she is ever confused about her brother’s moral compass, but wonders if he has any will of his own. There are moments in this story, and in this collection as a whole, that bring the reader to question free will. There is a certain mechanism at work here. The gears turn, the oil pumps and the machine hums. The ghost engine runs on a kind of faith, a social contract that seems to be written in heartache.

The last story, “Return Return”, begins with the sentence, “You’d be surprised what you can accomplish with a broken wrench, blunt force and dogged repetition.” The answer to that would be of course modernity, the senseless movement toward brighter, taller, faster, but that’s not what TeBordo’s characters are yearning for. The senselessness instead becomes a spectacle. The ghost engine is the flash in the pan, the thing we talk about around the water cooler and the hope and the terror that makes each day something worth living.

It goes without saying that TeBordo is an excellent writer, but it is at the sentence level that his writing really shines. In this scene from “The American Family Robinson” he manages to track movement, set pace, hit a few senses and leave the scene with a solid and gripping image:

Later that night, I stood on the back deck and watched my parents swim naked in the pool by the light of the not-so-distant fires. Animals scurried from wood to wood across the lawn. Flames flickered between patches and masses of smoke. It looked like someone had uprooted the Garden of Eden and grafted it onto hell.

The crux of this story is the guilt one sister has for the disappearance of another, but here we are set in the harshest environment, on the edge of a wildfire, and with a devil-may-care thrill TeBordo invites us in, almost as if its a secret or a brief glance behind a curtain. And maybe that’s the point here. Or as Frag says in “The Myth of le Mythe de Sisyphe”:

The implement I used to cut you open has lost its cutting edge. It fell off inside you as I was cutting at your flesh. There is literally no point.

Either way, TeBordo offers the chance to see more, the double meaning, the point and the second point if you’re willing to look. And given the chance, I will always prefer a glance behind the curtain than the show I paid to see.

Christian TeBordo has published five previous books including the novel Toughlahoma, which won Rescue Press’s Open Prose Series and The Awful Possibilities, a collection of short fiction. He lives and teaches in Chicago.

John Thurgood is a doctoral student at the University of Wisconsin-Milwaukee. His stories have appeared in Story|Houston, Another Chicago Magazine and others.