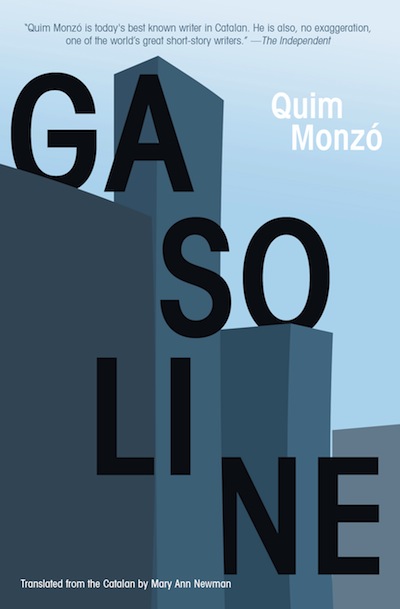 New York. New Year’s Eve. Part One of Quim Monzo’s Gasoline begins with Heribert Julia, a successful contemporary artist in preparation for a large gallery show. Heribert has three weeks to complete a staggering number of paintings. We are told this usually wouldn’t be a problem, only now he can’t seem to focus. Moving forward from New Year’s Day, we follow Heribert for the next three weeks as he wanders about the city, avoiding his studio, tailing his wife and her new lover, and, in general, giving up to a crushing professional despair.

He lines up all the blank canvases he has in the studio and examines them. What if he showed just that: white canvases, without the slightest trace of a human hand? It’s been done. Minimalism. And anyway, if he signs them he will have placed a few strokes of his own. He could not sign them. Someone must have done that, too. Is there anything original left to do? Even half-heartedly filling up all the walls of an exhibition isn’t new. Do you really have to do something new? Out of honesty, people often refused to be original. And out of honesty people often fall silent rather than open their mouths only to hear their own voices. Will he be able to tell when he opens his mouth and nothing interesting comes out?

Gasoline’s clever trick is that as Heribert unravels, it suddenly becomes clear to the reader that this is not really a novel about an artist in crisis. What Heribert does is pose a question. And when Part Two begins 75 pages later and the narrative turns to Humbert, an up-and-coming contemporary artist, we begin to understand Heribert’s question and how we might want to consider it.

Heribert is inertia, Humbert is action. Two ends on the spectrum of creative energy. The novel begins in January, with Heribert treading air off the cliff edge of his artistic trajectory and poised for a spectacular fall. Monzo completes Heribert’s arc, in all its neurotic and painful glory, and then launches Humbert. Faster and faster he goes – painting, swimming, thinking, drawing, taking photographs, making notes, traveling, working. A hurricane of creativity. Slowly, however, Monzo inserts a series of subtle and not-so-subtle clues to alert the reader to the fact that Humbert is essentially on the same flight path as our poor Heribert. In this way, Monzo uses the structure of Gasoline to reveal its central questions: what is true creativity? Does artistic truth exist?

Now, satire is best when it doesn’t pull its punches, and Humbert is thoroughly skewered in Part Two. But Monzo takes this a step further by casting a shadow backward on Heribert, the very standard used to set Humbert up in the first place. Suddenly, he is no longer a foil, an example of true artistic integrity to be held against Humbert’s absurdity. We begin to suspect that Heribert, in the heyday of his own artistic success, was equally ridiculous. This cannibalizes Monzo’s questions and broadens the scope of the novel’s irony. Excellently done.

Despite the success of the novel’s thematic project, Gasoline obliges its readers to tolerate a claustrophobically close third-person narrator. On the one hand, this makes for an effective textual echo of Heribert’s dejected breakdown and Humbert’s hysterical production, but it can begin to wear. Under this limited focus, actions are broken into their smallest sequences, often becoming no more than a stack of staccato-like images: a hand on a book, a finger on a page, an eye on an image.

They sit at a table. They order coffee. The waiter brings it. The girl pays for it. She says she’s delighted to buy coffee for such a prestigious artist. He picks up the cup and pours the coffee over his head. She laughs and asks him again if he hasn’t been drinking. Heribert says no, and to prove it, he gets up from the chair and balances himself on his left foot while raising his right thigh until it is parallel to the ground.

Notwithstanding the succinctness of this style, Gasoline is as much surreal as it is realistic. Part One and Two both begin with vivid, highly-detailed dream sequences, the borders of which Heribert and Humbert have trouble locating. As each story gains momentum, the men often find themselves in bizarre situations and unconventional adventures. One of the more interesting aspects of the book, however, is that as the central question reveals itself, a measure of the novel’s surrealism is replaced with a dark and comical realism. This aesthetic shift only heightens the novel’s ironic project.

Ultimately, Gasoline is an intelligent mix of philosophical inquiry, dark humor and snide finger-pointing. Monzo takes a specific art scene, New York of the early 1980s, and uses it to launch a universal and timeless enquiry of ego, artistic standards and the creative process.