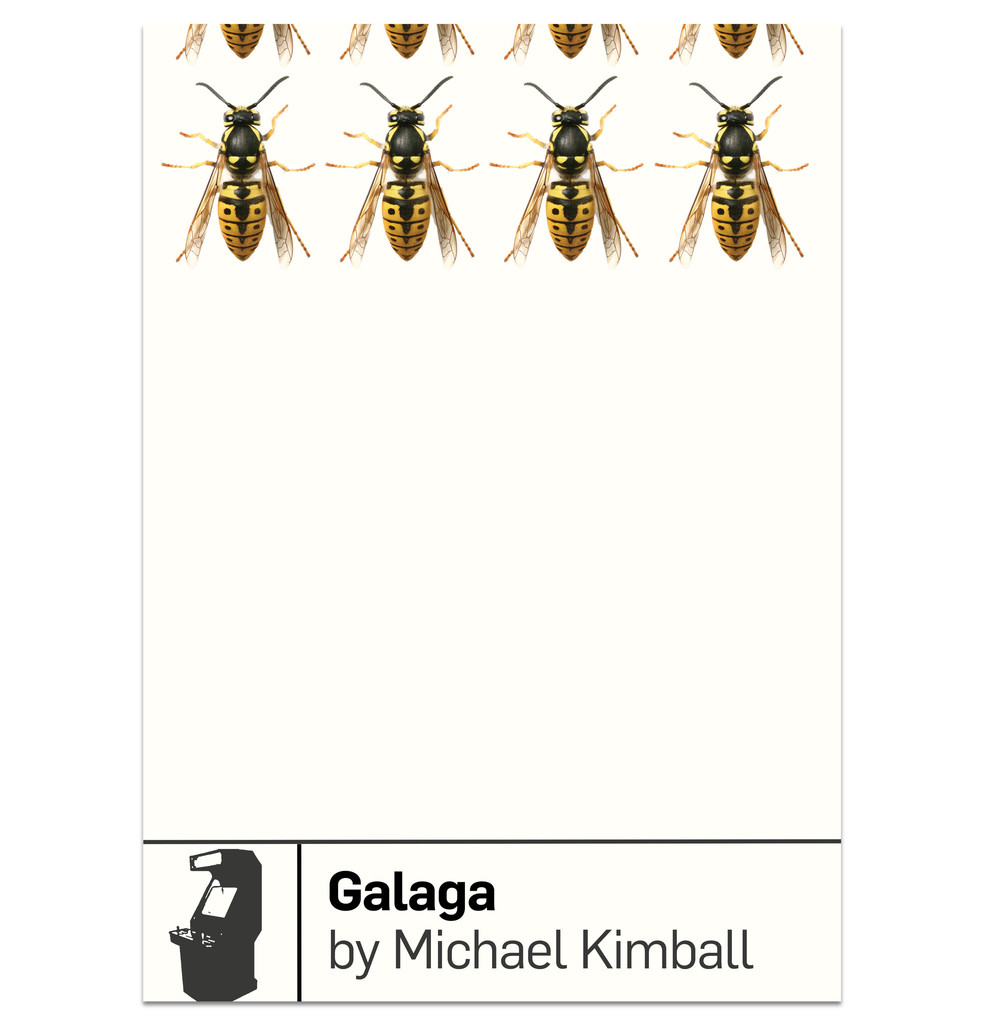 There are times in our lives when we need some help, a tossed rope to help us through. Often this occurs during adolescence, those years in which we are powerless to radically alter our circumstance and where our sense of perspective has not yet developed. It’s a dangerous period, a time of bad choices and lifelong regrets. If we are fortunate, someone or something finds us and shines a light. In his latest book, Michael Kimball writes about just such a juncture in his life and how he was, to a degree, rescued by a video game.

A pair of up-front admissions: I am a fan of both Michael Kimball and Galaga, the game. I’m sure these added to my immersion into the book, but by no means do I believe either of these conditions was necessary to my enjoyment. Kimball’s GALAGA can be read in a day, and one is drawn in by the unique structure that resembles the game itself—a series of 256 stages, each a paragraph long. Kimball creates a collage of sorts, and using shifting frames of reference and tone, he takes us on a journey through all things Galaga. We receive tips on strategy (double fighters!) and tutorials on the inherent patterns of each screen. We delve deep into the game’s history, meeting its predecessors, spawns, and creator. We see the game referenced in rap lyrics and movies and other facets of popular culture. We see its reflection in our society’s love for ephemera (A kimono! Slip-ons! T-shirts! Cufflinks! Earrings! Sweaters, both human and canine!).

This working of Galaga into the fabric of our times is paralleled by the role it finds in Kimball’s own life. As a boy bullied by his father and older brother, Kimball seeks a niche, a space both safe and engaging, and he finds it in the dark enclave of Aladdin’s Castle arcade in the Lansing Mall. Listen to the young narrator’s lyrical introduction to this refuge:

I walked into the place and was engulfed by sound: the splash of tokens from the change machine, the flippers and clatter of the pinball machines, the tokens being dropped into coin slots, the hopeful theme music that started so many arcade games, all the beeps and dunh-dunhs, all the shooting and explosions, all of it mashing together into a wall of sound. I had never heard anything like it before, in part because there had never been anything like it before. It was loud and dark in Aladdin’s Castle, dimly lit except for the blinking lights of colorful machines. It was a disorienting place and I was a little shy at first. I didn’t know how it worked and I didn’t have anybody to ask.

It’s here that the young narrator finds his sanctuary, a place where his quarters allow him an escape into another dimension, not only the virtual world of saving the galaxy but also a very real place without violence or its threat. This narrative of Kimball’s learning and eventual mastery of Galaga becomes the story’s core. We see him find his way, and we cheer for him as he secures his place in an environment where he finally feels safe. He develops a friendship, one that won’t last forever but which will bridge these difficult years; a friendship rooted, appropriately, in Galaga.

Todd and I first bonded over playing doubles together in tennis and then over our love for video games. We were a pair, best friends, and it felt so much cooler going to the arcade with a friend than going by myself. So it seems right that the first video game we both loved had a new feature that involved double fighters, which have become a retro representation of our friendship.”

Things change in the narrator’s life. While his home front doesn’t have a happy ending, there is at least a subsiding of his torment. He finds a girlfriend. He runs track and plays sports. A quarter can’t last forever, and soon, the game loosens its hold. He grows older and moves on. The dark arcades of the 70s and 80s fade, their market taken over by home systems. Yet the game remains, in truck stops and bowling alleys and bars. It’s here, at the end, when the adult Kimball makes a stop along the Ohio turnpike, that the story comes home. We see the adult—happy, possessing the perspective of years—playing the game that helped define his childhood. He plays well, finding what he was looking for before his game has ended.

Molly was standing next to me, lightly pressed against me as I played, and I realized that this was the feeling I used to have when I played Galaga. I said, “Let’s go,” and walked away from the machine. I could hear the double explosion of my double fighters being destroyed as we walked out toward the parking lot.

In Kimball’s world, Galaga is more than another way to waste a quarter. The game has become a benign part of our culture at large, a bringer of escape and engagement. Kimball takes this phenomenon and delves into a deeper truth—that we can find our salvations in the most unlikely of places, glimmers waiting for us to accept their invitations. If we’re lucky enough, we get to grow old and recognize these gifts. In this light, GALAGA is more than a book about a game—it’s a thank you from Kimball and a reminder to all of us that, with a little bit of help, things often do indeed get better.

Michael Kimball is the author of six books, including Big Ray, Dear Everybody, and Us. His work has been on NPR’s All Things Considered and in Vice, as well as The Guardian, Bomb, Prairie Schooner, New York Tyrant, etc. His work has been translated into a dozen languages—including Italian, Spanish, German, Chinese, Korean, and Greek. He is also responsible for Michael Kimball Writes Your Life Story (on a postcard), a couple of documentaries, the 510 Readings, and the conceptual pseudonym Andy Devine.