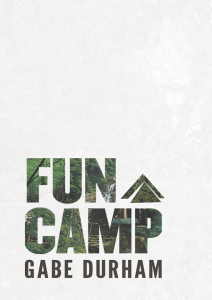 Gabe Durham’s Fun Camp tours readers through the confusion and passion of youth over the course of one week spent at a summer camp dedicated to encouraging its visitors to become new fun creatures free from the bonds of who they were before. Bad behavior is valued in the proper context set down by the camp, although its rules seem fluid throughout the course of the work. The struggle to understand and embody the rules of the adult world is a strong thread throughout, and a common conflict in the lives of all teenagers.

The rules for the camp start in the very first piece “No Moms for Miles,” and set the tone for the collection. “No thinking of pulling the Prank of the Century and then not doing it.” This line, and others such as, “Leave room for the Spirit of the slow dance,” illustrate that bravery and individuality is held in high regard. There is no quarter given for wallflowers at Fun Camp, and this becomes clear as the work progresses and unfun campers are ordered home.

No unfun thoughts. No holding back. Half a forest got burned down for you to live it up.

The only broken rules the camp takes seriously are ones which jeopardize its mission, such as printing fake camp money or raiding the iPhone closet. Other than that, campers are encouraged to become engaged with joy where they find it.

The book is sectioned into the days of the week, Monday through Sunday morning, during which the camp takes place. The first section introduces readers to the camp as well as Billy Matthews, a camper who is as close to a protagonist the floating narrative has. Throughout the work, Billy’s letters to his mom relate his expanding mind to his family back home. While his concerns move from the everyday, “I miss you. And Dad,” they quickly move on to deeper thinking such as “Though a tactical failure, the Vietnam War really was waged with admirable intentions.” His progression—away from fears that his siblings will enter his room while he is away at camp to distress that his mother might have hid secret food combinations from him or that he is disadvantaged by not having been raised in a bilingual home—is clearly the result of going to the camp where sleep is restricted, where free time includes options such as, “You can use me or define me or ask for my place of origin,” and where moral questions involving a Satanist, her money, and her goat are the norm.

Billy may be the protagonist of Fun Camp, as it is his change throughout the course of the book readers are most engaged with, but the hero of the camp is Tad Gunnick. Tad’s quotes receive standing ovations on skit nights, and the girls at the camp love him. In fact, many owe their first heartbreaks to Tad, as shown in this example from one of the ‘warm fuzzies’ the campers write to one another then pin to a clothesline:

I hate you, Tad. You don’t just introduce yourself to a girl on the dock and chat her up about the little podunks you’re both from…then go ask some slut like Helena Johnson on the Midnight Hike.

Tad possesses all the qualities Fun Camp hopes to instill in its campers. He has free will enough to invade the ‘Tree of Safety,’ and spray Leni with a water gun across her enormous rack. He’s the next step in evolution the camp hopes to see in all its charges.

It is important to note that Billy and Tad each appear only briefly in the cacophony of characters and voices which make up Fun Camp. They exist in a legion with permanent staff members, priests, nurses, the director, counselors, and other campers in different stages of development. The collection is not character driven so much as it is voice driven, and oftentimes it’s not apparent whose point of view the reader is sharing. As each piece in the collection is rarely over a page long, each thought, complaint, suggestion, and brief story become a thread in the tapestry of the camp. The book moves from counselors like Dave and Holly, to a disembodied voice commenting on the bathing habits of male campers, to the rules for the camp pool without hesitation. Readers don’t follow a character meeting struggles to achieve a goal in Fun Camp so much as they close their eyes and open themselves up to a flood of voice, some known and others not, which inhabit that one week in time far away from their old lives.

Fun Camp is a wonderfully nuanced exploration of youth taken away from the familiar, and given the adult task of knowing which rules to keep, break, and change. More importantly it illustrates the desire to be accepted by being unconventional in a new convention, and explores the adolescent desire to be a better person no matter the cost. Much like the campers want a perfect Midnight Hike, we all hope for a perfect something even if the something keeps changing and is ultimately only a romantic idea.

Michael Wayne Hampton’s work has appeared in publications such as The Southeast Review, decomP, and Atticus Review among numerous others. Last year he was nominated for Best American Short Stories, and in 2013 his short story collection will be released by Foxhead Books. Winged City Press published his micro-novel-in-stories Bad Kids from Good Schools earlier this year. He can be reached through his website at michaelwaynehampton.com.
Share This