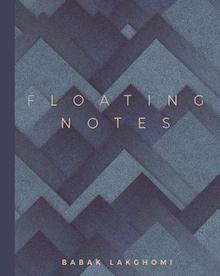 Floating Notes by Babak Lakghomi is in equal parts sure-footed and disorienting. Beyond simply telling a story, the experimental thriller works to involve the reader in the experience of paranoia. In 100 pages, segmented in short bursts of language, Lakghomi creates an immersive text that grapples with absurdity and alienation. The narrative is remincient of the nameless, faceless mysteries in Paul Auster’s early novels and also the lilting intrigue and suspicion found in the stories of Kafka. Lakghomi’s voice, though, is singular, contemporary, and considerate.

In the opening pages of Floating Notes we are introduced to our narrator, whose mind we inhabit for the remainder of the novella. He chooses to be called “Bob,” rather than his true name which, he suggests, is foreign and difficult to pronounce.

This frames the story and lays groundwork for a character who is misunderstood on a fundamental level and displaced in his environment. Bob is unsure of himself and suspect of the world around him. He maintains an inexplicable openness, colored by his apprehension. Throughout the story we are at home in his mind even as we are held at bay by him. We become invested in the mysterious phenomena surrounding Bob, the gradual disappearance of everyone he comes in contact with, and the invisible forces that may or may not be conspiring against him.

The most moving and unsettling features of the story take place in Bob’s mind. He’s haunted by his memories and by experiences he borrows from others. A girlfriend’s notebooks, encounters with strangers, and the confession of a policeman bleed into Bob’s own recollections of his estranged family and his life of imagined intrigue. The combination creates an unreliable picture of the world and, ultimately, lends to Bob’s muddled conception of himself.

Back at the motel, the air smelled of a dead skunk. The policeman had put a chair on the porch. He puffed at a joint, a beer bottle in his hand.

Join me Neighbour, he said.

Maybe he is not a bad person, I thought.

After two puffs, his husky voice echoed in my head. His face stretched and turned into other faces.

I killed someone today, the policeman said. He started to sob.

I looked at him and pictured him pointing his pistol at his own temple.

The story is built on this muddled conception but it is not tied to it. Lakghomi intersperses dream segments, hypotheticals, and flashbacks to create the surreal impression of a fugue-state. The hyper-specific (i.e. “Dew sat on the orange leaves beneath our boots”) is married to the vague and the general (i.e. characters and locations remain nameless) never fully allowing us to find our footing in Floating Notes’ expansive world.

Lakghomi maintains no loyalty to realism or the absurd. One moment we are in a standard bar or coffee shop, and then we are in a neighbor’s apartment, surrounded by cartons of eggs. Nothing is certain, nothing is guaranteed. Even the most concrete and basic constructs of Lakghomi’s fiction have the potential to slip through our fingers. The unremarkable and everyday are tinted by an ominous and foreboding sense of apprehension and impermanence:

In my dream, Sheila was lying on the snow. Her eyes were closed. She had long hair that reached to her feet. The red-crowned cranes were dancing around her body. They started to peck at her pale skin.

The novella compels you to move quickly through its succinct 100 pages. It is formatted in short fragmented sections that often read like narrative poems or micro-fictions. The prose is economic, sparse, and minimal, which enhances the sense of mystery and menace. Upon the book’s completion you are not left with a sense of resolve or with the tidy confirmation of a completed story. You are left, rather, with a sense of the way things are. The way things are for Bob, yes, but also a greater sense of the way things probably are in general.

Bob’s fragmented and harried life indicates that personal instability can spread like a contagion. He finds himself strung in the center of a web of alienated peoples. They all, to one degree or another, succumb to various manifestations of paranoia, guilt, and insanity. It at first appears as though Bob is some singular vehicle for paranoia. But the unfolding story suggests that it’s actually through the paranoid eyes of Bob that we can recognize the latent insanity and isolation constantly at work in the world.

Her bed was by the window side. You could see the bare trees through the window. She noticed me looking out at the trees.

Do you see that plastic bag on the tree? Sheila said.

It has been there from the day I came here.

The chicken tastes like rubber here, Sheila said. She pressed the knife on the chicken until the knife broke into two pieces.

She needs to rest now, the nurse said, and directed me towards the door.

I’ll see you tomorrow, I said to Sheila.

In the hallway, a young boy was screaming. His mouth foamed. The orderly and one of the security guards were holding him down. Another nurse ran towards them and injected the boy with a syringe.

The orderly turned toward me and winked.

Floating Notes is a startlingly strong debut. The lack of ultimate resolution and the ability of the work to invite you into its own logic—its own mind—is what makes Floating Notes an important piece of art and an authentic reflection on guilt, regret, and fear. The novella remains with you after you’ve read it. It colors the way you see the world. It is an empathetic book in that it expands the reader’s imagination regarding the interiority of his neighbor. It suggests there is a common striving that ties us to the world and to the experiences of others. In this way it is an unflinching account of both isolation and community.

When I don’t know what else to do I like to write down things in my notebook. I like to do this in a laundromat or a coffee shop. I sit by the window and write. I sometimes cut pieces from newspapers and attach them to the pages.

Some of the notebooks were thrown into the river. Some of them were lost in a flood.

Now, I write my notes in a very small handwriting that only I can read.

Some nights I dream I am on my father’s boat and I’m fishing my old notebooks from the bottom of the river.

Babak Lakghomi is the author of Floating Notes forthcoming from Tyrant Books in July 2018. His fiction has appeared or forthcoming in NOON, New York Tyrant, Egress, and Heavy Feather Review among other places. Babak was born in Tehran, Iran, and currently lives and writes in Hamilton, Ontario.