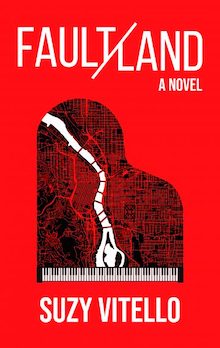 Some disaster stories are aftermath stories. What happens after the [volcano erupts/bomb goes off/levees break/insert other crisis here]? What was the scale of the devastation? How does life go on post-catastrophe? In contrast, Faultland by Suzy Vitello deals only briefly in what happens after a deadly 6.9 magnitude earthquake ravages a post-pandemic Portland, Oregon in the year 2030. Perhaps the novel’s greatest strength — and also its most anxiety-inducing feature — is its willingness to linger within the ongoing disaster itself.

Faultland centers on the Sparrows: an emotionally distant yet deeply entangled family enduring their own individual hardships — a painful divorce, being the primary caregiver for a dementia-ridden father, the business woes that surround ever-evolving marijuana legalities — while also sharing the burden of a long-unspoken traumatic family event. The force of an earthquake finally unearths the scale and reach of this trauma, offering insight into how it has been experienced by each of the three Sparrow children. Every subsequent aftershock lifts more buried memories to the surface. As chapters shift in focus between the siblings, the mystery of the past is slowly unraveled alongside the fallout of their disastrous present.

Set only ten years in the future, dread follows the course of Faultland in ways familiar to us today. For instance, the deceased mother of the Sparrow children is said to have lost a battle with “that fucking virus” COVID-19. Indeed, frequent references are made to the consequences of the pandemic that persist long after lockdowns lift. Olivia, the eldest Sparrow sibling, has a five-year-old daughter who is said to be “part of a generation of kids who treat handwashing the same way the previous generation grew up fastening seatbelts the minute they settled in a car.” Sherman, the youngest of the Sparrows, develops a strain of marijuana to counter the lasting effects of the social distancing and quarantine policies that plagued the early 2020s. The strain is described as “a true techno-weed, perfected to eliminate dry-eye and dizziness while creating magic for the libido — not in the crazy wood Viagra way, but in that all-encompassing desire to connect with another human.”

On the eco-critical side of dread, Vitello uses the story’s placement in the near future to explore the looming consequences of our current environmental reality. The earthquake itself is but one harbinger of the continuing threat of climate change. In another example, Morgan, the middle Sparrow child, dreams of leaving Portland to lead an adventurous life in some exotic locale, but fears such places will disappear due to rising sea levels. Vitello writes, “For one afternoon, she fantasized about becoming a breadfruit farmer in Majuro […] But Majuro no longer exists, the whole island washed out to sea. In recent months, she’s turned her fantasies to higher ground. Sri Lanka. Upland Maui. New Zealand, perhaps.”

Adding to the grim plausibility of Vitello’s 2030 American future is a population deeply divided politically. In a “Post-Trump” era, Faultland shows the expanding presence of a marauding militia of alt-Right conservatives who wield sophisticated facial recognition technology to hunt undocumented immigrants. Vitello writes, “The fringe element, once thought of as paranoid outliers, became increasingly vocal and combative after the COVID nightmare. Historically claiming to be ‘anti-government,’ they were now close to legitimizing their infiltration as an actual arm of the Feds.”

Throughout, the technology proposed in the book is advanced along a logical trajectory in a way that is similarly unsettlingly recognizable. Its presence bears all the hallmarks of the industry’s less scrupulous business practices and current vulnerabilities, while simultaneously commenting on our device-dependent lives. The most heavily referenced gadget is the Crypto Cuff — think voice-assisted Apple Watch with hologram and projection capabilities — which replaces smartphones after a “Chinese cyber-attack” renders them permanently obsolete. Wearers of the Cuffs are prone to painful, stubborn wrist rashes on account of their synthetic materials. Yet, when the Cuffs go offline following the earthquake, people continue to wear them and repeatedly return to them as if reaching for a phantom limb.

But things aren’t all bleak, however. Vitello shrewdly employs humor throughout to alleviate the tension that comes from following individuals as they reconcile with disaster after disaster. We are introduced to Morgan Sparrow through an amusing scene illustrating her work in advertising. In it, she gazes upon an ad for menstrual products in which “cartoon tampons do-si-do with menstrual sponges,” conceived by a brand seeking to “normalize menstruation to the point of welcome.” Olivia Sparrow, the uptight, judgmental sibling known for throwing metaphorical stones from her literal glass house, spends much of the book gaining humility in different ways, from first being comically slighted at the gym to later sleeping in makeshift shelters with the rest of the displaced. After the earthquake interrupts her appointment at a boutique hair salon, she traverses Portland to reunite with family while her hair is still matted in bright dye, a salon cape billowing behind her.

While projecting a plausible future of an American city in a state of crisis, Faultland manages to stay grounded in the complex story of a family in the midst of shared trauma, loss, serious betrayal, and now natural disaster. Though some of the more ominous aspects of Vitello’s imagined 2030 Portland were less developed than others, in playing out crises both painfully familiar (e.g., pandemics, environmental doom, social unrest) and thankfully still unfamiliar (e.g., diminishing fertility rates large enough to make pregnancy an anomaly), the novel succeeds in interlocking the anxieties of modern life with their seemingly inevitable consequences in a surprisingly lighthearted way. As a result, Faultland is able to reckon with the current existential dread of day-to-day life in a post-COVID world, while also warning that the worst is never really over.

Suzy Vitello writes and lives in Portland, Oregon, with her husband, their dog, and occasionally one or more of their five kids. She holds an MFA from Antioch University Los Angeles and has been a recipient of an Oregon Literary Arts grant. She’s a ridiculous fan of the Portland Timbers and Thorns, so don’t talk to her for at least a day after a match loss. Her young adult novels include The Moment Before and The Empress Chronicles series.

Elizabeth Holli Wood is a Cuban American writer based in the UK. Her nonfiction is featured in the book Alone Together: Tales of Sisterhood and Solitude in Latin America and her flash fiction recently placed in the Writer’s Digest Short Short Story Competition. She holds an MA in Creative Writing from Birkbeck, University of London and hosts the Design Mind frogcast, a podcast about design and creative people.