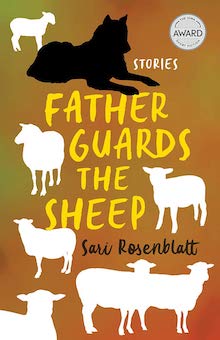 We are taught that the American Dream is attainable, that its pursuit is exciting and will inevitably bear fruit. But what of the American protagonist who suffers internally? Whose daily battles don’t take place in a courtroom or on Wall Street but in a humble department store? A farm in Naugatuck Valley? An elementary school auditorium?

Such quiet voices are captured in Sari Rosenblatt’s Father Guards the Sheep, a collection of eight stories set in late twentieth-century Connecticut. Ruth, a research assistant at NYU, wavers in her decision to remain in the city or commit to a relationship with Todd, a high school teacher living in Naugatuck. Sam and Sunny, a young married couple, struggle to balance work with the travails of raising a family. Joel, a nine-year-old parented by a single father, is befuddled by his father’s god-like ability to captivate audiences with lectures on U.S.-made rubber. And there is Esther, newly arrived in New Haven, whose career as an arson researcher rests flimsily on a lie.

In Father Guards the Sheep, harvesters yearn to be academic, factory workers rise in the lecture circuit, and young teachers quietly disrupt their schools. The collection chronicles a time when secure notions of family and work were eroding, and the roles of men and women were no longer easy to define. For those who came of age during this period, it was suddenly not enough to find a spouse or take over one’s family business. The world had expanded to include more possibility, as well as more disillusionment.

The thread connecting Rosenblatt’s handful of carefully chosen characters is Ellen Schmurr. The first narrative, “Daughter of Retail,” centers on the adolescent Ellen’s stint at her father’s department store, Schmurr’s of New York. Because she is a child of the one and only Schmurr (Say what you need, get what you want, we got the whole Schmurr!), the family’s retail destiny is thrust upon her. Testing the waters of young adulthood, Ellen is not sure this fate will suffice. Unlike her brother, Stuart, the likeable, athletic, natural salesman of the family, Ellen struggles to banter with the customers and is bewildered when loud women, on break from the nearby rubber plant, order her to locate bras and stockings. After waiting on a voluptuous older woman who croons to her from the dressing room and undresses without shame, Ellen realizes that “while I didn’t ask for retail, I knew, for better and for worse, it was beginning to happen to me.” That “it” refers to everything that troubles Ellen — the prospect of an unsatisfying life in retail, her burgeoning sexuality, her Jewish heritage.

The theme of thwarted aspiration runs throughout Rosenblatt’s collection, as her characters strive to become something larger than themselves, only to find themselves at odds with those around them. In “Miss McCook,” Ellen, now an adult, is substitute-teaching a fifth-grade class for the eponymous Miss McCook, who is on maternity leave. Ellen has branched out from the family business, attempting — foolishly, as the reader now knows! — to alter her destiny, much to her parents’ chagrin. Their comments on her new life suffocate even as they conjure a smile, as when Ellen’s father, concerned about fire in her new apartment, proclaims, “The fire escape looks good for nothing. Good for cat piss.”

Ellen yearns for the attention of her fifth-graders, but they refuse to acknowledge her existence. The result is Ellen’s eventual submission to an alternate universe in which children chant made-up names for her, imagining they are hunters and creating animals out of colored paper. When obscene messages are found flying outside her window, Ellen lies to the principal by claiming they celebrate the coming of spring. Just as she hides the inner recesses of herself from her family, she conceals the truth of what happens in her classroom from her employer. On dress-up day, her conversion into this “other” self, a kind of impersonation, is complete. Wearing their nice, neat uniforms, the children scream with joy when Ellen arrives in a fur stole and second-hand dress. They inform her that this new incarnation is not her; their old teacher, Miss Schmurr, would never wear such an outfit. Ellen basks in this long-awaited acknowledgement, achieved only by becoming someone she is not.

Throughout Rosenblatt’s collection, characters edge into despair only to ricochet back with humor, as when Sunny, the exhausted housewife in “Sweethearts,” notes sardonically, “The house has become me, and I have become its handmaiden.” Sunny hungers to overcome conflict with her husband Sam, whose grounding, banal outlooks on life tend to infuriate her. Sam is more concerned with his work than with his sweetheart’s daily battles with PTO rivals and screaming children. Sunny observes him “stand(ing) before the dirty dishes as if they don’t exist.” After describing a particularly draining episode with one of their babies, Sam replies, “You’re lucky you can stay home with her! […] Are there any snacks?”

In the final tale, “As in Life,” Ellen — now divorced and a mother — returns home to interview nurses to care for her ailing father. Her brother Stuart has inherited Schmurr’s Department Store, which has floundered since its heyday in Ellen’s youth. As she navigates her father’s growing amnesia (“I need to talk to Elliot Rabinowitz.” “Elliot’s gone, Dad. You mean Larry Levy.” “I didn’t say Larry Levy, did I?”) and her mother’s efforts to reconnect her with an old college flame, Ellen marvels at how she still desires to please her family, to be considered “good enough.”

As Ellen and Stuart linger in the darkened department store after hours, Ellen marvels at the passing of not just a generation within their family, but of an entire era: women dressed up for luncheons, clutching vinyl purses; the three o’clock rush of factory line workers; the scratch of the accountants marking their ledgers in pencil. These sensual details evoke not only the Rubber Avenue of Ellen’s childhood but the larger experience of effort that reflects the central premise of the American Dream: Anyone can indeed be happy, if they try.

By capturing the struggles, hopes, and ambiguities of these lives, Rosenblatt suggests that even if happiness is not always attainable, acceptance of one’s shortcomings and those of others can enrich our lives with humor, imagination, and the temerity to be vulnerable. One of her narrators articulates this equipoise: “He gave all his attention to the night, to the long dark streets, people passing by windows … looking like they belonged exactly where they were.”

Sari Rosenblatt’s award-winning stories have appeared in the Iowa Review, Glimmer Train, New Millennium Writings, Ms Magazine, and Nimrod International Journal of Poetry and Prose. She holds an MFA from The Iowa Writers’ Workshop and teaches fiction writing at the Educational Center for the Arts in New Haven. She lives in Middletown, Connecticut.

Tina Choi, a graduate of Western Washington University, has taught in Seattle and on the Oregon Coast. She currently writes and lives with her husband in northeastern Oregon.