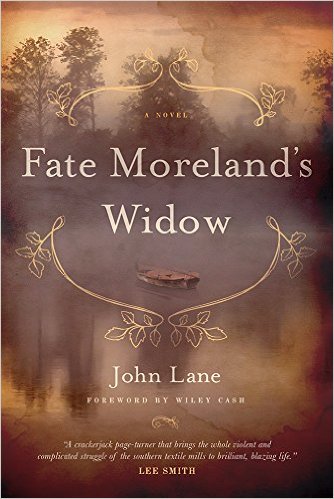 In John Lane’s latest book, Fate Moreland’s Widow, small mill town politics in the 1930s are explored through the lens of one localized tragedy. Carlton, South Carolina, becomes a hotbed of union action when the local mill boss targets workers shortly before being involved in a shadowy and mysterious accident. Privilege, politics in a changing country, and personal loyalty all come into question through one man who must walk a tightrope between the people he calls his own and those who pay his wages.

When the widow of his former boss comes to pay him a visit, Ben Crocker is thrust back into the past to recount a pivotal moment in his small town. While Ben was working in the office of the influential and wealthy McCane family, helping to manage oversight of a controversial mill and housing renovation, his boss became embroiled in a local tragedy. George McCane, the younger son who inherited the family business over his alcoholic older brother Angus, is involved in an accident on a lake just over the North Carolina border. Three people are killed in the accident, and soon Ben is asked to line pockets and call in favors to ensure George goes free.

The titular widow, Novie Moreland, exists largely at the periphery of the story. Beautiful, poised, and touched by tragedy, Novie captures the imagination and eye of the married Ben Crocker. He makes stumbling attempts to work out a way to ensure she and her young daughter are taken care of in the wake of her husband and son’s deaths, but for most of the story she is used more as a tether between the company man and the unionized workers who rally around her. As Ben tries to get closer to Novie, he’s forced to confront the darker implications of his boss’s lifestyle.

Lane places the localized death of a prominent and beloved man and his son within the larger context of the highly politicized textile mills of the 1930s. With the flying squadrons of strikers still fresh in the main characters’ memories, the McCanes begin an aggressive renovation project that forces the mill to close and many from their company-owned homes. Ben is given the task of overseeing the evictions, a slight promotion that puts him in direct conflict with local hero Olin Campbell. Union sympathies come to the fore once again as Olin begins rallying opposition to McCane’s actions, a move that’s exacerbated by the deaths on the lake.

At times, Lane tells the story in halting prose. It rings true as the voice of Ben Crocker, an educated young man from a hardworking, blue collar mill town. But it is difficult to find the rhythm of the story, and it often feels less passionate than one would expect given the subject matter. In this exchange, following the first round of tense evictions, something seems to be missing between the men.

On the drive home McCane broke the silence. “So what do you think about all this, Crocker? Don’t just sit there sulking.”
“It’s a big mess,” I said.
“You can do better than that,” McCane said. “Tell me something that will ease my mind.”
“The Sunday before last I heard a preacher at the Methodist church blame all the troubles on the Yankees. He said there wouldn’t be any call to reform our mills if it wasn’t for them. He said there were public floggings of the union organizers in the strikes up at Gastonia in ‘29. The preacher said they got what they deserved, and that didn’t set well with me.”
“Blaming it on the Yankees doesn’t ease my mind one bit either,” McCane said.

There’s a woodenness, a lack of emotion that seems to keep the events and characters at arm’s length from the reader. Lane devotes more time to providing local historical context than developing the character’s motivations, the exception being Ben Crocker. But even Crocker relies more on big-picture discussions of the tension between unions and mill owners to explain his own struggle to balance his sense of identity with the disenfranchised workers and the opportunities presented by aligning with the McCanes. As he ricochets between home and work, his family and his employers, the nuanced and difficult relationship between workers and mill owners is illustrated, rather than explained.

Interestingly, one of the most fascinating characters is one of the least utilized. Norris, a guard at the Carlton Mill where late in the book a strike is organized, is described as having used a machine gun during an earlier, county-wide strike. Lane touches on the conflict he must have felt, sitting behind a gun he could be forced at any moment to use against his friends and neighbors. Whereas Ben’s inner struggle is close to the surface — his family blames him, his employers exploit him, and he is torn between the two — there never seems to be clear danger to Ben himself. He’s a go-between and is at times given the cold shoulder by his former allies. But Norris was almost called upon to choose sides in an irrevocable way. That, more than Ben’s secrecy from his wife or attempts to rationalize his decision to stand by the McCanes, highlights the extremely fraught nature of mill-union politics.

By the end of the story, things tie together in a way that is very gratifying. And what’s more, the hero of the story is not Ben himself. An element of mystery, of closure without revelation for the reader is a strong note to end an at times rambling narrative. The payoff is worth sticking with the story through the ups and downs, although prior knowledge of mill town culture circa the 1930s could help soften some of the harder edges.

John Lane is the author of a dozen books of poetry and prose, including My Paddle to the Sea; Begin with Rock, End with Water; and most recently Abandoned Quarry: New and Selected Poems, winner of the 2012 Southeastern Independent Booksellers Alliance Book Award for Poetry. A professor of English and director of the Goodall Environmental Studies Center at Wofford College in Spartanburg, South Carolina, Lane is a 2014 inductee into the South Carolina Academy of Authors.

Bridey Heing is a freelance writer based in Washington, D.C. She is the News & Politics Editor at Literally, Darling, and a contributor at Hello Giggles and WildSpice Magazine. She has written reviews for The Intentional, PANK, and Bust. Her writing has also appeared at Huffington Post, xoJane, NO TOFU, and A Practical Wedding. You can also find her on Medium. www.brideyheing.com