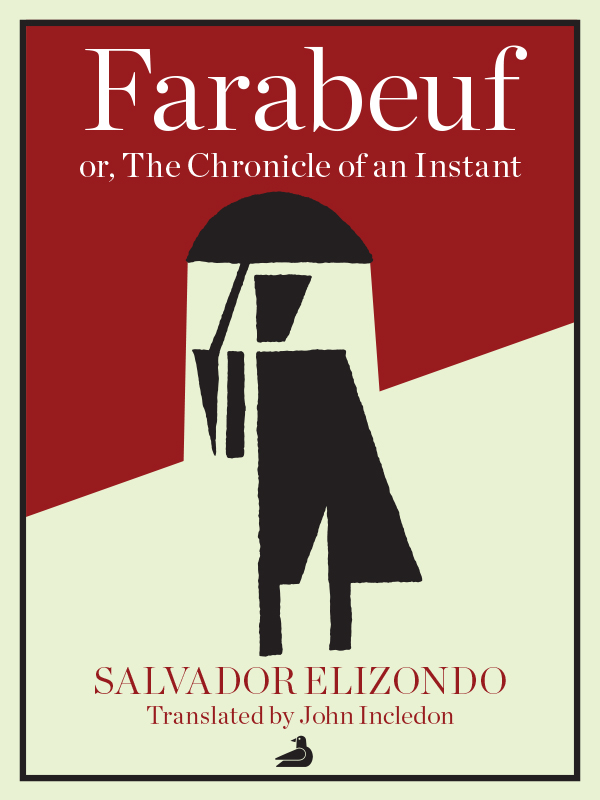 Salvador Elizondo’s Farabeuf is a Mexican novel published during the boom years of magical realism, yet it has very little to do with that style of writing. The book is subtitled The Chronicle of an Instant, a choice of phrase which neatly encapsulates the writer’s intention, with the reader enticed into, and then trapped inside, one looping, unceasing moment, forever trying to work out exactly what is happening.

The main setting for the story is prosaic enough. We are inside a house on a rainy day, condensation on the window. There is a painting on the wall, a mirror beside it, some people, waiting. A visitor, Doctor Farabeuf, approaches, leading to a mixture of anticipation, memories and…

…then we are wrenched away from the house to somewhere else entirely. One moment, we find ourselves on the beach, watching our partner racing ahead before stopping to pick up a starfish; the next, in the streets of Beijing in 1901, witnessing a particularly gruesome public execution and torture. Fleeting visits, over almost before they’ve begun, and we return to the rainy Parisian street – and repeat.

As you may have gathered, Farabeuf is not the simplest of works. The first two chapters, in particular, seem designed to thwart the casual reader, looping around and back on themselves before setting off on a slightly different journey. The sense of confusion is exacerbated by the use of differing points of view, jumping from first person to second to third with little regard for the reader’s comfort (or sanity). As a result, we’re rarely sure who is speaking to whom, or even how many people there actually are in the house – that is, if any of it is real, anyway.

It is left to the reader to make sense from what little context there is, with more details slowly revealed as the novel progresses. Gradually, the emphasis moves towards what is happening behind the closed door upstairs, each new visit providing clues:

Slowly, like someone afraid of disturbing the precarious balance of the dust suspended in the golden rays filtering through the faded velvet drapes, you must have walked, yes, slowly toward the window or the little iron table on which the bloody instruments lay abandoned to the gradual rust of the years and, passing before the table and heading toward the other side of that lugubrious room inhabited at that instant only by the dying sound of your footsteps, your foot would have accidentally grazed the table’s iron base, producing an indefinite sound that would have echoed spasmodically down the dark corridor, slowly dissipating throughout the house until it was lost in the last room, until it passed through the last door…

We continually return to the medical instruments strategically placed on the small table, knives flecked with blood, only later jumping dramatically into the point of view of a woman strapped down on a bed, eyes wide open, small cuts seeping blood.

Farabeuf abounds with symbols waiting to be deciphered, featuring reflections in the steamed up window and the strategically placed mirror, creating images stretching into infinity. It’s the painting, though (Titian’s Sacred and Profane Love), which provides the key to the story’s actions, even if you have to look very closely to see where Elizondo is leading us:

Putting together the clues, what the average reader might eventually conclude is that there is a story here of pain and pleasure. Despite the medical nature of the start (the scalpels, the doctor, the nurse), it appears the blood is actually being let for sexual reasons.

The Doctor Farabeuf who lends the novel his name was a real figure, a French surgeon active in China, with an interest in both photography and the ancient Chinese methods of torture. Elizondo was inspired by reading the good doctor’s book on medical procedures, integrating what he knew of Farabeuf’s history and interests into a work which seems almost cinematic at times with its focus on the moment and minute details.

Engraved on his eyes was the image of the moment, of the space where the deathly light of dusk slowly coagulated around all objects like blood flowing from an incision in a cadaver.

In addition to the decorative vocabulary, the writing often stretches out over multiple clauses, with frequent examples of sentences unwinding slowly, in no hurry to encounter a full stop. While the descriptive nature of the start of the novel brings Balzac to mind, there’s something Bernhardian in the looping style, Elizondo keeping the reader on a tight leash, returning us to the central focus again and again. With such a focus on style, the translator has a heavy burden to carry, but Incledon manages to bring Elizondo’s prose across into English nicely. The tone is consistent throughout, capturing a timeless feel, yet the unhurried pace you’d expect from the lengthy descriptions actually transforms into a kind of breathlessness, with the reader impatient to move on.

If the complexity of the main language of the text wasn’t enough, for the monolingual among the book’s readers more traps lie in wait. There is a sentence or two of German, smatterings of Latin and several pages, untranslated, of French scattered throughout the novel (a heads-up for the electronic reader – there are translations of these at the back of the book). While it all adds to the mood of the story, you could be forgiven for thinking that Farabeuf has deliberately been crafted to wear you down, and I’m sure that is, partly, the case. Eventually, you are happy to submit yourself to the doctor, trusting that the pain of the journey is worth the pleasure of understanding the writer’s intentions.

Farabeuf is a stylish, frustrating, maddening, deliberately obscure and impenetrable work, yet one which rewards the reader making the effort to follow the tangled thread of the story. The repeated questions of one of the book’s voices (”Do you remember?”) seem designed for the reader, urging them to keep moving along: ”You must concentrate. That is the only rule in this game. You must concentrate so that you will never forget.”

Good advice, even if it isn’t that easy at times. Nevertheless, those who do manage to focus on the confusing events of Farabeuf may well enjoy their time with the doctor. Yes, in literature as with many other things, it’s a very fine line between pleasure and pain.

Salvador Elizondo (1932—2006) was a novelist, poet, and playwright. His work rejected the magical realism so popular in his day, opting instead to incorporate cosmopolitan influences from Europe and elsewhere. He received the Xavier Villarutia Prize for the novel Farabeuf or, The Chronicle of an Instant.

Tony Malone is an Anglo-Australian reviewer with a passion for language and literature. In 2009, he started a review site, Tony’s Reading List, which has developed a strong focus on literary fiction in translation, featuring around one hundred reviews of translated literature every year.