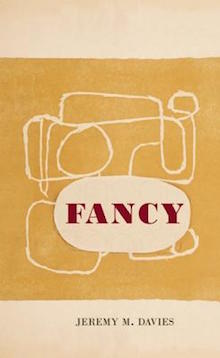 If you’re like me and my wife, you leave a nine page memo of instructions for the friend or family member who kindly agrees to take care of your cat when you are out of town. Sound familiar? No? The Cat Memo, as we refer to it, is divided into sub-sections, which include Food, Water, Litter Box, Toys, and Moods, among others. It is a living document, constantly updated as our beloved(/reviled) cat Tuesday changes and, sadly but inevitably, ages.

We, however, have nothing on Rumrill, the narrator of Jeremy M. Davies’ new novel, Fancy. The novel takes the form of a monologue by Rumrill, an elderly homebody, in which Rumrill instructs a Mr. and Mrs. Pickles on how to care for his twenty cats. In doing so, Rumrill recounts his own service as a cat-sitter and personal assistant of sorts to one Brocklebank, an Austrian immigrant with mysterious origins, who lived in Rumrill’s town with his notably unfaithful wife, Mrs. Brocklebank, and his own thirty cats. Rumrill also frequently returns to an affair that he may or may not have had with a woman who was his superior at the town library, where he may or may not have worked. (He never explains, however, when his cats need to be fed, or whether they take wet or dry food; I would have thought that he would have led with that.)

Davies breaks Rumrill’s speech into a series of paragraph-long statements, followed by Rumrill’s own asides, and intermittently interrupted by apropos quotations from Brocklebank’s journals. For example, in describing the end of his affair:

Rumrill said: I wish that I had kept a diary or series of typed notes as thick as a book to record, for my convenience, the details of the scene of the farewell between the woman in the stacks and myself. I could then consult these notes and give you a summary as to the disposition of this event both physically and temporally, which would allow you to imagine the scene with some degree of exactitude.

He added: Probably it was in the stacks.

Brocklebank writes: Substance having nothing to do with character.

In this manner, which may strike the reader as stilted at first but ultimately gives the novel a cadence that propels its narrator’s speech, Rumrill lays bare the circumstances of his life to the Pickles. The characters’ fanciful names—Brocklebank, Rumrill, Mr. Pickles—among other clues, however, invite the reader to question how much of Rumrill’s speech is to be believed. Is he in fact talking to a Mr. and Mrs. Pickles? Was there a Brocklebank? A woman in the stacks? Is there a Rumrill, or is there more than one?

As the credibility of Rumrill’s tale dissolves, what Davies leaves us with are images of a series of systems that serve no purpose other than to perpetuate themselves. We learn of a mailman who drives his route every day but does not deliver any letters, an opera performed for no audience, a note-taker who does not take any notes, perhaps even a cat owner with no cats and a cat-sitter who does not care for any. These characters appear to be at sea in life, and they moor themselves to routine for survival. As Rumrill says:

…it seemed to the old man, I say, and seems now to me, that each of our cats or “cats” is or was a machine designed not to comfort or complement the life of a solitary celibate, but for the manufacture of a particular condition or mode.

Davies portrays a world of almost no interpersonal connection, only the self reflecting back on itself, in an endless loop. (And the two main female characters, Mrs. Brocklebank, characterized chiefly by her infidelity, and the woman in the stacks, characterized chiefly by her taste for impersonal sex, present a discouraging view of the prospect for romantic connection.) In this world where nothing is definitively real and meaning is fleeting, there are only our habits, those things that we do to get through the day; they define who we are.

“We are what we repeatedly do,” Aristotle said, “Excellence, then, is not an act, but a habit.” Excellence does not seem to be in the offing here though, only survival. In a New Yorker cartoon by the illustrator Bruce Eric Kaplan, a man is talking on his phone and says, “I’d love to, but I have a million lonely ritualistic things to do.” There as here, rituals replace relationships as a source of meaning and sustenance.

Some readers will recognize and respond to Rumrill’s world more than others. Without a doubt, however, that world is fully realized and artfully portrayed by Mr. Davies. It is a dark vision of the self fundamentally alone, tying together the planks of its life raft system by system, or as the case may be, cat by cat.

Jeremy M. Davies is the author of Rose Alley and is Senior Editor at Dalkey Archive Press.

Dave Gunton lives with his wife and two daughters in Athens, Georgia. He is a regular contributor to The Broad Collective (www.thebroadcollective.com), and his scholarship and criticism have previously appeared in The Oxford Encyclopedia of American Literature, American Writers, Verse, and Prick of the Spindle. Along with Justin Hendrix he co-edited Poegles: A Short History and Collection (2011).