Fabric: Preludes to the Last American Book by Richard Froude 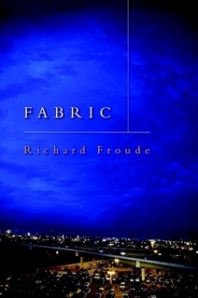 So this is how we will begin: There are five sections in Fabric. The form of the book exists in the nospace between prose and sometimes poetry. There is a list of characters: Alfred, Dorothy Gale, Jackie Robinson, Martin Luther, and others, who materialize on the page as if summoned by distance, drifting in from white space, characters who exist as text and finally are excised by text. This is a book about foraging for meaning amidst coincidence, ephemera, and proximity. But to read Fabric for the discovery of meaning is a false pursuit.

So this is how we will begin: The title of the first section, “Type,” gestures towards two definitions of the word: a number of things sharing characteristics that cause them to be regarded as a group and the origin of the word itself: impression. “What I mean is, I am interested in sequence,” begins the “I”, the writer, on the first page. What follows in “Type” and throughout the book, is discovery in sequences of coincidences: Deleuze committed suicide 73 years after Tutankhamen’s tomb was unveiled, and Cortázar suggests we begin Hopscotch on page 73. We learn that 1982: was the year the writer’s sister was born, is a “silent movie,” marks Atari’s release of “Pole Position,” is remembered as the year Dorothy Gale spent her first night in a city, is a eulogy. These characters and events share the particular characteristic of a year. Unlike David Markson’s assemblage of fact and the “synthetic equilibrium” created therein, Fabric is not a collage. The difference is that of equilibrium and a direction of progression. Fabric is a mapping, a textual rendering, of how neural impulses bound across synapses, empty space, to communicate and create. If we read it only once, we will get the impression that the electricity of juxtaposition created between these connections is where we will find meaning. But this is only what happens in the beginning.

So this is how we will begin: Fabric must be read through the lens of Edmond Jabés. The “I” of the writer in Fabric becomes a copse of identities. “If we say ‘I’,” writes Jabés, “we already say difference.” And we do feel as if we are voyeurs, tracking the “I” as it dips into the missed stitches of white space, watching the identity of the “I” slip in and out of contradiction and coincidence, until it becomes a voice without a body. This voice may be responsible for asking questions and answering them, and it might perhaps wear the mask of another’s name. We, the readers and the writer, succumb to the uncertainty, and in this way Froude has disturbed this notion of difference. “Am I to play Alfred?” the writer asks in Section 3, “I think so, for now,” he answers himself. We were introduced to Alfred in the early pages of Section 1: “Alfred died in the early hours of New Years Day, 1913.” He will die another death in Section 4: “I have been calling him Jackie but his name is also Alfred. I can carry him no further.”

Jabés says that “Writing a book means joining your voice to the virtual voice of the margins,” but what are we to do with a voice that begins in the margins? The “I” on the first page tells us that he only knows his name “begins with the letter R” and that he was “named after nobody in particular.” As the book moves forward, we realize as we arrive at the last pages that we are not at the end, but an end. We are again at a beginning; in the last section, the preface, the writer announces: “My name is Richard.” It is in the writing of the book that the writer sheds his uncertainty about beginnings. “You are the one who writes and is written,” says Jabés. Yet this declarative, “My name is Richard,” and this sense of triumphant certainty we experience is fleeting and then followed by a statement that melds Richard with the Tin Man, who has become the main character of the preface: “I will follow you anywhere if you promise a heart that really ticks.” Richard has become a character, something the “I” never was because “Richard” was not our “I” in our first beginning. But we are ahead of ourselves.

So this is how we will begin: Maurice Blanchot explains that the fragment is “a noun, but possessing the force of a verb that is nonetheless absent.” The fragments in Fabric are pregnant with potential energy, a force that cannot be articulated until it is unleashed into the blank between fragments. Two-thirds of the way down a page we read that the writer is “formulating various ways to achieve proximity. Such is the movement achieved by prayer:”

The colon opens up to a white space so close it has become distant, a silent noise. This is the most articulate explanation of prayer I have ever encountered. This is how the review should begin.

So this is how we will begin again: As we follow the trajectory of fictional coincidences woven into fact, a kind of architecture develops. “I tried but could not write the city,” the writer explains just before the preface. Kevin Lynch writes in The Image of the City that “a city is a construction in space, but one of vast scale, a thing perceived only in the course of long spans of time,” that no part of a city, “is experienced by itself, but always in relation to its surroundings, the sequence of events leading up to it, the memory of past experiences.” The writer in Fabric has written the city; when he laments, “I tried but could not write the city,” he is wrong; this is because he sees the city as a destination, not a sequence, organic and with a memory porous, vibrantly moving through time. He thinks he cannot write the city because he is already in it—an urban center of fact and personal vignette, decayed by the writer’s movement within it.

So this is how we will begin: It is fitting that Fabric begins with a quote from Edmond Jabés if only for this: Jabés’ birth certificate stated that he was born two days before his actual birth. Jabés explained: “The first manifestation of my existence was that of an absence that carried my name.” Fabric begins with the writer stating only the first letter of his name: “I know that my name begins with the letter R.” The writer exists without a name, but even the details of his first existence are in question in the first section: “I was born on a Tuesday. Or a Wednesday.” This doubt is an invitation to discovery: if consciousness is, as explained by Sartre and paraphrased by the writer in Section 1, “a constant reappraisal of the past in the light of a projected future,” where does the “I” exist who does not have an origin to reappraise? This is a generative place for the writer throughout the first four sections; “death seems both distant and inevitable,” says the writer, who is unsure of the facts of his birth, the writer who is writing to find them: “All I want is for these echoes to find their origin: the particular measured sound that birthed this sequence.” It is in the final section of the book where the birth has become, within the disappearance of all other characters: “My name is Richard.” But we know that this is not the end of the book because of the last lines: “This evolution, comfort in that it will never arrive.”

The last chapter, a preface that attends the end of the book, is the beginning of the next book. It is a preface for a different book. “Thus we are first led on and then abandoned by every fraction of a second of our life. So that we can bear witness only to this abandonment” (Jabés).

So this is how we will begin: We have not discussed how death, Giotto di Bondone and his perfect circle, movement, a pitcher’s no hitter on LSD, GOD, THE DASHES, dreams, OZ, and distance all act as rafters for the architecture of this narrative, this attempt to make sense of an identity. These are for the beginnings of a new review.

So this is how we will begin: each fragment in Fabric is a place of beginning and becoming, only to be thwarted by the next fragment, which begins again, anew. Because Fabric is a book of beginnings infinite.

Richard Froude was born in London in 1979, grew up in Bristol, and came to the US in 2002. Excerpts from Fabric can be found online at Conjunctions, Tarpaulin Sky, and Wolf In A Field, as well as in print journals Bombay Gin and Pageboy. Most recent writing is in Witness, Birkensnake, and Slack Lust. He is an associate of the Arts and Humanities in Healthcare program at the University of Colorado School of Medicine and works with palliative care patients at UC hospital. He lives in Denver with his wife Rohini. All of this and more at www.richardfroude.com.

Jess Stoner lives on an island off of Wales where druids once were and black sheep still are. Her first novel will be published by Short Flight/Long Drive Books (a division of Hobart) in 2012. She sometimes talks about things at http://jessstoner.com/.