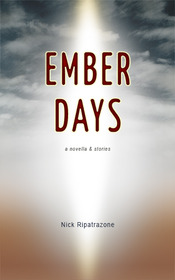 Explosions await in the stories of Nick Ripatrazone’s collection Ember Days. In the novella that gives its name to the book, set in 1975 New Mexico near the White Sands Missile Range, the main characters are still caught in a metaphorical blast zone where atomic bomb testing took place thirty years earlier.

Blake helped to build the bomb, specifically a casing meant to contain plutonium if the blast went wrong, but supervisors put it aside before the test went off. The casing still exists, a landmark tourists take their picture with twice a year when the range opens to visitors.

Ortiz, native to the land, refused to move on when the government insisted he do so. He lost everything to the test; his family, his livestock, his house, all of it dead or gone because of the bomb.

And Nuss, Blake’s older brother, came to the desert because of its barren nature. The book begins with Nuss summoning Blake because he’s sick and dying:

Nuss laughed. “Christ. The bombs’s radiation has soaked into everything. They should have listened to you about that casing.”
“That was only meant for a bad test.”
“It’s all a bad test. The goddamn desert is all soaked. We’re fucked.”

Blake and Ortiz set out into the desert to uncover money Nuss buried near the first blast bunker on land since claimed by the range. Or perhaps it’s so Ortiz can live off the land that served as his refuge and rehab for so long. Or so Blake can return to the site of a test that’s had him running scared for decades.

It was Ortiz’s desert. But Blake’s bomb. Blake hadn’t come to apologize. He had come to claim what was his.

Their journey through the desert exists in tightly-packed sentences that demand the reader’s full attention. Ripatrazone’s poetic skills are useful in this prose; every word is interrogated, every color used in the desert’s palette. At times the author swims deeply in this poetry, and the reader can become slightly disorientated with the characters. “He had dreams within dreams and saw the desert in black and white, and imagined peeling off his own skin and touching bone and feeling real.” But then he pulls back to the action with concise prose that propels the story forward. At just under fifty pages, the world of the novella is hard to extract oneself from and should be read it in one sitting.

Ripatrazone’s voice is clear in the seven shorts following the novella, but each story has its own personality and tone. The prose bends and extends, like songs on a robust album, each a work of art in the tune of varying narrative keys. In “Alameda”, parents raise two daughters alongside a secret grief for their first child who didn’t live to meet her sisters. “Afterimage” and “The Good Children Hunt” are voiced by younger brothers trying to find their fit into a family where the role of son is already cast. Byrne runs punishing sprints through football practice and his adolescent life in “Nines”. War and a girl divide the brothers in “The Cribbing Collar”. The atomic testing site is revisited through the experiences of new characters in “Penance”. The closing short, “Retreat”, relays the story of three siblings navigating the sexuality of secrets and adolescence with a unique grace and humor that hits unexpected notes.

The central mood of Ember Days leaves the reader with a sense of beauty and reverential wonder in the aftermath of tragedy. These stories, told by another, could march across the page on a bleak horizon. From Ripatrazone, they are harbingers of light, rebirth, and endurance.

Nick Ripatrazone is the author of several books of fiction, poetry, and non-fiction, including Good People. He is a staff writer for The Millions. His fiction has appeared in Esquire, The Kenyon Review, and Shenandoah, and his essays have appeared in The Sewanee Review, Commonweal, and on National Public Radio. He lives in New Jersey with his wife and twin daughters.

Jenny Ruth Partica holds a B.A. in creative writing from Susquehanna University. Her professional writing has won several regional awards and a national award from the Council for the Advancement and Support of Education (CASE). Jenny Ruth currently resides in a small and sociable town on the Susquehanna River in central Pennsylvania. She lives with her husband, son, Newfoundland, Siberian husky, and long-haired cat. She vacuums at least twice a week.