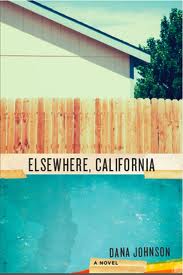 Avery Arlington, the heroine of Dana Johnson’s novel, Elsewhere, California is an African American woman whose parents moved from Tennessee to Los Angeles just before she was born. She is the first and only member of her family to attend university. She is an artist and she is married to a successful and wealthy lawyer who happens to be an Italian immigrant. Which is another way of saying that Avery Arlington, a black woman, is married to a white man. Avery Arlington loves baseball and music. Avery Arlington has a complicated relationship with her past and several of the people from her past, especially with her cousin Keith and, to a lesser extent, with her childhood best friend Brenna.

Elsewhere, California is the story of this woman at a particular crisis in her adult life, a crisis that has its roots in her childhood and her particular journey to adulthood. Structurally, Johnson tells this story by weaving a retelling of Avery’s childhood events through the narrative of a single, representative day of her adult life. Avery’s crisis has everything to do with identity, and it’s fitting then that when we first meet Avery, she gives us a detailed description of herself:

They looked at me and this is what I thought they say. A success story. A bright and articulate woman. An affirmative action baby. A bourgeois snob. A hard worker. A whiner. A well-dressed woman. A whore. A woman who spread her legs for a nice place to live. A woman who wanted to be an artist, who was not really an artist. A charming, smiling, elegant liar. They didn’t tell me that this is what they saw. I already knew. I already thought I knew. I was already negotiating the twists and turns of the people and personalities I could be to anyone at any given time…

This passage from the prologue of the novel (a prologue that sets up, perhaps unnecessarily, a framework in which Avery is telling stories to a hypnotherapist) also summarizes the novel’s psychological preoccupation. Avery, having had to negotiate two very different worlds—the one of her upbringing and the one of her adulthood—is unable to settle herself, unable to decide on any single interpretation or representation of her identity. She is fractured, paralyzed, unsteady.

Johnson uses language as the single greatest indicator of Avery’s identity shifts. As a child, she speaks and thinks in African American Vernacular English (AAVE), which is the language of her peers and family, but as an adult she has opted for a flat all-American accent and dialect. She’s done this linguistic switch quite consciously:

I sound as though I come from no particular place at all. My flatness started out as a costume, a disguise—hand-me-down words accessorized with various inflections until at last, without even realizing it, I’d settled on the voice I now have, a voice that goes anywhere with anything. Flat. But my lack of accent is only half of it; the other half of it is that one must have the right kind of accent, phrasing and diction, the kind that opens a door and lets you in.

Avery understands the way that language works as a door between cultures because she’s been paying keen attention to speech patterns and the importance of words since she was a child. And Avery is a tester, interested in trying out words and phrases from other people— from Brenna’s poor, white and overly permissive family; from Joan, a kind and elderly white neighbor; from the young women of different cultures she meets in college; and even from her own family, those in California and those in Tennessee. To Avery, language is intricately bound with identity and so as Avery learns to speak several “languages,” her identity begins to crack and splinter.

This identity crisis begins young, and Johnson does a great job of showing the multitude of awareness moments in young Avery’s life, and the miniscule alignment choices that she makes, both with positive and negative repercussions, as she moves forward from child to adult and her world changes and shifts. There’s a complex negotiation going on here—who does Avery want to be? What are the boundaries to her identity and who or what has put those boundaries in place? Johnson doesn’t shy away from the more delicate questions of race and prejudice, and although the novel has what I would call a gentle narrative, it doesn’t pull its punches either.

Elsewhere, California is definitely a book that looks carefully at some of the fundamental tensions between America’s different cultures—African American, white American, Hispanic, immigrant culture. Indeed, one of the novel’s main preoccupations is with the fissure in lifestyle between Avery, Brenna and Keith. This three-point relationship sits at the heart of Avery’s identity crisis. It is in looking at these other two people that she can both find herself within her own history as well as locate all the points of her departure.

The day that we meet Avery as an adult involves two serious events: the first is a break-in and burglary at her home in which Keith is the main suspect, and the second is Avery’s second gallery showing. In essence, these two moments are distillations of her past and her present. In that sense, they are perfect as the foundation for a discussion of where she came from and who she is now.

Consistent along that journey from past to present is Avery’s fundamental personality—a part of the “who she is” that never changes. Avery is, more than anything, a collector and cataloguer of culture. Even as a child and teenager, she is watching and gathering information—pop culture icons, fads, music, baseball stories, children’s stories from traditional white America, the Roots TV miniseries, popular images and sayings. At first, she safeguards this information for herself, sometimes creating fantasy worlds that blend it all together. As her identity crisis gathers momentum, she produces drawings and collages that play with irony and juxtaposition. And when we finally meet her as an adult, she’s found a way to express her own fractured identity in a way that reveals the importance of memory, culture and identity. As a person who has stood upon the thresholds of those swinging doors between cultures, as a person who kept the words from one and learned the words from the other, Avery is perfectly poised to act as a double-sided mirror. To use her art to call into question the cultural definitiveness of items and images.

And this is the ultimate cleverness of what is already a careful and provocative book. As Avery, through her art and developing understanding, reminds us that story and the connective strength of narrative is more important than stasis and fixed ideas, so is Johnson, throughout the novel as a whole, emphasizing the power of storytelling. Story is what moves us forward, story is what brings us together.

Once you know someone’s story, or even pieces of it, it’s hard to dismiss them to pretend you know all there is to know about a person. […]

Just look at a person holding his heart in his hand, with parts of it all torn up, as his way to explain something—that’s all I’m asking of anybody.

Dana Johnson is the author of Break Any Woman Down, which won the Flannery O’Connor Award for Short Fiction and was a finalist for the Hurston/Wright Legacy Award. Born and raised in and around Los Angeles, California, she is an associate professor of English at the University of Southern California.