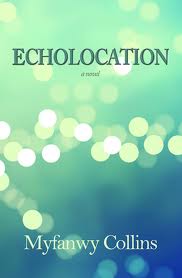 Animals like bats and dolphins echolocate because it is an effective tool for navigation in a low-visibility environment, in darkness or troubled water, for example. In the simplest terms, to echolocate is to shout two simple questions, “Where are you? Where am I?” and then wait for an answer. The answer comes as an altered repetition of the original question. So echolocation can be understood in terms of intensities and transformations of sound. But it is also a process that cannot achieve its completion alone. Echolocation implies a relationship between two objects. It is about wanting to know where things are in relationship to the self. Used as a metaphor, as Myfanwy Collins has cleverly done by choosing this word as the title of her novel, echolocation conjures up an image: a shouting out into the darkness, a careful listening for the transformed return of that first offered sound. This idea contains both action and stillness, both hope and potential failure.

There are three women in Echolocation, women who have found themselves living in a kind of darkness. First is Geneva, who has returned to care for the foster mother who raised her. Geneva’s darkness has taken her by surprise, the result of a series of traumas, of physical and emotional separations. She eventually invites Cheri, her pseudo-sister, to help her, and when their Auntie Marie passes, to share what remains of their childhood home. Cheri’s darkness is of a more psychic variety, self-imposed, self-defeating. Finally, Cheri’s mother, Renee, is heading toward these two after years of absence, carrying the weight of her past as well as a new burden.

The book moves forward as these three women attempt to re-situate themselves, both geographically, in the sense of their return to an earlier home, but also psychologically. The “Where am I? Where are you?” is also a “Who am I? Who are you?” In this sense, Geneva, Cheri and Renee are engaging in a kind of spiritual echolocation—with respect to each other as well as the obstacles in their path.

It goes without saying that any mention of bats in a novel called Echolocation will carry certain weight. Collins handles this with great care. Bats are mentioned at length on one occasion only, in a scene of backstory, but one in which the meaning isn’t easily pigeonholed. The beginning of that scene involves a memory trigger—Renee, still in Florida, sees feeding birds swooping over the ocean and thinks of bats in upstate New York where she grew up, and to where she will soon feel the need to return:

There didn’t seem to be as many bats in Florida as there were back home. At least not near the ocean. Could be that the constant wind kept them away, or maybe it was the open space with nothing to bounce sound off of but air and sand. Not like in the mountains, among the piney woods, flying low above the lake—sound echoed endlessly there, sound upon sound. She thought of the twilight sky at home and saw it as one mass of bat bodies, black and flapping, winged, moving forward, pushing away, pursuing.

The notion of escape and pursuit is strong here, as is the image of home as sinister but vibrant. Bats elicit complicated reactions as images of these dark, furry creatures can be both negative and a source of mystery and joy. Collins subtly and gracefully mines their multifaceted symbolism.

But there is more to Echolocation than the imagery suggested by the title. The three women in the novel do not come as whole beings to the story, nor will they be made whole by the events that transpire. Collins is dealing with broken individuals and a story that attempts repair but cannot help creating new fissures.

There is also a strong ribbon of religious discussion threaded through the novel. God is something that the women in Echolocation wonder and worry about. Interestingly, whenever God is mentioned, so are words like desire and want. The two concepts—one metaphysical, one physical—remain at odds. So is the idea of love held in tension; for Auntie Marie, for Geneva, and to some extent for both Cheri and Renee, thoughts about love and thoughts about God are intertwined but not always complementary.

God also figures strongly in the minds of two minor characters in Echolocation, Terry Plunkett and his wife, Iris. Collins has written these two in stark terms: they are poor, alcohol-addicted, intellectually simple, God-fearing to the point of superstition and, under most circumstances, either pitied or forgotten by the small society of the novel. And yet they both become divine-like catalysts for the story’s conclusion.

Echolocation is a slim novel, elegantly written and carefully scripted. Collins has a knack for placing her characters in settings and situations that reflect their quiet feelings of emotional displacement. All of this makes it easy to call this a “beautiful novel.” And yet, it would be fair to say that Collins does not make it easy for her readers to feel comfortable with the arc of the story. Echolocation is not a straightforward tale of sorrow transformed or redemption found. The book involves serious violence—acts, both suffered and perpetrated, that do not leave a person undamaged. That cannot leave a reader complacent.

So yes, Collins makes beautiful art out of terrifying and grim realities. That she does this with so much obvious love for her characters is what makes Echolocation more of an elegy than an exposé. This is compassionate fiction, thankfully still clear-eyed and penetrating, but more than anything else, it is merciful.

Myfanwy Collins was born in Montreal, Canada, grew up in the Adirondack Mountains of New York State, and now lives on the North Shore of Massachusetts with her husband and son. Her work has been published in The Kenyon Review, AGNI, Cream City Review, Quick Fiction, and Potomac Review. A collection of her short fiction, I am Holding Your Hand is forthcoming from PANK Little Books in August 2012.