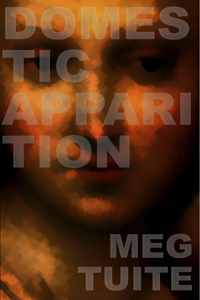 Meg Tuite’s new novel, Domestic Apparition, describes the life of a young woman named Michelle who navigates the mean streets, and meaner Catholic schools and dysfunctional homes, of a working-class American childhood. Michelle idolizes her intelligent but troubled older sister, survives the abusive rage of her father and the nuns who teach at her school, and watches her mother, a woman who cut short her youthful dreams of becoming a writer, disintegrate under the pressures of a bad marriage and a large family. Although the novel could have spiraled downward into a simple accounting of battle-weary characters and painful lives, it is transformed by Tuite’s perceptive pen into a compassionate look at human vulnerability, and a keen examination of the emotional defenses human beings create to survive.

Tuite has an extensive publishing record and many of the chapters in Domestic Apparition first appeared as individual stories and flash fiction pieces in literary journals. To structure the novel, Tuite fused them into a single, first-person narrative. Most of the chapters are narrated by Michelle, but one consists of a letter penned by an aunt who feels compelled to explain how her own marriage went wrong. This inclusion sheds light on the larger community that surrounds Michelle and her family, and adds a sense of entrapment and inevitability that informs the narrator’s increasing desire for escape.

Tuite’s writing style is brash and direct; she makes no attempt to draw in the reader with lengthy descriptions of character or setting, or a slow-burning build toward the action. Instead, each chapter tosses both the protagonist and the reader into the middle of a scene taking place in a chaotic, complicated world. That world, we soon discover, is packed with deprivation, emotional need, violence, and deeply felt characters.

The story begins, for example, with two sentences that could describe the narrator’s entire life, although they are focused on her first experience at school:

When I turned six I became victim to one of the many human abuses of dumping a child out of the back of a station wagon into the snot-filled clutches of a pack of anonymous kids. It was an enforced group dynamics that came with all its paranoids, masochists, and victims for no other reason than that we had turned the same sinister age of the draft, and as it was a Catholic school in the early sixties, abuse was not only condoned, but expected at any and all levels.

From the start, Tuite makes it clear that she will not flinch in her depiction of Michelle’s gritty, working-class life. Her prose continues, throughout, to be straight-shooting and decidedly unsentimental. She describes one teacher, for example, as:

…a myopic, old woman with a pink barrette and brown teeth who spent a large portion of her day trying to figure out what her pension would be if she quit that afternoon…

Domestic Apparition follows the narrator from Catholic school into high school, to beach parties full of stoners, to a state college where one of her room-mates is gang-raped, and finally into the offices of a dog-eat-dog advertising agency where Michelle lands her first real job. Tuite’s sentences are compelling and forceful, and often unsettling. Character descriptions are especially biting, and create striking images that transcend their immediate subjects to outline their place in the world:

His fabricated face, pliable in its chilling meteorological leaps and depths, ravaged over his features like a typhoon blasting through a village built on sticks.

One could read this book over and over, and pick up something different in each sentence or description every time.

Domestic Apparition isn’t a pretty book; it is as tough as its narrator. It challenges the reader to see past convenient, academic definitions of class and society, and to focus instead on the human beings struggling to survive within them. Although the content is at times disturbing, beneath it all is an aching, redemptive compassion. For much of the book, Tuite keeps her readers at the same emotional distance her narrator cultivates to survive. But she reveals, in the end, what happens when the truth, and vulnerability, finally kick in. Ultimately, Tuite challenges her readers to throw off the illusions we create about ourselves and our lives, and to feel what is real underneath.

Domestic Apparition is a powerhouse text, a quick read, and a book you won’t soon forget.

Meg Tuite’s writing has appeared or is forthcoming in numerous journals including Berkeley Fiction Review, 34th Parallel, One, the Journal, Monkeybicycle, Hawaii Review and Boston Literary Magazine. She is the fiction editor of The Santa Fe Literary Review and Connotation Press. She has a monthly column “Exquisite Quartet” up at Used Furniture Review. She blogs at http://megtuite.wordpress.com

Faye Rapoport DesPres holds an M.F.A. from Pine Manor College’s Solstice Creative Writing Program, where she focused on Creative Nonfiction. Her personal essays have appeared in Ascent, damselfly press, Eleven Eleven, Hamilton Stone Review, International Gymnast Magazine, Prime Number Magazine, Superstition Review, and Writer Advice. Her fiction and poetry have appeared in Void Magazine and In the Arts, and her reviews and interviews have appeared in Fourth Genre, InterfaithFamily.com, and The Writer’s Chronicle. Faye lives in the Boston area with her husband, Jean-Paul, and their four cats. Her website is: www.fayerapoportdespres.com.
Share This