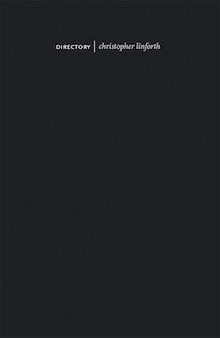 Prose poem, flash fiction, micro-fiction fragments, segmented miniaturist vignettes; whatever the label, the undergirding question of definition and categorization is: Can it survive in readers’ minds? Can it carve out space in literary memory, attain posterity, and become that thing people talk about when they allude to “pitch perfect” or “encapsulate” or “a portrait of our times?” Can it become an artwork that distills? Alembic fiction is what Christopher Linforth aims for in his new interconnected collection of flash fiction Directory.

Linforth’s is a mirroring and recursive text, one which effectively and incisively incarnates twin masculinities, femininities, and gender fluidity in an era that is very much post–internet porn, post–surveillance state, and mired in the religion-less present of the educated classes. However, it remains less than urbane and avoids hipsterism to retain a streamlined rusticness, a rurality. Directory’s rogues’ gallery of rakes, rapscallions, and rascals, of hoydens, harridans, and doyennes, gestures semaphorically at abandoned subjectivity. This is evinced in this collection’s recurrence of apparatuses, an unpacking of the colonization of the human by technologies, particular analog ones — pre-cellular telecom and pre-digital photography — familiar in the films, photography, and paintings of David Lynch.

Linforth’s twins and triples are anti-hero eavesdroppers from start to finish, recalling things they shouldn’t have seen or heard, like Jeffrey Beaumont in Blue Velvet peeping at the extremely grown-up world from inside Dorothy Valens’s closet. As in Lynch’s famous movie from the last pre-internet decade, incest rumbles throughout. Noticeable immediately is that the linked stories are all narrated in the first-person plural perspective. If there’s an inconsistency to these narratives — and there is, as in almost any short story collection — it’s not long before the paternoster elevator offers a different floor along its descent. And Linforth’s tonal consistency, abutting the horrific without relying on an abundance of gore or shock value, indicates that his ambition is to take his readers plummeting.

Linforth’s iterations of violence — pre-natal, random, familial, vicious, nihilistic, and criminal — are quite stirring. The pervasive notion of trying to sear something onto the reader’s imagination in a trenchant way is palpable, and while the presence of violence perpetrated, absorbed, or witnessed is occasionally obtrusive, it is not unintentional nor uninteresting. The ravages of aging as the trauma we’ll all endure should we live long enough is an area of particular acumen.

The grandmother dying of endometrial cancer in the one-paragraph story “Terminal” deserves singular praise. The “we” twins are told by a dentist that their mercury fillings need to come out lest they suffer brain disease or stroke. Their response is that prosopagnosia has its upside:

In the years since this warning, we have wished for neurological impairment to help us forget…Her death-face had stiffened her jaw, thinned her scraggly gray hair. Her lids were slightly open, the sclera of her eyes a sickly yellow. We took her silver pendant before they carted her away on the gurney.

Linforth’s kid characters are preternaturally smart, if unwise, and robustly clever, if uneducated. They are far from privileged, as captured in a piece like “Procedure” that begins:

The PICC line sits flush against her arm. We watch the nurse slide the catheter into our mother’s cephalic vein, probe deeper inside of her. Our mother, swaddled in hospital white, looks away from her body. Her gray eyes lock with ours. Progeny, she always calls us. Not children or kids or daughters, but progeny.

This movement away from the sentimental is a thesis statement for Linforth. Not that the collection is didactic, but its milieu is certainly not scored by flourishes of ominous dread or swellings of metaphorical cellos and violins. This author cherishes the understated.

Are there moments where this all feels too much like the musings of seatbelted suburban kids on a cross-country trek in the back of a station wagon imagining what it’d be like to rob liquor stores? A couple. “Pitstop” is one of the few real offenders, though of the forty-one pieces in Directory there are only two others that really fail (including “Race,” a sort of dumber Blake Butler knockoff). The hiccups are quickly redeemed by shard stories that evoke aubades and alba, Old Occitan and E.T.A. Hoffman (“Folktale”), or that disorient and disconcert by initiating the pebble-rippling effects of defamiliarization, like when the reader is instantly transported to a DeLillo-esque NYC in a fantastic religion-and-gentrification conflation titled “The Temple.”

There is a strong LGBT/Queer Studies seam running through this book that falls somewhere short of the sublime transcendence of Dennis Cooper but much farther from memoirish alt-lit hackery. Syntactically controlled but spirited in its content, the sexual subject material installs a vision of the world that is dark and violent towards non-heteronormative individuals while not at any point inscribing a predictable victim narrative. Instead, it explores the othering endured by members of the LGBTQ community (as well as pansexual and polyamorous individuals) by marshalling elements that foreground both mainstream and underground experiences of non-binary sexuality in the American environment where Linforth’s young characters discover and explore their burgeoning desires.

The biggest take-home is that the protagonists are better off for their un-idyllic childhoods. Rebellion is a tough subject to quantify or approach with originality, but despite the limned and uber-attenuated comportment of the flash fictions, they make a niche for themselves in the readerly consciousness.

What is the incentive to read it? How does Linforth earn the ear’s alertness? These tatterdemalion mini-stories recall an exquisite combination of luxuriant language choices and a tightly woven compression unique to the flash fiction form.

Our grandfather didn’t die by an executioner’s ax or by a guillotine blade slicing off his head — though he would have enjoyed the theatricality of both. He suffered a stroke soon after waking one Sunday morning. He lay in bed half-blind, his body stunned, his semi-conscious mind unaware of the blood leaking into his skull. When we discovered his cold corpse, his eyes faced the telephone on the night stand. The handset was off the hook.

This is the middle paragraph of a three-graf story, “Finale,” originally published in Whale Road Review. The grandfather blasts Verdi from a basement. As children, the twins would press their heads together and promise not to die alone. Later, the twins both use Verdi as their alarms. That’s it. It’s a hyphen of a tale, that middle paragraph a narrative itself, a mini-song more than a full-fledged cantata, a wastrel vagary full of characters that most narratives would place in the background or as supporting characters. Their fates point to a consistent thread throughout these stories that an anticlimax can be redemptive instead of disappointing.

The flash fictions also inhabit the title in a corporeal way that merits its status as a book. The pieces in Directory read like stories with a direction instead of an agenda. The generosity of the text, combined with its terseness, reminds not so much in content or form but in spirit of Ken Kesey, also evoked by the Pacific NW setting in parts of this country-spanning travelogue. According to his protégé Lydia Yuknavitch, Kesey once advised his students: “Write like a terrorist just busted in and threatened to kill you all — like you all have a semiautomatic machine gun at your skull.” She’s also described Kesey as the greatest liar she ever met. Linforth shoots for that level of urgency, skill, and artful prevarication.

The penultimate piece, however, commits that egregious literary sin of explaining too much, and at times throughout, the whole exercise panders a bit to the TL; DR crowd, but the final story furnishes a striking and well-wrought symbol. In “Disconnected,” an embedded infinity sign appears, and the twins’ longing for their mother incepts a consideration of the process of the whole damn thing, the encompassing connectedness of birth and death and the entire cosmological universe. The take-a-big-swing-and-actually-connect feeling is achieved. Connection is the goal, after all. The innovations and ruminations condensed within this slim volume — concerned with childhood and helmed by a shapeshifting amalgam of biologically related individuals teaming up to endure human existence — manage to connect the seemingly disparate and atomized, a significant achievement in just over sixty pages.

Christopher Linforth has recently published work in The Millions, Fiction International, Epiphany, Notre Dame Review, Day One, Hotel Amerika, Descant, among other magazines. He has been awarded fellowships and scholarships to the Sewanee Writers’ Conference, Vermont Studio Center, and the Virginia Center for the Creative Arts.

Sean Hooks was born and raised in working-class New Jersey and now lives in Los Angeles. He holds a BA-Liberal Arts from Drew University, an International MFA-Fiction from the University of Nevada, Las Vegas, and an MA-English from Loyola Marymount University. Recent publications include Craft, The Smart Set, Athenaeum Review, The Molotov Cocktail, Entropy, 3:AM Magazine, and Los Angeles Review of Books.