Diary of a Short-Sighted Adolescent by Mircea Eliade 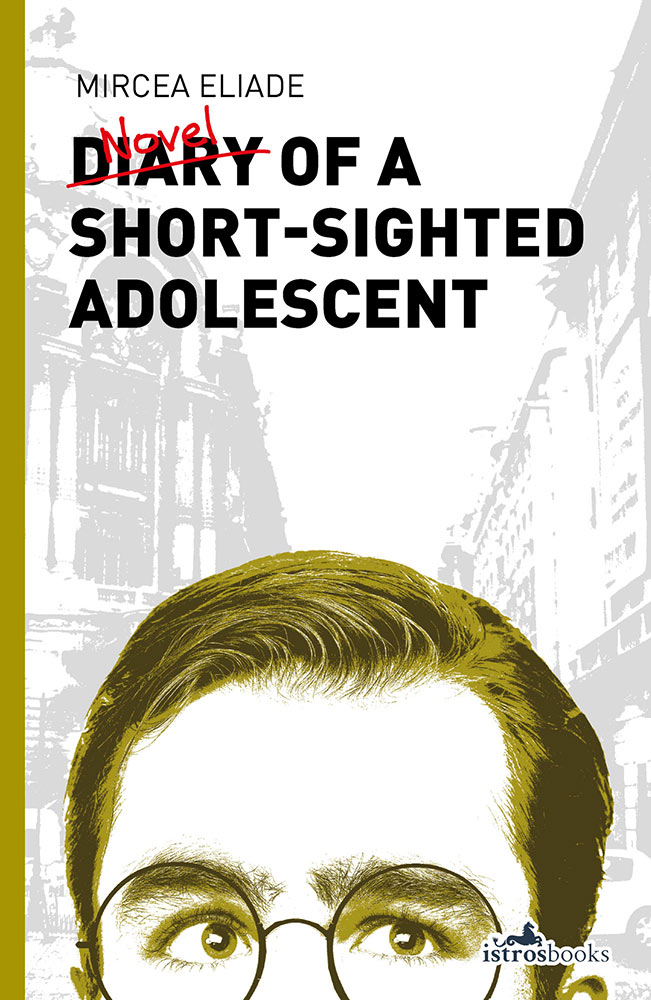 The great pleasure in reading this book comes from the contrast between the erudite and polyglot Mircea Eliade, philosopher and professor of comparative religion at the University of Chicago, and the awkward, geeky adolescent he portrays in this lightly disguised memoir of his high school years.

For those unfamiliar with the life and works of Eliade, here is a quick bio. Born in Romania in 1907, he quickly established himself as a fiction writer, essayist, and journalist in the 1930s, displaying a fascination with Eastern religions but also a rather naïve belief in pro-Fascist ideology. After the war and the installation of the Communist regime in Romania, he went abroad, where he became a highly-respected scholar and historian of religions. His works on shamanism, myths, and rituals are highly influential to this day. He died in Chicago in 1986, sadly a little too soon to see his beloved home country shake off the shackles of Communism.

His novels were all written in Romanian, even the ones that appeared in exile. The early ones are either tales of fantasy (frequently reworking traditional myths), or else accounts of a young man’s quest for self-improvement. The latter are characterized by mostly first person narrative and exploration of the world through eroticism (he was even prosecuted for indecency in the 1930s). Diary of a Short-Sighted Adolescent roughly falls into the second category, although it is far less suffused with erotic deeds and far more with unfulfilled yearnings, as befits the very young age of its protagonist (just fifteen at the start of the diary).

The “I” of the novel shares many of the physical attributes of the young Eliade: weedy-looking, wearing very thick glasses, clumsy, and not particularly attractive. The mental deficiencies may be slightly exaggerated for comic effect. It’s hard to believe that Eliade (who spoke six languages fluently and could read many more) was struggling so much with French and German, although his distaste for math has the ring of truth about it. The novel also shows the self-flagellation (both literal and metaphorical) of a teenager who believes he is destined for greatness but finds himself falling short in most aspects of his life. Although Eliade was only twenty years old when he wrote this, he is making fun of his younger self in all his geekiness, neediness, and self-absorption. The narrator can at times be a pretentious, deluded little twit, but he is hugely relatable to anyone who spends time with adolescents.

The strength of the book lies in precisely those passages where the narrator unwittingly reveals all of his adolescent naiveté and doubts which are both funny and touching. Afraid that he may have to repeat the school year, he decides his only hope is to write a successful novel, based on his life, but spiced up with some romantic interest (although the only girl he knows is his cousin):

That’s what’s preventing me from starting the first chapter. I don’t have a plot. All I know is that I’m the hero. Of course, the novel will revolve around a crisis at the end of my adolescence. I’ll portray and analyse myself in relation to my friends and classmates. But I still have to come up with a plot. And since there can’t be a plot until there’s a heroine, I’ll have to include my cousin. But I’ve tried that, and couldn’t manage a single page.

His first attempts at kissing a girl are disastrous—he ends up chiding her for not being virtuous and seriously embarrasses himself and his friends. So of course he pretends he is not at all interested in girls, that he is all about earnest endeavors in the fields of history, philosophy, and literature. Occasionally, when he is tossing and turning in his hot little attic room at night, he admits to himself that he is not quite as unique and special as he would like to be:

I know what I’m going through: I’m sentimental. It’s pointless trying to hide it. I’m as sentimental as any other adolescent… So I understand now why I’m unhappy. It’s because I didn’t ‘open my heart’ to my friends. I’m just like all the others. I need friends as well. There’s no point in lying to myself… Yet apparently I’m not aware of this. Aren’t I aware that I’m sentimental and weak, completely lacking willpower? Don’t I also dream of blonde virgins, with whom I stroll through the park in the moonlight, or sail on the lake in a white rowing boat?

This is not really a coming of age story, for the narrator does not have a remarkable character development by the end of the book. He gains some small insights into his procrastination, laziness, and delusions of grandeur, but he is still remarkably good at protecting his ego, as this passage from near the end of the book shows. The narrator and his classmates have just taken the oral exam for the Baccalaureate and are not at all pleased with how it went:

In my novel, if I ever write it, I’ll include all the foolishness, all the absurdity of the Baccalaureate. Using many examples I’ll show that only the lucky ones pass, the favoured ones, the imbeciles…. If they had asked me about insects in Natural Science, Romanticism in French, and the geological origins of mountains in Geography, I would have got the highest marks. If they had asked me anything else, I might have got an ‘Unsatisfactory’ in everything. So I’m lucky, but also unlucky. If I pass I’ll just be average, by pure chance. My shortcomings weren’t discovered and my qualities weren’t rewarded. How distressing …

Instead, what we get here are charming and humorous vignettes of life in a boy’s school in Bucharest in the early 20th century. You will find none of the modernist techniques that Eliade employed in his later novels—this is realism with a wink. The boys engage in all the usual adolescent pursuits before the advent of video games: skipping school, long arguments about love and life, trying to pick up girls, amateur dramatics, carol singing, agonizing over friendships and God, reading. One chapter which may shock present-day readers is the one where the narrator and his classmates go to the brothel. This “olde worlde” feel of the narrative is reflected in the language chosen for translation. The original Romanian sounds fresh and contemporary, while the English does occasionally try a little too hard to convey the flavor of the times.

Eliade only published short fragments from this novel in his lifetime. It was found in manuscript form after his death and published after the fall of Communism in 1989. Although the author himself thought it was too trivial for publication, it is a wonderful addition to the cannon of the self-pitying, self-aggrandizing teenage author, which includes gems such as Adrian Mole, Stephen Dedalus, and Holden Caulfield.

Mircea Eliade was born in 1907 in Bucharest, the son of an army officer. He lived in India from 1928-1932, after which he obtained a doctorate in philosophy with a thesis on yoga, and taught at the University of Bucharest for seven years. During the war he was a cultural attaché in London and Lisbon, and from 1945 taught at the École des haut études in Paris and several other European universities. In 1957 he took up the chair of history of religion at the University of Chicago, a post that he held until his death in 1986. Fluent in eight languages, his extensive body of work includes includes studies of religion and the religious experience that remain influential, such as The Sacred and the Profane, and numerous works of literature, including The Forbidden Forest, Bengal Nights and Youth without Youth, both of which were adapted for the screen.

Marina Sofia is a global nomad, temporarily settled near Geneva, Switzerland. She has published poetry and short fiction in a number of online and print journals and anthologies. She spends far too much time blogging and tweeting, and is a regular reviewer for the Crime Fiction Lover website. She is currently working on a crime fiction novel set in Geneva.