Desire: A Haunting by Molly Gaudry 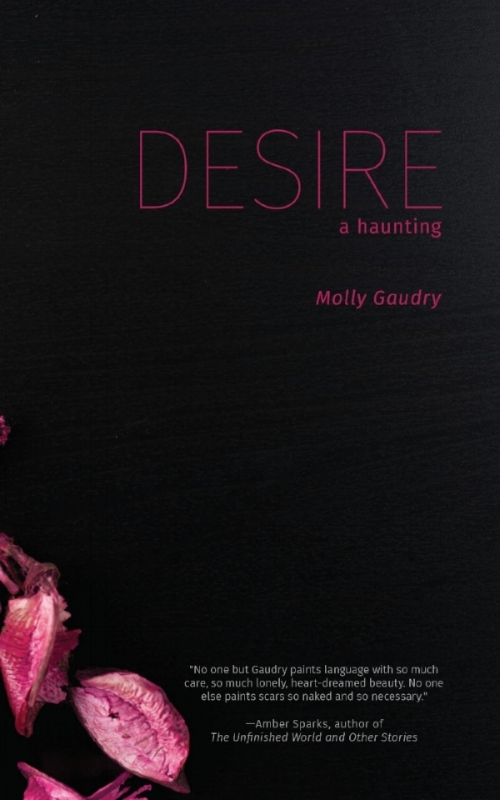 Molly Gaudry’s Desire: A Haunting connects the fairy tale realm to the real world and blends the two entities, so that reality becomes fantastical and the magical world becomes believable. Told through the first person point of view, the unnamed narrator tells us of the history of her life with such characters as Ogie, Zepha, Sam, William, Mother, and Grandmother experiencing pain, love, regret, and loneliness.

Desire: A Haunting is essentially a ghost story about strangers interacting with each other and and their environments, and these strangers themselves are either ghosts or animals. A ghost child, William, enters the lives of Ogie and a character who goes by “dog,” and their worlds are forever changed. Love plays a magical role, woven throughout the story. Full of light and darkness, Gaudry creates a fairy tale to awaken the reader’s soul.

The work is full of subtleties — each word delicate and soothing while at the same time powerful and unbreakable:

at midnight mass alone I listen to the sounds of wind
and rain on darkened stained-glass faces
the smell of so many damp bodies huddled together
musky and warm        inside the hushed church
seeking hope and solace and true believing        makes
me feel as if I have turned good
I drum my fingers against my thighs and pray for
Ogie
I pray for her soul (75).

The choice of such words as, “midnight,” “hushed,” “darkened,” and “drum” contribute to the overall tone of the story while contrasting alternatingly gentle and harsh sentiments. This can also be seen earlier in Gaudry’s work:

in the evening when I come in from my swim
she asks me to follow her and leads me into the forest
under a certain tree she once buried a stone chicken
to its cheeks
I unearth it for her and carry it home
at her command I smash it to bits with a hammer in
the shed
on scraps of paper I tie to each sacrificial hunk
I write our inheld grievances
WHERE ARE YOU
why haven’t you written
from the farthest tip of our tiny peninsula I throw
them into the sea
together we watch        until the final ripple dissolves
into quiet waves (37).

The work doesn’t limit itself to solely the words — the use of white space surrounding the text and within the text creates a world of its own — one that sparks a feeling of mystery or loneliness to the reader. The words themselves become three-dimensional, taking the reader into a realm of the unknown which is found when the real and the fantastical worlds combine. The partnering between the words and the white space forms the realms which exist in the work itself, essentially, mirroring itself through form and content:

Later on in the work, one page is completely blank except for the words, “I had nowhere to go” (216), creating this feeling of being lost both within the story and the white space of the page.

Gaudry is also able to introduce bouts of violence and additional horrifying surreal moments with ease, still adhering to the tone of the work; it’s as if it was an everyday occurrence, and this adds to the fantastical-realistic sensation:

going only on my appearance someone suggested I
might be rabid
a noose was thrown and I was caught around the
neck and taken away on a long pole and soon
subjected to certain needles administered in sequences
over several weeks (170).

This is the magic of Gaudry’s language as she has the ability to combine all kinds of emotions, structures, and worlds — she has created all of the ingredients and turned them into a recipe, producing a wonderful, exquisite meal.

Molly Gaudry (@mollygaudry) is the founder of Lit Pub and the author of We Take Me Apart, which was shortlisted for the 2011 PEN/Osterweil and was a finalist for the Asian American Literary Award for Poetry. The verse novel has been taught at Brown, Wesleyan, Cornell College, Queens College, CUNY, and other creative writing programs in the US. As of Halloween 2018, its sequel Desire: A Haunting is also available. Molly is a PhD candidate and Steffensen Cannon fellow at the University of Utah. Summers, she teaches fiction, flash fiction, and lyric essay workshops for the Yale Writers’ Workshop.

Shome Dasgupta (@laughingyeti) is the author of i am here And You Are Gone (Winner Of The 2010 OW Press Fiction Chapbook Contest), The Seagull And The Urn (HarperCollins India, 2013) which has been republished in the UK by Accent Press as The Sea Singer (2016), Anklet And Other Stories (Golden Antelope Press, 2017), Pretend I Am Someone You Like (University of West Alabama’s Livingston Press, 2018), and Mute (Tolsun Books, 2018). He currently serves as the Series Editor for the Wigleaf Top 50. He lives in Lafayette, LA, and can be found at www.shomedome.com.