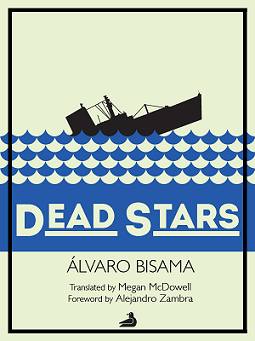 Imagine if W.G. Sebald numbered his paragraphs. Imagine if he shucked many of those long, discursive takes on architecture and history. And imagine he abandoned his peripatetic plots and instead wrote about doomed and melancholy lovers. Perhaps this gives something of the aesthetic flavor of Álvaro Bisama’s novel Dead Stars, published in Spanish in 2010, but only now appearing in an English translation by Megan McDowell, the first from digital publishing house Ox and Pigeon.

Dead Stars is composed of nested stories centered on a newspaper picture of Javiera, as she is being arrested for an unknown crime. This madeleine, glimpsed by an unnamed couple, initiates a long conversation at the Hesperia Café in Valparaiso, Chile, “when the Laguna Verde forests were on fire and the wind from the south blew the black smoke over the hills on the horizon.” The couple is sitting in the sight of enormous mirrors, where their own “dark and twisted” reflections are looking back at them. This fey setting fits the couple, who have settled at the café to wile away their remaining anxious hours as lovers. They have nothing really to say to each other—are only still together for the barest of physical reasons, it seems—and are reading newspapers, the man says, “in order to avoid mentioning what was happening to us in the final hours of our life together.” The status quo is irrupted when the newspaper picture resurrects, directly and indirectly, much of their respective pasts.

The novel’s heart, though, lays with Javiera and her inamorato Donoso, friends of the unnamed woman. It is Javiera—a firebrand, a communist, Youth League member, candidate for office, torture victim of the Pinochet regime who lived to tell about it—whose passions swell the story. While Javiera and Donoso, the pages prove, are a volatile couple themselves, the primary drama is not whether they will be doomed like the man and the woman (something that seems quickly evident) but how exactly the relationship will die. As the woman says, Javiera and Donoso

…lived happily for two years and then it all went to hell. They didn’t break up, but something went rotten. I was there when everything fell apart. That was my good fortune, or bad. To be there, walking along behind them.

Even reconciliation can be tragic. As we drill deeper and deeper into their relationship—they keep splitting and getting back together, despite beatings, miscarriages, affairs, the departure of Pinochet—any hope of reconciliation between the unnamed couple turns to ash (right along with the forest). It is testament to the bleakness of this novel that the dissolution of the relationship between the man and the woman is the closest thing here to a victory. Javeria and Donoso stayed together too long; the man and the woman are intent on splitting up while there are no casualties. As the unnamed man thinks:

I didn’t tell her I’d seen Javiera and Donoso in some photos when I went through her old albums trying to get a look at her face back before we’d met. It was another life…I looked over at the reflection of our life in common, the reflection of my head rising up behind the Hesperia’s bar. That would be one of the thousand things I’d never tell her.

Bisama glides this mystery along, poetic numbered paragraph by paragraph, with packed sentences. Some sections verge on prose poems; the language is always exacting—the result of McDowell’s translation, which captures the plainness in every foreboding detail. The language is straightforward, stripped down, details replaced with metaphors: the woman loses contact with Javiera and Donoso, who became “just rumors…they spoke with other people’s voices, they became echoes”; and reflecting on their life together, the woman tells the man: “We’re the black sea in those photos. The dirty surface of the ocean that everything sinks into.” Like the coffee the man and woman are drinking, the lines are bitter but invigorating.

A literary critic and multiple novelist, Bisama seems to be drilling down into a core idea about the suppression of memories, the very suppression of our pasts, which control our interpretations—and more about us than we realize. Early on, Javiera appears to have moved past the abuse she suffered under Pinochet, but the rest of her life functions as a convincing case against the idea—as a sort of recidivism. Here is a melancholy core, the cryptic agony of what cannot return. The past, the woman says, is “a photo taken in a hotel we wish was our home—false photographs, proof of the life we never had” and “always a newspaper page left behind on the ground…” What we remember seems to be as much fiction as fact: memory “turns into something that only works by hearsay, that works like a story told by someone else.” It is ultimately impossible to distinguish the truth from interpretation: “memory is just an infinity of songs playing one after another like a single indistinguishable murmur…”

In the book’s final section, Bisama does not pull any punches, although the end of Dead Stars is actually a haymaker. After the doomed couple’s connection dissolves completely, and after the horrifying revelation of Javiera is made clear, the entire world goes to shit: “The city burned down, it disappeared. The sky filled up with dead stars.” We have pushed forward, in two sentences, to the end of Valparaiso and then to the end of the universe. Whether this apocalypse is metaphorical is perhaps irrelevant. Even the stars, the eternal lights, must cease. What was a breakup, then, to the death of the universe? Or even love, sex, death, or birth? What was Pinochet? What were bad memories?

Álvaro Bisama (Valparaíso, Chile, 1975) is a writer, cultural critic, and professor. In 2007, he was selected as one of the 39 best Latin American authors under the age of 39 at the Hay Festival in Bogota. Estrellas muertas (Dead Stars), his third novel, won the 2011 Santiago Municipal Prize for Literature and the 2011 Premio Academia, given out by the Chilean Academy of Language for the best book of 2010. His most recent novel, Ruido (Noise), was published in 2013.

Megan McDowell is a literary translator from Richmond, Kentucky. Her translations have appeared in Words Without Borders, Mandorla, LARB, McSweeney’s, Vice, and Granta, among others. She has translated books by Alejandro Zambra, Arturo Fontaine, Carlos Busqued, and Juan Emar. She is also a Managing Editor of Asymptote journal. She lives in Zurich, Switzerland.

Greg Walklin’s reviews and essays have appeared at The Millions and Ploughshares. He is a regular book critic for the Lincoln Journal Star, and has fiction forthcoming in Palooka Magazine.
Share This